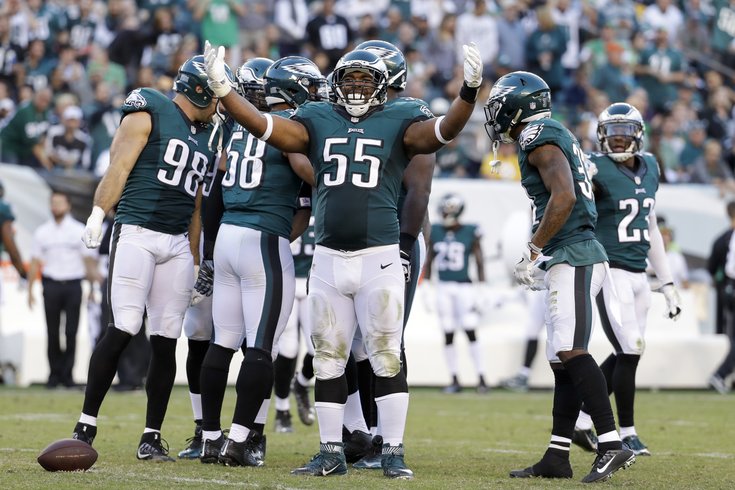 It's OK. Go ahead and give BG some love.

Little known fact: The Eagles could have drafted safety Earl Thomas in the first round of the 2010 NFL Draft, but instead they took Brandon Graham. Has anyone ever noted that?

It's true. The Eagles traded up to the 13th pick and took Graham, and the Seattle Seahawks took Thomas with the next pick. Thomas has gone to five Pro Bowls, he was named first-team All-Pro four times (second-team once), and he won a Super Bowl. You'd think people might have made a big deal about that over the last half-decade.

Anyway, it turns out that Graham has become a pretty good football player, and is having the best season of his career. Let's take a look at what he did against the Pittsburgh Steelers last Sunday:

First, before we get to Graham as a pass rusher, let's take a quick look at him in the run game, which has always been a strength of Graham's. Here he beats the tight end inside and blows up the pulling guard, who is knocked back into the ball carrier. Graham then pops back up and gets the tackle for loss:

Here's Graham beating the RT around the edge, moving Big Ben off his spot, and drawing a holding call:

Here's Graham bull rushing the RT back into Big Ben and knocking them both down:

Here's Graham basically being a bull in a china shop. He beats the RT inside, draws extra help from the center while continuing to push the pile back into Big Ben, and Fletcher Cox cleans up with a weird "in the grasp" sack.

Here's Graham just straight beating his man for the sack:

Here we see the hustle. Big Ben is wrapped up, but Graham never stops, finds the ball on the ground, and scoops up the fumble recovery:

And then my favorite Graham moment of the game -- After hitting the RT with the bull rush all day, Graham makes him look like his feet are in cinder blocks with this wicked spin move. The RG is forced to help on Graham, which leaves Bennie Logan unblocked for the sack.

Brandon Graham isn't just playing well. He's making everyone else around him better as well. We can probably forget about Earl Thomas by now and just appreciate Graham for the good player he has become.