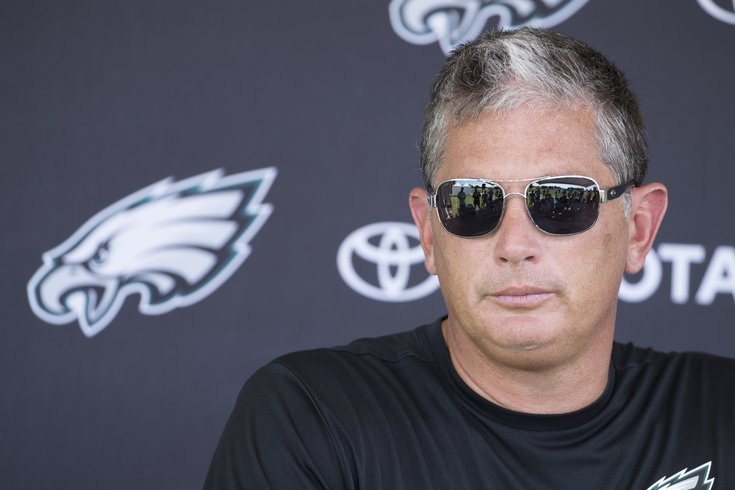 Schwartzy getting some love nationally.

A week ago, despite leading the NFL in point differential at +34, the Philadelphia Eagles were ranked as low as 15th (!) in (meaningless) power rankings on national media outlets. As we know, power rankings are kind of pointless, but we click them anyway. Here's a roundup of where the Eagles "rank" after their impressive obliteration of the Pittsburgh Steelers.

Oh, and our equally meaningless NFC power rankings can be found here.

The Eagles head into their bye week 3-0 behind a rookie head coach and a rookie quarterback who has yet to turn over the ball. The Eagles also have allowed only 27 points through three weeks, best in the NFL.

#JimmyNote: The Eagles have played better than any team in the NFL through the first three weeks, and they are ranked behind the 1-2 Cardinals, who just got stomped out by the freaking Buffalo Bills, lol.

What's not to like about the Eagles right now? They whipped one of the (presumed) top teams in the league. They paid a king's ransom for a rookie quarterback -- a rookie quarterback who apparently didn't impress one particular winless team (this decade, seemingly) -- and he's balling out. Most importantly, Jim Schwartz's defense has allowed a grand total of 27 points in three games ( the lowest figure in the NFL by 10 points). The defensive line played out of sight Sunday night. Ah, the NFL.

#JimmyNote: 6th is as low as you can reasonably place the Eagles.

All the Carson Wentz talk is justified. But Philly has scored the most points in the league and allowed the fewest. A stunning start.

#JimmyNote: That's actually no longer true after Monday night, after the Falcons passed the Eagles by putting up 45 points on the Saints.

It was good for the Eagles to take it easy on Ryan Mathews when his ankle was sore, and give some young tailbacks some carries. Mathews won’t stay healthy all season (he never does), and they’ll need to rely on their backup running backs at some point.

#JimmyNote: Hey, someone mentioned someone other than Carson Wentz.

The biggest surprise of the season has been the Eagles, without question. They’re 3-0 and dominated the Steelers on Sunday with a 34-3 victory. The defense is legit, Carson Wentz has been outstanding, and they’re deep at running back. Philadelphia is officially a contender.

Carson Wentz is off to a great start, but give some love to the defense. That unit has been impressive.

#JimmyNote: The Eagles replace the Giants, who were at 5 last week here.