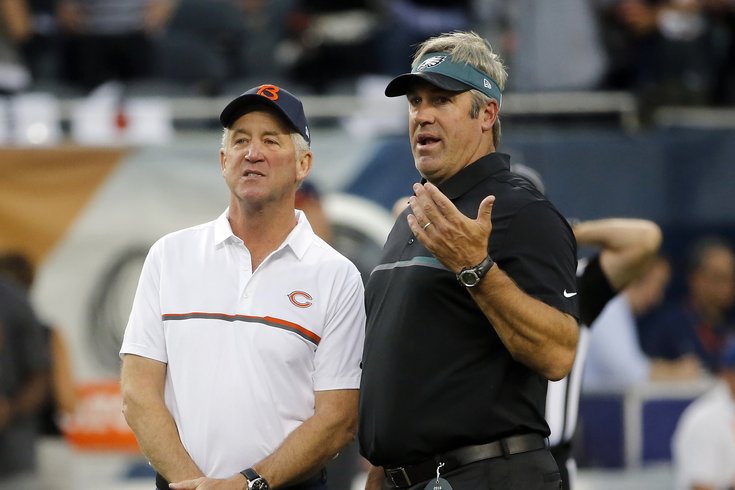 "My early condolences on the top five pick you won't even be around to use, John."

After no Hierarchy/Obituary the first two weeks of the season, it's back! My apologies for that. These things take forever to do (if they're going to be good, anyway), so due to time constraints they'll be a little more sporadic this season, as opposed to an every week feature.

Anyway, let's just get right to it.

Do I really need to write anything here? We all saw how bad this team is already, right? OK, moving on...

Drew Brees' wife must be sick of hearing about how bad New Orleans' defense is.

Chalk this up as a huge win for Chip Kelly and the gang out in San Francisco that two teams are somehow worse than the Niners. Still, this team is really bad, and Chip isn't helping.

As we pointed out last year when we said Chip should be fired, because of the fast-paced offense he runs, the Eagles' offense had more drives (and had to defend more drives) than any team in the NFL over the last three years. As a result, their statistics were often skewed, both offensively and defensively. For example, in 2014, the Eagles were third in points per game and fifth in yards per game. However, they were only 13th in points per drive, and 14th in yards per drive. In other words, they scored a lot of points and racked up a lot of yards because they had more drives than the typical NFL team. But that didn't make them among the most efficient teams in the league.

Conversely, in 2014, the defense was 22nd in points per game, and 28th in yards per game. However, they had the misfortune of facing more drives by the opposing offense than the typical NFL team. In terms of per drive stats, the D was 15th in points per drive, and 7th in yards per drive. The defense was actually efficient, but it appeared far worse than it actually was because Chip's offense put it in an impossible situation to succeed.

And then in 2015 it all fell apart across the board.

So, how are Chip's "per drive" stats so far this year? Well, they're bad, as expected.

Chip also has the lowest time of possession per drive in the NFL, by far, at 1:52 per drive, which is down from his league-worst 2:07 a year ago.

The 49ers don't have a good roster. As such, the smart way to play would be to try to shorten the game by trying to sustain longer, time-consuming drives. Unfortunately for Chip, he has zero ability to adjust to the needs of his team, and only knows how to play one way, which oh by the way, no longer works. Which brings me to this:

In my view, there's little question that Chip Kelly is the worst head coach in the NFL, and it's really not even close.

I got a ton of heat for the above tweet. But the reality is that Chip Kelly's style of play has been figured out by the rest of the league, and he's incapable of adjusting. He is doomed to fail in San Francisco, and anywhere else in the NFL.

The Lions only have one takeaway this season. And they lost to the Titans. At home. And they're missing their best player, Ezekiel Ansah, as well as arguably their second best defender, DeAndre Levy.

But at least they get the Bears this week.

The Redskins suddenly have serious concerns in their secondary, as DeAngelo Hall tore his ACL and is done for the season, while Bashaud Breeland suffered a high ankle sprain, and should be out of commission for a while.

That's less than ideal for a team that is already giving up 30.7 points per game (29th in the NFL), 301.7 passing yards per game (26th), and an absolutely disgraceful 9.0 yards per pass attempt.

Kirk Cousins has gotten a lot of heat for his play early in the season, but the Redskins' defense has been hot garbage.

Many thought Andy Reid disciple Doug Pederson would struggle with clock management in his rookie season as an NFL coach. So far, so good. The same can't be said for Bucs rookie head coach Dirk Koetter, who hilariously didn't call timeout near the end of regulation in their game against the Rams on Sunday.

With 49 seconds left at the Rams 27, down 5, RB Charles Sims caught a pass and was tackled in bounds for a gain of 12 down to the Rams 15. He was tackled with 43 seconds left on the clock. Instead of burning one of their TWO remaining timeouts, the Bucs opted to "hurry up" to the line (I purposely put "hurry up" in quotes), as they tried to run a play, snapping the ball with 26 seconds to go. Awful. Literally any 10 year old playing Madden knows to call a timeout there.

Yada yada yada, the game ended on a Jameis Winston scramble on 2nd and 10, and the Bucs still had one timeout left in their pocket, lol.

The Rams were the joke of the league after their Week 1 embarrassing 28-0 shutout loss to a bad 49ers team, but they have rebounded nicely with a pair of wins over the Seahawks and the aforementioned Bucs.

However, I mean, their QB is still Case Keenum, so they're doomed to another 7-9 season, and Jeff Fisher will get a 10-year contract extension, so there's that.

So the Falcons have scored a lot of points and won two games? Cool. They still have the same problems they had a year ago, when they couldn't get stops defensively in the red zone. On the season in 2015, Atlanta allowed touchdowns on 62.3% of their opponents' trips into the red zone. That was 26th in the NFL, and not that far off from the Saints, who allowed TDs on 67.7% of their opponents' opportunities.

So far in 2016, the Falcons have allowed touchdowns on 8 of 10 (80%) of their opponents' trips into the red zone. The Falcons' defense just isn't good enough to win a lot of games.

Our esteemed Matt Mullin pointed out the difference Cowboys' fan reaction after the Eagles and Cowboys beat the Bears.

Just because that joke needs to exist in stick figure form:

The Giants spent a whole lot of money on their defensive line this offseason, and while they have played better, they still only have four sacks as a team so far this season, only two of which were by defensive linemen. And then there's this nugget from Jordan Raanan of ESPN:

To answer the question, it's not sustainable.

I've been writing for like three years that I've felt that the Cardinals are frauds, and then they end up being good. Through two games, the Cards are 1-2, and were embarrassed Week 3 in Buffalo against a weak Bills team, where Carson Palmer was picked off four times.

Over the next two weeks, the Cardinals get a pair of bad divisional rivals, the Rams and 49ers. If they can't beat both of them, it may be time to start questioning whether this will be a team that returns to the playoffs in 2016.

There is already some panic in Carolina, but let's keep in mind that they lost to a pair of top five defenses in the Broncos and Vikings. This is a tough team that will bounce back.

Including the playoffs, heading into Week 3 Aaron Rodgers hasn't had a passer rating above 100 in any one game in his last 14 starts. Enter the terrible Lions defense, and Rodgers went 15 of 24 for 205 yards, 4 TD, 0 INT, and QB rating of 129.3. Additionally, fat Eddie Lacy went over 100 yards rushing and Jordy Nelson went over 100 yards receiving with a pair of touchdowns.

For one week, they looked like the Packers we remember. If they could sustain that after their Week 4 bye against the Giants (Week 5) and Cowboys (Week 6), the Eagles would be much appreciative.

The Eagles are ranked in the top 10 in the following statistical categories:

The Seahawks have won at least 10 regular season games in each of the last four years, and 46 games overall during that span, although they weren't as good in 2015 as the 2013 and 2014 Seahawks teams that won the NFC. Still, this is a team that will be in the playoffs because of their outstanding defense, which is currently No. 1 in the NFL.

Russell Wilson (Sprained MCL) is a little banged up and the Seahawks' offense looked very shaky the first two weeks of the season, but they broke out Week 3 against Chip Kelly and the 49ers. This No. 2 ranking is really more out of long-term respect.

The Vikings' defense is awesome.

All Sleevie Wonder has to do is check it down and not mess it up, which is kind of the perfect role for him.