Pederson expects Ertz, McKelvin back after bye, plus a Mathews update 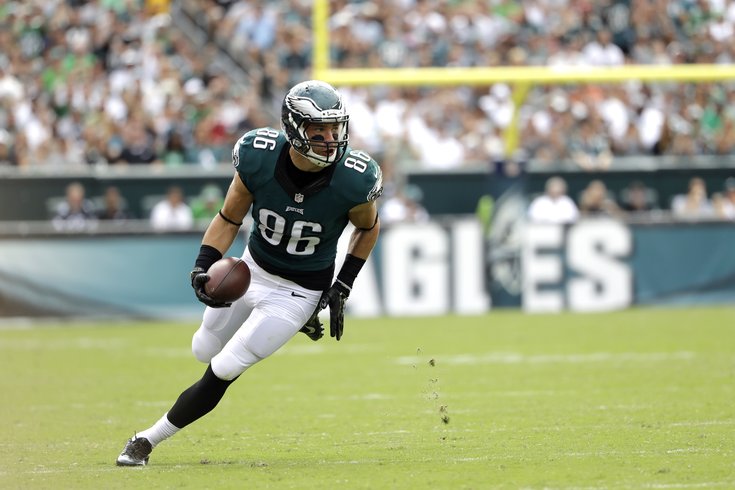 The Eagles were without Zach Ertz for the second game in a row on Sunday.

When the Eagles improved to 3-0 on Sunday with a statement win, a 34-3 rout of the Steelers at Lincoln Financial field, they did so without a few of their starters.

Tight end Zach Ertz (ribs) and cornerback Leodis McKelvin (hamstring) missed their second straight game for the Birds, but according to head coach Doug Pederson, both are expected to be healthy enough to play when the team travels to Detroit to face the Lions following the bye.

Ertz and McKelvin had been replaced by Trey Burton and Jalen Mills, respectively, and played pretty well in their absence. If nothing else, that will give Pederson and the rest of the staff some confidence moving forward knowing that they can use the two backups more often should the need arise.

The Eagles were also essentially without their starting running back against the Steelers. Instead, the bulk of their ground attack went through rookie running back Wendell Smallwood, who scored his first NFL touchdown and led the Eagles with 17 carries for 79 yards. That's because starting running back Ryan Mathews aggravated a nagging ankle injury in the first quarter and the team decided to rest him the remainder of the game.

"Ryan Mathews, last night, his ankle stiffened up on him during the first quarter of the game," Pederson said Monday. "So at that time, we decided to not risk him any further injury there. So that's why he wasn't back out there. Wendell, Darren [Sproles] and Kenjon [Barner] did a great job for us."

If this injury continues to bother Mathews as the season goes on, Smallwood could see his workload increase, especially if he can keep making plays like this:

Nice spin move from Wendell Smallwood on the run that helped set up his TD. pic.twitter.com/zGjP6UGdjJ

Matthews' sore left ankle is the same one that plagued him in the preseason and was tweaked again in the opener against the Browns, so it's definitely worth keeping an eye on.

"It's kind of a funny thing, but it's something that for him, it just never loosened up," Pederson said. "It kept getting stiff and so again, we just opted on the side of caution more than anything else."

The rookie head coach added that when Mathews is healthy, he'll remain "the guy" in the Eagles backfield. That being said, Smallwood could provide a nice change of pace and help keep Mathews' carries down, presumably preserving the veteran back's health.

Finally, Pederson said that rookie guard Isaac Seumalo (pec) is expected to return to practice next Monday when the Birds return from the bye.