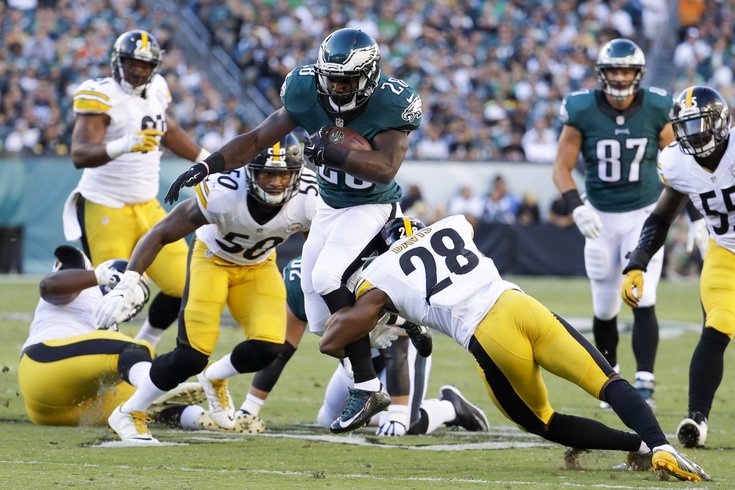 The moral of the story here -- Smallwood has burst.

That burst showed up on his college game film, and it has carried over to the pro level. On Sunday against the Pittsburgh Steelers, Smallwood carried the ball 17 times for 79 yards and a score, and he showed why he had so many carries of 10+ yards in college.

"He’s the same type of runner that we felt he was coming out of college and what we saw in preseason," said Doug Pederson. "He’s a big, powerful guy. He’s a downhill guy. He’s a one-cut runner. He did a great job for us."

Let's take a look at some of Smallwood's runs, in chronological order:

Here's a stretch play to the left, with some fake jet sweep action to the right. Notice that Smallwood is moving fast, yet he's under control. He finds the hole and accelerates through it. Remember DeMarco Murray running this play last year? Big difference in burst here:

Here's a delayed run, where Smallwood sees a crease and hits it. There's no nonsense here. See hole, run through it.

And from a backfield view:

On the next play, same thing. See hole, run though hole, and look at the spin move to finish the run:

And here's the end zone view. This isn't a giant, gaping "college hole." This is an NFL hole, and Smallwood is able to squeeze through the small crease. And again, that spin move... That's a quick-decision spin, as opposed to a spin where he had a chance to set up the defender in the open field. Impressive:

This play got called back on a hold by Jason Kelce, but Smallwood is also good running to the outside on pitches. He does a good job taking the best angle possible to the sticks on third down, then makes a strong inside cut to avoid the corner. Well done, and good awareness of where he needed to get to.

Watch cornerback Ross Cockrell (#31) here. He's in decent enough position to make a tackle. And then... Nope. He tackles the air that Smallwood just ran through:

Finally, here's the play where Smallwood got to the sticks and then purposely gave himself up in bounds to keep the clock running.

"To get the first down and stay in bounds as a rookie is tremendous," said Pederson after the game.

Although he missed a big chunk of training camp and the preseason, Smallwood impressed during the spring, showing the ability to easily pluck footballs out of the air with his hands in the passing game. Pederson has noted on several occasions that Smallwood's receiving prowess is what made him an attractive player to draft.

The Eagles want to move their running backs all over the formation, trying to get mismatches against opposing linebackers. That might be the best aspect to Smallwood's game, and we haven't even seen that yet.

But certainly, what he showed as a runner on Sunday was encouraging.