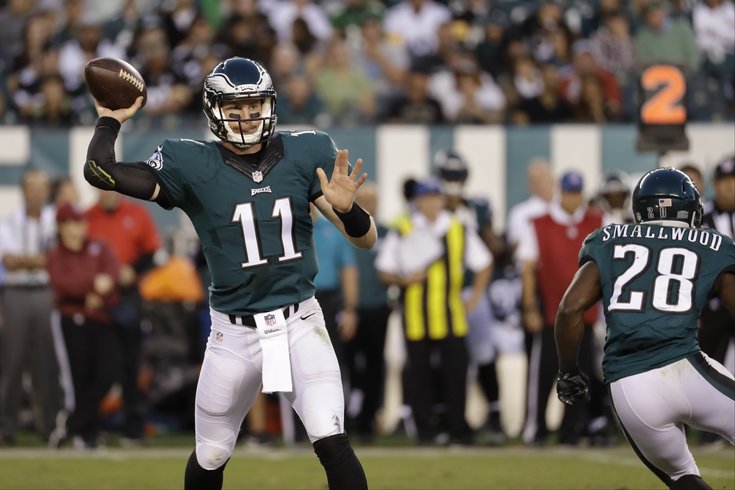 As Carson Wentz dazzles Philadelphia with his talent and his poise, it’s inevitable that we turn our attention to the many fools associated with this improbable story.

How do the Cleveland Browns feel right now? The Los Angeles Rams? All of the draft experts who favored Jared Goff? All of the snobs who maligned North Dakota State just because they aren't an FBS school? Bart Scott?

How could so many people be so wrong?

And – here’s the biggest twist of all – how could the Eagles be so right?

The best thing to happen in Philadelphia sports since the 2008 World Series parade is a 23-year-old quarterback who simply loves playing football. Imagine that. In his own eyes, Wentz is not the latest commodity in a billion-dollar industry. He’s just a kid playing a game.

And that’s how he has navigated the first three contests of his career, including an amazing 34-3 demolition of the Pittsburgh Steelers Sunday at Lincoln Financial Field. In what was supposed to be the truest test of his readiness in the NFL, Wentz finished with 301 passing yards, a 126 quarterback rating, and a slew of new admirers.

Conspicuous only by their silence were his many previous detractors.

Quarterback guru Hue Jackson, head coach of the Browns, was no longer publicly doubting Wentz’s adaptability to the NFL, Cleveland GM Paul DePodesta was no longer saying Wentz wouldn’t be a top-20 quarterback, and Scott, well, he’s finally shut up.

A former linebacker with the Jets and Ravens and now a CBS analyst, Scott actually said after the Eagles went 2-0 that support of Wentz was “fool’s gold,” and that the rookie would get his comeuppance against the Steelers. A blowhard by nature, Scott needs to get home fast. His village is missing its idiot.

The truth is, not even Wentz’s biggest detractor could deny the young quarterback’s potential after a play he pulled off with Darren Sproles in the third quarter on Sunday. Rookies simply do not make plays like that – ever.

The Eagles were already leading 13-3 when Wentz read a blitz to his left, rolled to the right, tiptoed near the line of scrimmage, spotted Sproles sprinting behind the coverage and flipped a perfect spiral into the running back’s hands, in stride. Sproles then snaked his way into the end zone for a 73-yard touchdown and the clinching score.

When I asked Doug Pederson about that play this morning on my WIP radio show, the Eagles coach – a former quarterback himself – couldn’t contain himself. He recited all of the decisions that went into the sequence and then marveled at the accuracy of the throw.

“That was amazing,” he said. “But we’ve seen it before in practice. He does it all the time.”

And now, after three turnover-free games in a row, there’s every reason to believe Wentz will be doing it for the next decade or so, right here in Philadelphia. That’s the part of the Carson Wentz story that has left Eagles fans in a state of shock. This time, despite the naysayers, the next great quarterback appears to be ours.

Hue Jackson was wrong about the kid. So was Paul DePodesta. All of those draft experts who preferred Jared Goff, including the team that took him with the top pick, the Rams, are being fitted for dunce caps right about now. And, thanks to Wentz, “fool’s gold” is a term used only by fools named Bart Scott.

The Carson Wentz era has officially begun in Philadelphia, promising our fans many more chances to cheer this amazing young quarterback, and to mock his ridiculous critics.

Philadelphia and Pittsburgh are major cities with a lot more in common than the same state. They are filled with working-class people who absolutely love football.

So why is there no NFL rivalry between these two proud places?

Gene Collier, a veteran football writer at the Pittsburgh Post-Gazette, posed that question on my WIP radio show last week, and in a recent column. He’s right. The buzz preceding yesterday’s Eagles-Steelers game did raise the issue of why these teams don’t play each other more often.

Of course, the sacred NFL schedule plan requires that NFC East and AFC North teams face each other every four years, but maybe it’s time to re-think that philosophy. Why can’t the NFL drop two useless preseason games and add one regular-season contest that features geographic rivals? Doesn’t that make sense?

Baseball has been doing it now for more than a decade, so why not the NFL? Every year, the Giants would play the Jets, the Ravens would face the Redskins and the Eagles and Steelers would stage an intrastate match-up. Before long, we would find new reasons to resent the Steelers (six Super Bowls), and them us (we’re a much bigger and better city.)

Even now, Philadelphia and Pittsburgh have some healthy disagreements. We love Wawa convenience stores; they prefer Sheetz. We are addicted to cheesesteaks, while they clog their arteries with a hideous concoction of meats, cole slaw, tomatoes and French fries called a Primanti Bros. sandwich. Yuck.

What better time to generate some new reasons for the rivalry?

The Steelers represent the old guard of the NFL, while the Eagles have suddenly become the young upstarts. Hey, Carson Wentz is already being called a clone of Ben Roethlisberger. They share agents and physiques. It’s perfect.

If the NFL is still not convinced that an annual Eagles-Steelers game would be good for the sport – and for the bottom line – consider the rivalry between the Flyers and Penguins. Every game is an event. Penguins fans loathe the physical style of our team. We hate the name Sidney.

Yesterday’s astonishing win by the Eagles was a great start to a whole new rivalry between the two biggest cities in Pennsylvania. Now we just need the NFL to realize that.

It’s a brand-new season with a brand-new team, but it’s the same old Joshua Harris. The Sixers owner did it again last Friday when he unveiled an $86-million state-of-the-art practice facility in Camden, N.J.

“Today is the culmination of years of research, design and construction to develop a training complex that stands as the best, we think, in all of professional sports," the billionaire crowed.

There’s only one problem with Harris’ incessant bragging.

From the day he took over five years ago, his team has been historically bad. His record as owner of the team is 116-278. That is the worst record in the NBA over that span – as was his club’s pitiful 10-72 mark last season.

Harris has done only two things since he bought the Sixers. He has blabbered on and on about what a first-class organization he created, even while dismissing a GM he described as “the best young mind in the game,” Sam Hinkie. And he has made money – lots of it – because owning an NBA franchise right now is idiot-proof.

I have always seen Harris as a snake-oil salesman because he is full of promises, with no actual payoff. Yes, the new facility is impressive, but he did it almost exclusively with New Jersey taxpayer money. He is quick with a platitude, but much less so when it comes to using his own money.

The bottom line on Joshua harris – and that’s really all that matters to him – is that he is much better at talking than he is at winning. And he knows it. Already, he’s got his PR machine tamping down expectations for the season, suggesting that 20-25 wins would be great progress this season.

With the best core of young players, the best revamped management team and the best new practice facility, the Sixers are going to have to do a lot better than that. Joshua Harris may have conned his way into a billion dollars as a businessman, but he’s working in a city now that knows BS when it hears it.

It’s time for Harris to stop talking, and to start winning.

• I’m a big Pete Mackanin fan, but the manager’s loyalty to closer Jeanmar Gomez bordered on the absurd last week, as the Phillies blew ninth-inning leads twice. Mackanin even admitted on my WIP radio show that he would prefer a “swing-and-miss” closer over Gomez next season. So why was slumping pitcher still closing late in September? It makes no sense.

• Bryan Colangelo admitted last week that he had no interest in working under Sam Hinkie, so he initially turned down the Sixers GM job last winter. Six weeks later, Colangelo accepted the offer when he was given total control over personnel. What happened during those six weeks? The best guess is, owner Joshua Harris finally figured out that Hinkie was a fraud.

• There are three sure things in life – death, taxes and the stupidity of the NCAA. Last week, the governing body of college sports ruled that Villanova’s top recruit, Omari Spellman, was ineligible this season on an obscure technicality. During this long process, the NCAA showed no concern for the young athlete. As usual, these clueless bureaucrats got it wrong.

• Because athletes are so compelling, it is unimaginable when one dies while still young. Miami’s amazing 24-year-old pitcher Jose Fernandez lost his life in a boating accident early on Sunday, denying himself the chance to reach his potential, and us the chance to witness it. We follow sports to escape the stresses of real life, but sometimes there is no escape. R.I.P, Jose. His talent and his spirit will be missed by all of us.