Breaking down the Eagles' 9 sacks of Carson Wentz, with gifs and stuff 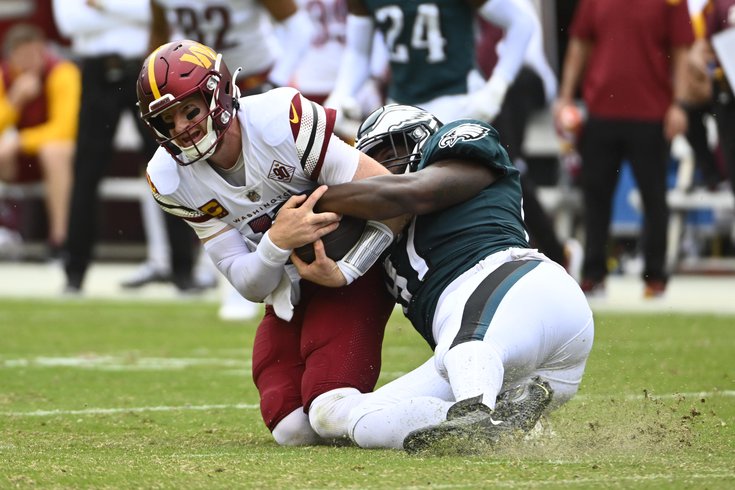 As you saw on Sunday, the Philadelphia Eagles beat the crap out Carson Wentz, sacking him nine times. Wentz has taken plenty of criticism for his role on those nine sacks, but it should be also noted that the Eagles' defensive line was also dominant.

Let's take a look at those nine sacks through the coaches' film, with a quick analysis thereafter of each sack. (You may have to click "Watch on YouTube" below to see them.)

• Sack 1: This is an impressive power rush by Josh Sweat. He gets LT Charles Leno off balance with a little shove by his outside arm. And then on the inside, Fletcher Cox pushes the pocket and helps Sweat clean up. Poor Sweat had to share this sack with Fletch.

• Sack 3: Javon Hargrave (3-tech) has a great get-off at the snap, and is able to get his head into the chest of LG Andrew Norwell on his inside rush, and it's game over for Norwell.

• Sack 4: Wentz holds onto the ball for an eternity, and Graham eventual gets there after a persistent rush. Haason Reddick is the beneficiary of Wentz's complete lack of object permanence.

• Sack 5: Hargrave dominates Norwell again, and gets Wentz off his spot. Graham cleans up with another motor sack. He gets the ball out and Hargrave recovers.

• Sack 6: Reddick has the right idea against Wentz. Just get your hand somewhere near Wentz's arm and he might self-force a fumble.

• Sack 7: Graham's first 1.5 sacks were of the hustle variety. This one was a clean win against Sam Cosmi. Graham gets Cosmi's hands down with good hand fighting, and he gets a good swat in on the football with his left hand but Wentz is able to hold on.

• Sack 8: Cosmi is a half tick slow getting out of his stance at the snap, and Sweat makes him pay. Wentz steps up and makes Sweat miss initially, but a good Patrick Johnson rush from the other side cuts off Wentz's running lane, and Sweat eventually gets home.

• Sack 9: You don't normally see the blitzing linebacker clearing out a lineman so that the DT can loop in behind him, but that's what happens here. T.J. Edwards times up this blitz nicely and takes the center with him, allowing Davis basically a free run at Wentz. Oh, and hey, there's the big man's athleticism. Davis misses Wentz, but Edwards is there to clean up.