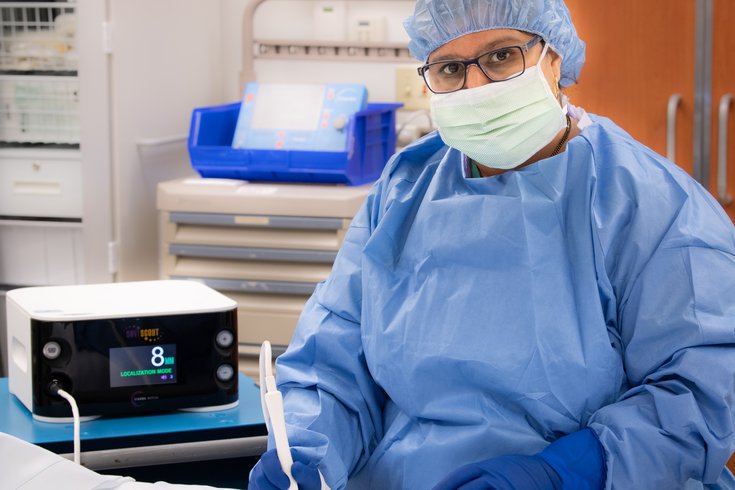 A breast cancer diagnosis can be very scary, but local oncologists want women to know that early detection and treatment advancements offer reasons to be hopeful.

Breast cancer is the second-most common cancer among women in the United States, but mortality rates are decreasing. About 42,000 women die from it each year, according to the Centers for Disease Control and Prevention. But death rates dropped 40% between 1989 and 2017.

For Breast Cancer Awareness Month, PhillyVoice reached out to three local experts to discuss the latest advancements in detection and treatment.

The experts told PhillyVoice that the first line of defense against breast cancer is to detect it as early as possible.

Breast self-exams, breast cancer screening tests and annual physical evaluations by a gynecologist or primary care doctor are the best way to keep tabs on any troubling changes in breast tissue, they said.

Breast cancer screenings, like mammograms, are recommended for women after age 45, but they are available to all women after 40. Kulkarni recommends women start them after 40 because symptoms sometimes don't surface until the cancer is more advanced.

Knowing their bodies well enough to spot any concerning changes on their own also is important, Miyamoto said. Most women experience perfectly normal changes in their breasts over time — pain, tenderness, even lumps — especially during menstruation and pregnancy.

But certain changes can be an early sign of breast cancer.

A lump in the breast or the armpit is the most common way breast cancer is detected, he said. Breast cancer is palpable. People can feel it about 40% of the time, and it is generally not painful.

Not all lumps are cancerous. "Eight out of 10 lumps you feel in your breast are going to be benign," Miyamoto said. "While this is reassuring, you shouldn’t ignore them."

Changes in skin texture – like a thickening, puckering or dimpling of the breast – also can be a sign of cancer.

A red and inflamed breast may mean inflammatory breast cancer, a rare but aggressive form. Yet, these symptoms are more often caused by mastitis, an infection that can occur during breastfeeding. It still requires care though, Miyamoto said.

Bloody discharge from the nipple is another potential sign of breast cancer, although it also is rare. Most often a noncancerous pituitary tumor called prolactinoma is to blame.

Breast pain generally isn't an early sign of breast cancer, but if women are experiencing a focal point of pain that isn't going away, they should get it checked out, Kulkarni added.

TO SELF-EXAM OR NOT?

In recent years, the effectiveness of breast self-exams has been called into question.

Some research has suggested that they lead to too many false positive diagnoses. In 2015, the American Cancer Society stopped recommending them as a part of breast cancer screening.

Self-exams aren't very sensitive and many women don't know what they are looking for, Kulkarni said. Still, she advocates for a combination of self-examination, mammograms and evaluations by a doctor as the best approach.

"After 30, women should be taught to self-exam," Kulkarni said. "You will learn what your breasts feel like. Know your own body. This is the purpose of self-exam."

To conduct a self-exam, women should stand in front of a mirror with their arms over their head. They should look to see if the nipple is retracted, inverted (pushed inward instead of sticking out) or if there is any dimpling of the skin. They should pay attention to any redness, soreness, rash or swelling in either breast.

They also should look for any signs of discharge coming out of one or both nipples. It could be watery, milky, a yellow fluid or blood.

Next, women should feel their breasts while lying down. Using just the pads of their fingers, they should create a circular motion as they examine the entire breast from top to bottom and side to side. Lubricating hands with lotion offers best results.

Miyamoto, who also advises his patients to do self-exams, said it is important to examine the entire breast – all the way up to the armpit. Called the "axillary tail of spence," breast tissue extends to the armpit.

Women shouldn't conduct a breast self-exam more than once a month and never during menstruation, he said.

For Miyamoto, an important part of early detection is also understanding the risk of developing breast cancer.  Women with the highest risk need to be more diligent about being screened regularly.

It may surprise you what can put women at risk. The list includes:

• Getting their first menses under the age of 12

• Not giving birth to a first child until after turning 30

• Starting menopause later, over the age of 55

• Having a first-degree relative with breast cancer

• Having a genetic predisposition to it – the most common cause of hereditary breast cancer is an inherited mutation in the BRCA1 or BRCA2 gene. Women with the gene mutation are five times more likely to develop breast cancer.

Being overweight and drinking alcohol also can increase risk, Miyamoto said. So can drinking more than one alcoholic beverage a day, and being on oral contraceptives for more than five years.

On the positive side, maintaining a healthy lifestyle, including regular exercise and not smoking, can decrease risk.

Brown added that women with dense breasts are also at slightly higher risk. "Mammograms tend to not be as clear so there may be the need for additional imaging, MRI or ultrasound," he said.

It is important to note that men can develop breast cancer too, although it is more rare. Diagnosis and treatment is the same, but men tend to get diagnosed later because they aren't aware of their risk.

The experts stressed that women should not be afraid to get evaluated if they see any worrying changes in their breasts. With advancements in diagnosis and treatment, the prognosis for breast cancer patients, even if the cancer has spread, is a lot more hopeful today.

The detection process, for one thing, has become more refined, they said. A 3D CAT scan called tomosynthesis allows the breast to be viewed from multiple angles and is better at identifying calcification in the breast, which can indicate cancer.

So has the treatment process.

Immunotherapy — medication that stimulates the patient's immune system to more effectively recognize and destroy cancer cells — is used to treat metastatic cancer right now, but in the next few years could be used to treat all breast cancer patients, Kulkarni said.

Oncologists also have a better understanding of the different genetic signatures of tumors, an advancement that has led to more individualized treatment plans for patients.

Once a tumor is biopsied, the surgeon can use the Oncotype DX Breast Recurrence Score Test to determine how much chemotherapy would be beneficial and if the cancer is likely to reoccur. The test is based on the 21 specific genes in breast tissue.

"A low occurrence score means we can give them less chemotherapy and they will do just as well," Brown said. "It is a big breakthrough in preventing overtreatment. Every tumor has genetic signature, and now we are able to analyze them.

"There have also been improvement in radiation in the last five years," he added. "It is more specific so it doesn't effect other organs and it is of shorter duration."

Surgical techniques are constantly evolving too. Breast conservation is now an option where the surgeon only removes the tumor and some of the surrounding tissue instead of the entire breast.

Kulkarni uses the SAVI SCOUT device to make the procedure less invasive. Traditionally, she explained, surgeons would have to insert a wire into the patient's breast to help guide them to the location of the tumor. The wire would stick out of the breast, causing discomfort and anxiety.

The SAVI SCOUT device is no larger than a grain of rice. It is inserted into the breast and then the surgeons use a handheld instrument to send a transmission to the device to help guide them to the tumor.

Inspira Health was the first provider in the region to offer this FDA-approved technology, Kulkarni said.

The way breast cancer is treated and diagnosed is constantly changing and patients should take comfort in that, the experts said. The earlier it is detected, the better the outcomes, so don't ignore any worrying symptoms and schedule those mammograms and gynecology checkups.