The forthcoming publication bearing the same name as the eight-episode audio series will be released Oct. 26 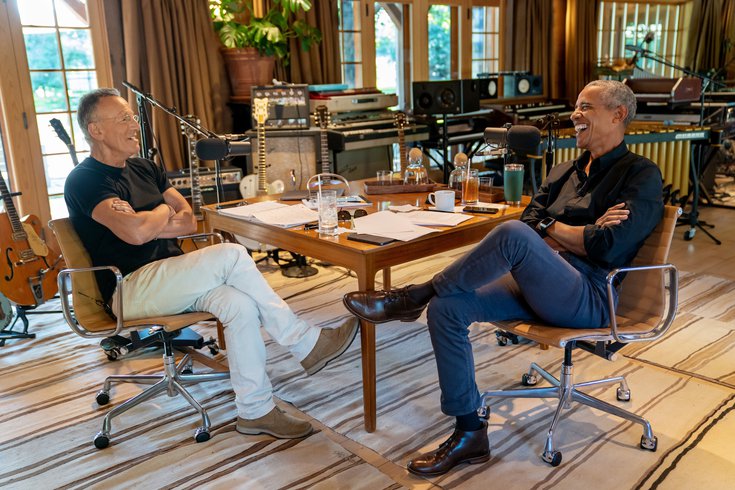 The forthcoming publication bearing the same title as the eight-episode audio series will be released to the public on Oct. 26.

"The conversations Bruce and I had in 2020 feel as urgent today as they did back then," Obama said. "They represent our ongoing effort to figure out how it is that we got here, and how we can tell a more unifying story that starts to close the gap between America’s ideals and its reality."

The book will feature more than 350 exclusive photographs from both men's personal collections, exclusive new material from their recording sessions and never-before-seen archival material, including Springsteen's handwritten lyrics and Obama's annotated speeches.

The publication will also feature conversations that the former president and musician had at Springsteen's Stone Hill Farm and home in Colts Neck, Monmouth County.

The podcast, which premiered in February, featured both men discussing a number of topics, including marriage and fatherhood, music, race and masculinity, the country's future and their most inspiring American heroes of all-time.

Both men also shared stories about their career-defining moments, their origins, the country's political climate and the "growing distance between the American Dream and the American reality."

"There were serious conversations about the fate of the country, the fortune of its citizens and the destructive, ugly, corrupt forces at play that would like to take it all down," Springsteen wrote for the book's introduction. "This is a time of vigilance when who we are is being seriously tested. Hard conversations about who we are and who we want to become can perhaps serve as a small guiding map for some of our fellow citizens ... This is a time for serious consideration of who we want to be and what kind of country we will leave our children. Will we let slip through our hands the best of us or will we turn united to face the fire? Within this book you won’t find the answers to those questions, but you will find a couple of seekers doing their best to get us to ask better questions."

The book is available for preorder now.

Springsteen and Obama have become good friends over the years. Two lifelong Democrats, they first met during a series of campaign performances Springsteen and the E Street Band did for Obama during the 2008 presidential race.

The former president awarded the singer/songwriter with the Presidential Medal of Freedom, the nation's highest civilian honor, in November 2016. The New Jersey native also played a private "thank you" show for Obama before the latter left office in 2017.

"Over the years, what we’ve found is that we’ve got a shared sensibility," Obama wrote in the book. "About work, about family and about America. In our own ways, Bruce and I have been on parallel journeys trying to understand this country that’s given us both so much. Trying to chronicle the stories of its people. Looking for a way to connect our own individual searches for meaning and truth and community with the larger story of America."

"Renegades: Born in the USA" could be the perfect birthday gift or an easy way to get a jumpstart on holiday shopping this year.