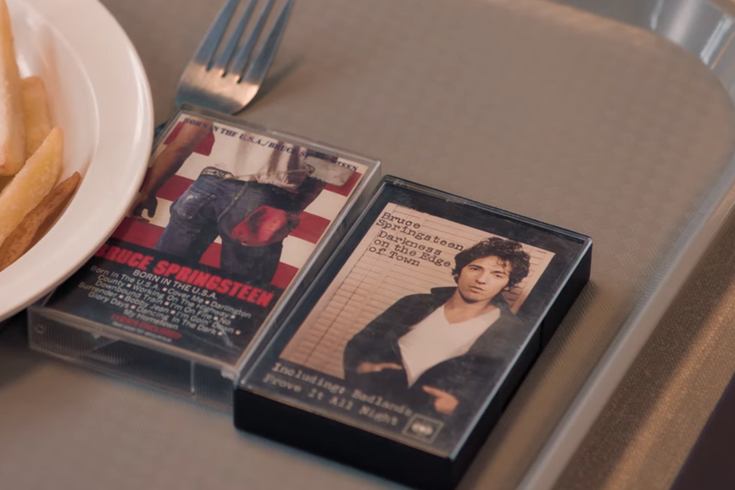 Two Bruce Springsteen cassettes are the main character's gateway to The Boss's catalog in the new movie 'Blinded by the Light.'

The first full-length trailer for “Blinded By The Light”, the feature film based on a book about a teenager's love for Very New Jersey Dude and rock n' roll legend Bruce Springsteen, has been released.

MORE CULTURE: Questlove on Kanye West's rise to fame: 'This is it for me'

At first glance, the film — set in 1987-era Britain and directed by Gurinder Chadha — seems to be a pretty classic coming-of-age, kid-against-the-parents flick. It will feature Springsteen music, the desire to get out while we’re young, and lots of denim.

You can watch the full trailer here:

The trailer goes 45 seconds without bringing in The Boss, but when he finally arrives, the editors cut straight to the top of his songbook: We get “Dancing in the Dark”, “The Promised Land”, and “Born to Run” in quick succession.

We also see the album jacket for “The River” in the main character’s room, but there’s no mention of anything from his seminal “Nebraska”, which came out nearly two years before “Dancing in the Dark.” The album is a bit dark for what looks like a breezy film, but maybe there will be a brooding solo scene in a bedroom where the main character listens to “Reason to Believe.” Who knows?

Here’s what we do know: A previously-unreleased Springsteen song will appear in the film. “I’ll Stand by You Always,” a song he wrote at the turn of the century for his eldest son and which he offered up for the first “Harry Potter” film.

It’s lining up to be a big 2019 for Springsteen fans: The 69-year-old Long Branch native announced “Western Stars”, which will be his 19th studio album, last month.

"Blinded by the Light" is set to premiere Aug. 14.