Harper is in the second season of a 13-year, $330 million deal with the Phillies 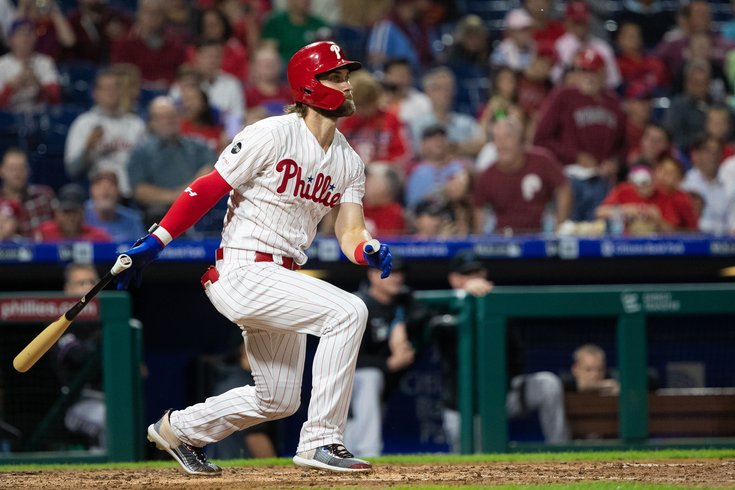 Bryce Harper and the Philadelphia Phillies will look to turn the page in 2020's shortened 60-game season, potentially giving the city its first playoff baseball since 2011.

Philadelphia Phillies right fielder Bryce Harper arrived in Clearwater, Florida for Spring Training on Sunday ahead of the 2020 season, his second in Philadelphia since signing a 13-year, $330 million deal last offseason.

The 27-year-old Harper, who was not selected as an All-Star for the first time in five years last season, took a number of questions from the media on Sunday morning, one of which touched on the Phillies potentially trading for Chicago Cubs’ All-Star third baseman Kris Bryant.

The Cubs appear to be actively shopping the 28-year-old Bryant, and the Phillies have been seen as a natural fit for the 2016 National League MVP to insert at third base and into the heart of their lineup. While reports initially indicated that the Phillies were interested in acquiring Bryant, it looks like a deal between Philadelphia and Chicago has become unlikely.

Bryant isn’t slated to become a free agent until after the 2021 season, but his $18.6 million salary would push the Phillies over the luxury tax line at $208 million. A trade for Bryant would all but require the Phillies to part ways with their two best prospects, pitcher Spencer Howard and third baseman Alec Bohm, as well as would complicate their plans to extend All-Star catcher J.T. Realmuto long-term and improve the pitching staff.

However, the Phillies would get financial relief when the likes of Jake Arrieta, Didi Gregorious, Jay Bruce, David Robertson, and others come off the books at the end of the 2020 season.

The friendship between fellow Las Vegas natives Harper and Bryant is no secret to baseball fans, but Harper acknowledged the unlikeliness of a trade for Bryant and the hurdles facing Philadelphia if it were to deal for him.

“Any time you're able to add an All-Star player you're going to want to add an All-Star player,” Harper said to reporters on Sunday. “But you have to be able to know that you developed a player in the minor leagues that can also help you at third base, and Alec Bohm could be that guy for us. He could come up and be one of the best third basemen in the second half or whatever it is. As a team, you have to have guys like that, that are only making the minimum so you can go and spend at the deadline.”

“If the Cubs aren't where they are, you never know at the half what they're going to be doing,” Harper continued. “Bryant could be cheaper at that point. But I can't give up Spencer Howard and Bohm, and possibly give up our whole future, for a year and a half of KB if we don't sign him to an extension. And I know there’s a guy in there that we need to sign to an extension. I think having a guy like J.T. Realmuto for the next six years would help us.”

Unless the Phillies decide to part ways with Bohm and Howard in a deal for Bryant, Philadelphia will likely start Scott Kingery and Jean Segura at third base to begin the season until Bohm is ready to be called up from the minor leagues. Segura will shift from shortstop after the signing of Gregorious this offseason, while Kingery has established himself as the Phillies' ultra-utility man.

While the offseason was Harper’s first as a father after the birth of his son Krew last summer, it couldn’t have been the easiest to see his former team, the Washington Nationals, win the World Series in the first year after he departed D.C.

But he admitted that he watched the World Series and was happy for his former teammates.

“Yeah, I watched. I watched through the whole series," Harper said. "And I never have before."