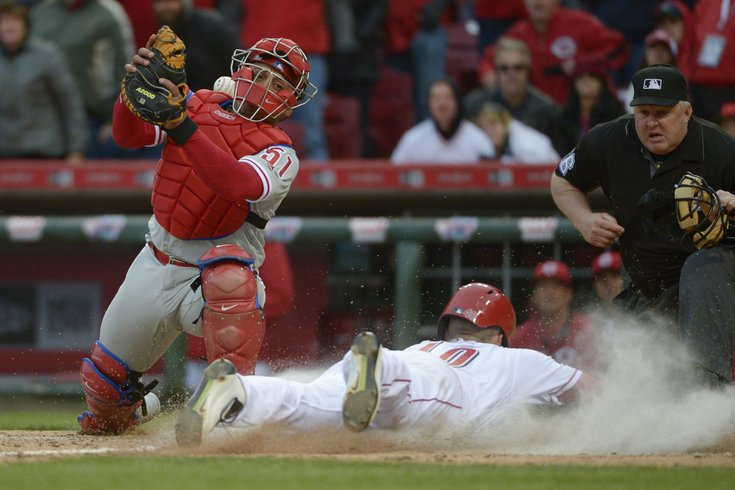 CINCINNATI – On Sunday, a day after the Phillies arrived in town and on the eve of the season opener, manager Pete Mackanin and pitching coach Bob McClure gathered seven of their players in a room at the downtown Westin.

The seven pitchers were the ones deemed worthy to begin the season in the uncertain Phillies bullpen. Mackanin’s message to his relievers: Don’t screw this up.

What Mackanin and McClure did want to tell their relief corps was to remain patient and to pitch to the best of their abilities even if few (if any) roles have been defined in the ‘pen with the season nearly underway.

“We’re very well aware that pitchers always want to know their role, it seems to be what they always are concerned with, so they know when to get up, when not to,” Mackanin said prior to Monday’s season opener at Great American Ball Park. “I know last year I was told every time the phone would ring we’d have several guys cringing and hiding. They didn’t know who was going to come into the game.”

After Day 1 of the 2016 season, the only people that will likely be “cringing and hiding” are the brave fans who stay tuned into Phillies game this year after the starting pitcher exits.

After a brilliant debut by Jeremy Hellickson and a two-run home from Freddy Galvis had the Phillies up by a run with nine outs to go, pricy veteran reliever David Hernandez couldn’t retire a hitter in the eighth inning as the bullpen came crumbling down in a 6-2 loss to the Cincinnati Reds on Opening Day.

“It was embarrassing,” a dejected Hernandez said at his locker stall after the game.

All three of the base runners Hernandez put on base – on two walks and a double – came around to score when James Russell entered and gave up a sacrifice fly, a walk, and a two-run single to the first three batters he faced.

“We've got to be better than that,” said the veteran left-hander Russell, signed to a minor league contract in November. “It's still early. It's one game. It's unfortunate, but it happens. It's tough just watching Helly, what he did today. He grinded out a good one and then for us to just kind of piss it away a little bit, it stings.”

Hellickson put the Phillies in position to win.

He allowed one unearned run in six innings, holding the Reds to three hits. He struck out six and didn’t walk a batter. But his day was declared over after 79 pitches.

Why not let him pitch into the seventh and beyond?

“It sucks,” Hernandez said. “But it’s a long season. I have to be ready and take the ball the next time my name is called.”

“It’s his first outing and he pitched very well,” Mackanin said. “We thought about letting him back out there. But you bring in (Jeanmar) Gomez and he does his job. We figured we have got to try to find the formula for winning games when the pitcher can’t go into the seventh or eighth.”

Here’s a silver lining from the ‘pen: not every reliever that entered the game on Monday immediately blew up on the mound.

So, with such uncertainty in the bullpen, particularly in the backend, why not let a reliever go another inning if he’s efficient and effective, as Gomez was on Monday?

“Well, you’ve got to be careful with that, too, because then you’re using pitchers more than you want to use them,” Mackanin said. “And as you go later into the season you start leaning on that and now you’re overworking them. You need that eighth and ninth inning guy.”

The Phillies expect David Hernandez to be one of those guys. They traded away two late-inning relievers last summer, Jonathan Papelbon and Jake Diekman, and were set to deal another, Ken Giles, when they signed Hernandez in December.

Hernandez entered spring training two months ago as the early favorite for the closer’s job vacated by Giles. He was signed to a one-year, $3.9 million contract this winter – the only major league free agent deal the Phillies made this offseason.

As encouraging as Hellickson’s Phillies debut was, Hernandez’s own first game with the team was more than a little troubling, especially coming off a spring that saw him sidelined for two weeks with triceps tendinitis.

All three runners eventually came around to score in an inning highlighted by a two-run, go-ahead single from Joey Votto (off Russell) and a two-run single by Jay Bruce (off right-hander Hector Neris).

And so the Phillies, 60-72-2 all-time on Opening Day, dropped the first of what’s likely to be many losses this season because they could not hold a slim lead late.

“It sucks,” Hernandez said. “But it’s a long season. I have to be ready and take the ball the next time my name is called.”

If you decided to pull a Ferris Bueller as many do on Opening Day, calling in sick from school or skipping out of work early to get you fix of the first taste of baseball in 2016, you probably lost your appetite right around dinner time on Monday night.

Any optimism you managed to generate over the winter, during an offseason that saw the Phils rebuild move into high gear, with a new general manager and another trade to fatten the farm system, was destroyed in a half inning that brought the ugly reality of the current state of the Phillies back to the forefront of the baseball section of your brain.

The Phillies are still in a rebuild and might have some promise in the prospects developing in Lehigh Valley and Reading and beyond, but the major league bullpen is not going to be very good or very dependable in 2016. It’s the weakest link of a team that’s expected to flirt with 100 losses for the second straight summer.

It was on display for an ugly half hour in Cincinnati. And it wasn’t unexpected, either.

“I look at it like we have work to do, some searching to do,” Mackanin said of how Game 1 of 162 can often be viewed as a tone setter for a season. “We have to come up with the right combination. I’m not going to let it set the tone for the season, although we all know that’s where we might have a little weakness. We’re off tomorrow and then we play another game. We’ll go from there, game to game.”