Locations in Florida, New York and California are also testing demand of Beyond Burger 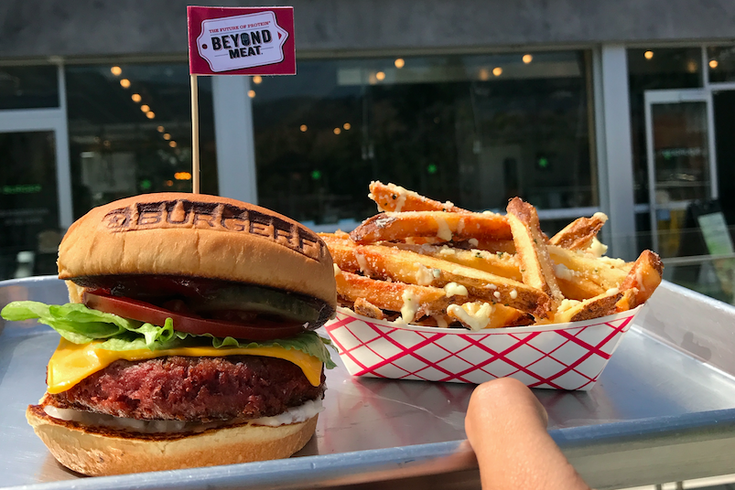 Starting Monday, Beyond Meat's plant-based Beyond Burger came to eight BurgerFi locations, including one in Philly.

A national burger chain added a plant-based option to its menu this week in Philadelphia and several other test markets.

Starting Monday, BurgerFi introduced the Beyond Burger to its restaurants, making it the first national chain to add the meat-free product to its arsenal.

The Beyond Burger is a vegan patty sold in certain grocery stores that contains pulverized beets and "bleeds" beet juice when cooked. But it "looks, cooks, and satisfies" like meat, according to its processor, Beyond Meat.

BurgerFi rolled out the plant-based option at its Center City location on 12th and Arch streets, as well as restaurants in New York, Florida and California. By the end, it plans to offer the vegan burger at all of its locations, according to a statement from Beyond Meat.

With more than 100 shops around the country, BurgerFi markets its food as made from scratch with "all-natural" ingredients.

The restaurant, which already offers a quinoa-based veggie burger, plans to sell the Beyond Burger for $8 to $9, according to a New York Times report.

“Our VeggieFi burger is really popular, but there’s a real difference between a vegetable burger and this plant-based burger, because it truly tastes like burger,” Paul Griffin, the executive chef at BurgerFi, said in the report. “When you eat it, your mind tells you you’re eating beef.”

Beyond Meat, which bills itself as a trendsetter in the "better-burger arena" and is reportedly backed by Bill Gates and other noteworthy investors, said customers at the chain can choose to have their vegan burger served with the traditional onions, pickles, lettuce, tomatoes and cheese. But they can also have it wrapped vegan-green-style in lettuce or served on a vegan bun.

The company expressed its excitement to introduce "the future of protein" to a mainstream eatery.

The Beyond Burger was introduced last year to Whole Foods, and it expanded in May to hundreds of Safeway locations in California, Hawaii and Nevada.