On July 24, the privateer will dock in the beach town and enlist children between the ages of 3 and 10 to help him dig up his legendary stash of secret booty 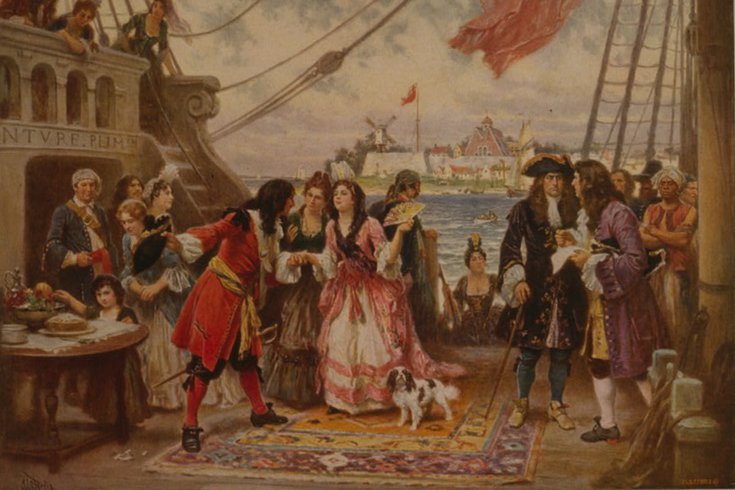 Kids in Cape May will get a chance to help the infamous Captain William Kidd dig up his secret stash booty at the 58th annual treasure hunt on Saturday, July 24 at 1 p.m. This image is a painting of Kidd's ship published in 1932.

Kids in Cape May will get a chance to help the infamous pirate Captain William Kidd dig up his secret stash of stolen booty later this month.

The swashbuckler plans to dock in the shore town on Sunday, July 24 for the city's 58th Annual Captain Kidd Treasure Hunt – a free event for kids between the ages of 3 and 10.

Treasure seekers should meet the captain at 1 p.m. on the promenade in front of the Cape May Convention Center at 714 Beach Ave.

They'll get a free pirate hat and the chance to help the captain dig for his long-lost treasure, which legend says was buried somewhere along the Jersey Shore before he was executed in 1701.

The kids will be divided into three different digging areas based on their age. Adults are only allowed to stand back and watch.

No metal shovels are allowed. Each child will be entitled to their very own treasure chest. They will have to leave the digging area after they find one.

Kidd was born in Scotland around 1645 but immigrated to New York City as a young man and became a wealthy, well-connected colonist.

Around 1695, he received a privateer's license from the British crown after he failed to get a position in the Royal Navy. A privateer was essentially a pirate authorized by a government to attack and capture enemy vessels.

Kidd was supposed to seize French ships and other pirate vessels and had to split his loot with the crown and investors who had supported his venture.

The captain tried to stick to this privateering mission, but his crew mutinied in 1697 after they got sick of letting treasure-laden ships of other nationalities sail away.

Kidd ended the mutiny when he killed one of his crewmembers by whacking him in the head with a bucket, but the incident inspired him to renege on his agreement with the British.

He and his crew raided an Indian ship laden with silk, guns, spices and gold and headed for the Caribbean. When they arrived, Kidd found out he had been dubbed a pirate and was wanted by the British crown.

From there, the crew sailed to Boston, where Kidd hoped his political connections would be able to resolve the situation. The boat made multiple stops in what's now New Jersey along the way.

He was arrested in Boston and sent to London to be executed, but legend says he buried some of his spoils along the Jersey Shore.

One stash of his treasure was dug up on Gardiner's Island, a small piece of land off the coast of Long Island, shortly after he was arrested.

But at his trial, Kidd insisted there was more. He promised to hand it over to the crown if they spared his life and issued him a ship to go get it.

It's not known if he was being truthful, but Kidd's claims have led generations of treasure hunters to search for his hidden booty up and down the Jersey Shore.

If the treasure is real, there's a relatively high chance it's in Cape May since pirates often stopped there to retrieve fresh water.

Some other possible locations of the treasure are the mouth of the Toms River and Sandy Hook, but the most famous spot is Cliffwood Beach, where 17th Spanish gold coins were once found on a small island that's since been subsumed by the Atlantic Ocean.