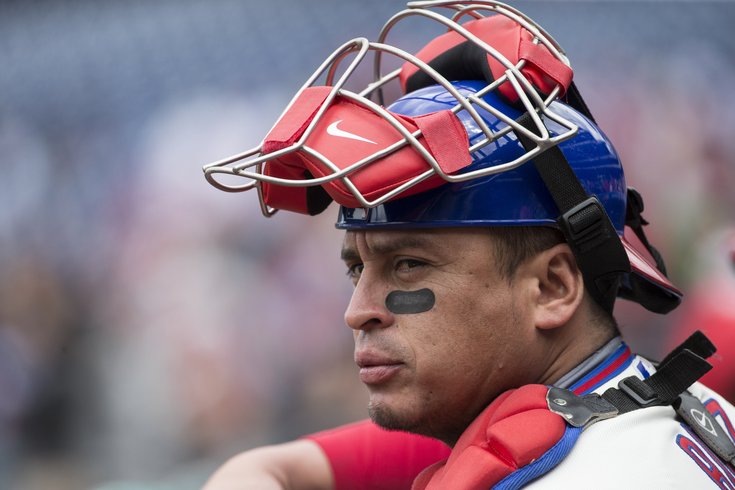 Philadelphia Phillies catcher Carlos Ruiz looks on during a Phillies game earlier this season. There's a decent possibility the lifelong Phillie is playing in his final home games at Citizens Bank Park this week.

Carlos Ruiz wasn’t in the lineup on Tuesday night at Citizens Bank Park against the Miami Marlins. The long-time Phillies catcher has started just one of the five games the team has played since returning from the All-Star break.

There stands a decent chance Ruiz will be back behind the plate on Wednesday or Thursday. The series finale against the Marlins on Thursday night is the best bet, since Ruiz has caught seven of Jerad Eickhoff’s last eight starts.

It could also be the final time Ruiz ever suits up in the red-pinstriped uniform he first put on more than 10 years ago.

Following the Phillies series with Miami, the team embarks on a three-city, 10-game road trip that takes the schedule through July 31. The Phils don’t play another home game until August 2, a day after Major League Baseball’s trade deadline.

“It’d be tough … it’s hard to think about right now,” Ruiz said on Tuesday afternoon. “Because when we go on the road a lot of things can happen. But I’m ready. I’m preparing myself.”

The 37-year-old Ruiz saw Cole Hamels and Chase Utley, two pillars of the organization and long-time teammates, traded away last summer. Ruiz and Ryan Howard are the only two players that remain from the 2008 World Championship team.

Like Hamels and Utley prior to those trades, both Ruiz and Howard began their careers with the Phillies and haven’t played anywhere else.

But the reality that Ruiz could be playing elsewhere before next month is beginning to set in. Ruiz spoke with his family about it over the All-Star break. He’s a free agent at the end of the year and has sat on the bench in place of Cameron Rupp in 31 of the Phillies last 44 games.

Ruiz has actually handled himself well at the plate during that limited playing time, hitting .275 with a .442 OBP in those 13 starts since May 30. But he’s aware of the direction of the organization, the importance of the front office seeing what Rupp can do on a regular basis.

“I understand that this team is rebuilding, they’re giving young guys a chance,” Ruiz said. “They’re really happy with the way Rupp is playing. But I feel great, I feel good at the plate. We’ll see what happens at the end of the month.”

Ruiz obviously wouldn’t fetch a huge return in a trade. But like Utley before him, he could certainly have value to a contending team seeking depth.

Being a trustworthy catcher is certainly a bonus to his value, too.

MLBNetwork’s Jon Morosi cited the latter as a reason Ruiz could be an intriguing fit for the pitching-rich Cleveland Indians. Cleveland starting catcher Yan Gomes was placed on the disabled list on Monday with a right shoulder injury and is expected to be sidelined for 6-to-8 weeks.

With a fairly productive offense – only five MLB teams have scored more runs – the Indians may be content with a veteran with experience handling a formidable staff. Any offense Ruiz could provide would be a bonus, although the Indians also have nowhere to go but up in that department: their catchers entered play Tuesday with an MLB-worst .168 average and .513 OPS.

The Dodgers, Pirates, Mets and Blue Jays have also received poor offensive production from their catchers and could at the very least seek depth at the position in preparation for a postseason run.

“I feel like when I’ve played more, I’ve felt good,” Ruiz said. “I can still do some things with the opportunity to play a little more. But I also respect the decision (the Phillies) have made. But I feel really good. And when they need me I’ll be ready. I always come to the ballpark ready to play, prepared.”

Ruiz’s professionalism and preparation could pay off in an opportunity with a new team in a pennant race in the season’s final two months. Last week, Ruiz acquired a full no-trade clause when he reached 10 full years of big league service time (all with the Phillies, and thus, 10-5 rights).

But that won’t stand in the way if he has an opportunity to play in the postseason for the first time in five years.

“I can still play, I can still call games,” said Ruiz, perhaps the most popular teammate throughout his 10-year run in an ever-changing Phillies clubhouse. “And I’d definitely like to go back to the playoffs, that’s my goal. I’m hoping that would happen here, but if not, with somebody else. … It’d be tough (leaving). Who knows. But I would be happy to go to a team that’s contending, going to the playoffs.”

Ruiz, who has just over $3 million remaining on his 2016 salary, will almost certainly be a free agent this winter. His contract gives his team the choice of picking up a $4.5 million club option for 2017 or paying out a $500,000 buyout.