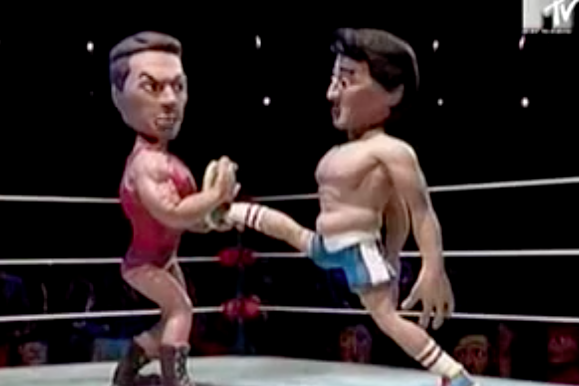 Claymated versions of Arnold Schwarzenegger and Sylvester Stallone duke it out on "Celebrity Deathmatch."

According to the Hollywood Reporter, the claymation comedy show "Celebrity Deathmatch" will make its return to MTV2. The news was confirmed in a tweet by the network:

The show's original creator Eric Fogel will be behind the reboot. It will reportedly follow the same structure of the original show: Animated versions of celebrities are pitted against each other in the ring for gruesome fights that end in the loser being brutally murdered. However, it will be altered slightly to suit the current entertainment environment dominated by social media.

Specifically, the show will feature hourly twitter wars. Also, MTV2 is taking suggestions from fans on twitter that use the hashtag #CelebrityDeathMatch2015 for potential match ups for the new run.

"Celebrity Deathmatch" would often mock celebrities in the limelight at the time, using whatever news currently surrounding the stars involved to parody them. The original run of the show aired for four seasons on MTV from 1998 to 2002, and was revived for two seasons on sister channel MTV2 from 2006 to 2007. Details on the show's production schedule and anticipated release have not yet been made public.

Which star from the region will appear on the renewed version of the show first? Prediction: Kevin Hart.