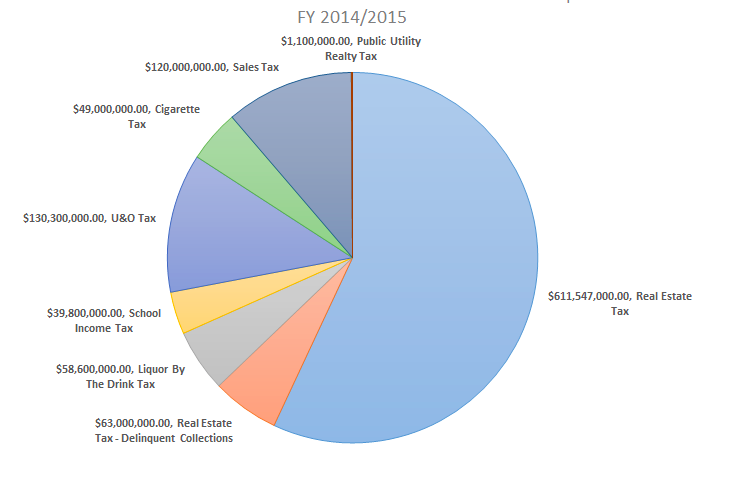 Few would deny there's a necessity to ensure enough funding to improve education in Philadelphia. It's hard to boil the value of learning down to dollars and cents, but from a public standpoint, Philadelphians collectively pay more than $1 billion in taxes to fund the Philadelphia School District.

The pie chart above breaks down the various sources of that local tax revenue. As expected, real estate taxes top the list, accounting for more than half of all revenue at $611,547,000.

The chart, referenced by Philadelinquency, actually draws attention to sections of the city such as Kensington and Somerset where a property auction last Friday wound up in the transfer of 89 properties from the city to private investors, valued at $2 million total.

Not withstanding the idiocy of anti-gentrification activism for one moment… the logic is simply this: Real Estate Tax is one of the more successful ways to pay for schools. We must have private market development in order to grow the tax rolls because that has proven to work to get income for the school...

We have far too much property not on the tax rolls at all because it’s either government or agency-owned property, then there’s underperforming property which is land that’s not paying what it should, even still… far too much of the City simply has really low property value. Can’t collect blood from a turnip.

What ultimately happens with the properties remains to be seen, but education funding has increasingly become a priority for local and state politicians. The ability to generate more revenue by restoring underperforming properties would go a long way, assuming it can be done without negating the views of residents. It would certainly help Governor Wolf defend his budget, which includes at least $159 million for education in Philadelphia.