For Chase Petty, Lonnie White, Jr. and Anthony Solometo, the wait is over. Now it's time to decide what comes next. 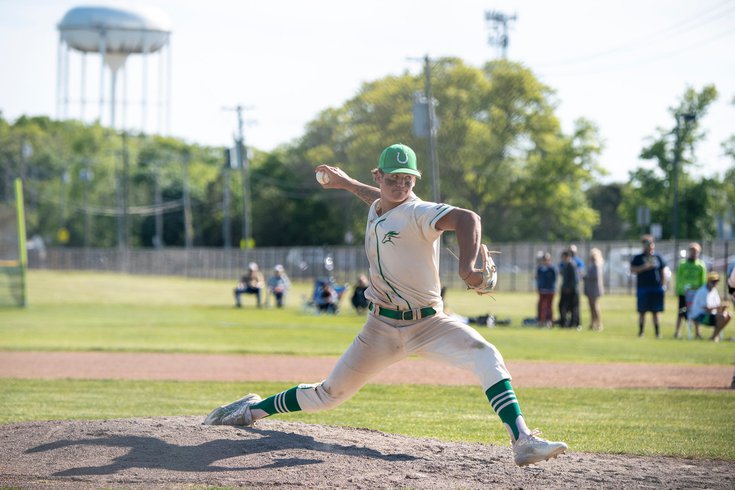 Mainland pitcher Chase Petty was taken by the Twins in the first round of the 2021 MLB Draft.

They each sat there impatiently, Chase Petty in Denver’s Bellco Theatre on Sunday night, and Anthony Solometo and Lonnie White Jr. on Monday morning in their homes. They each got their calls, in due time, in the 2021 Major League Baseball First-Year Player Draft.

The waiting was the hard par. Now comes the easy part — choosing what to do.

Petty, the 6-foot-2, 190-pound right-handed pitcher out of Mainland Regional High School who’s been clocked at 102 mph, is a University of Florida commit. During his senior season, he struck out 99 batters in 48 2/3 innings, while posting a 1.48 ERA. The Twins have a $2.65 million bonus for that draft slot.

White, the 6-foot-3, 212-pound Malvern Prep outfielder who hit .395 with 11 doubles, five home runs and 25 RBIs as a senior, falls under the draft value of $1.05 million for the Pirates, and is a Penn State commit for football.

Finally, Solometo, the 6-foot-5, 220-pound Bishop Eustace left-handed pitcher and North Carolina commit who went 5-0 this past season, had 64 strikeouts with just five walks in 32 2/3 innings and posted an amazing 0.21 ERA, falls under the Pirates’ bonus value of $2 million.

About three minutes before he was actually taken No. 26 overall by the Twins, Petty had an inkling he would go there. Much of where a player goes in the MLB Draft depends as much on signability as it does talent. For example, there were 20 players that were rated below Solometo, who was MLB’s No. 17th ranked player overall, taken in the first round.

“It’s great to hear your name called,” said Petty, who stole the show Sunday night with his Patrick Mahomes’ hairdo amid the round of boos MLB commissioner Rob Manfred received from the crowd at the MLB’s Draft headquarters. “I didn’t hear too much from the Twins, but they gave me an offer and we talked, so I knew three or four minutes beforehand that that they would pick me.

“I can’t say whether or not I’ll be going to Florida, but my dreams are coming true. Plus, I had to look good, I had to get the [mo]hawk going. I’m a very open guy and I wanted to enjoy the moment. It’s been emotional for weeks now and I expected my parents to get emotional. It hasn’t sunk in yet. The dream is to pitch in the majors.”

Upon being picked by the Pirates, White received a congratulatory message from Penn State head football coach James Franklin.

When White’s advisors informed him that the Pirates picked him, he was sitting with his family as the call came in.

“I was very nervous, my heart was pounding, but it was very exciting,” White said. “It was definitely nerve-wracking, because it’s something that I wanted to do since I was a little kid. I don’t know what I want to do just yet. I definitely feel more relaxed. The days leading to the draft I was stressing and very anxious to see what happened.

“The stress has gone away a little. I haven’t even answered my text messages yet. It’s hundreds and it’s really nice, because it’s not just my family. I heard from Penn State and they congratulated me and we’re going to keep them in the loop (with his next move). I’m pretty happy.”

Solometo thought he should have gone in the first round—and he should have. Though waiting another day didn’t bother him too much.

What the wait did was stir even more motivation to succeed, much like the way future Hall of Famer Tom Brady still grasps being taken in the sixth round.

RELATED: Three for the show: Trio of local high school baseball players could go in first round of MLB Draft