Chelten Hills Drive was closed off this week, but neighbors didn't listen. 'Does anyone see the problem here?" the township asked 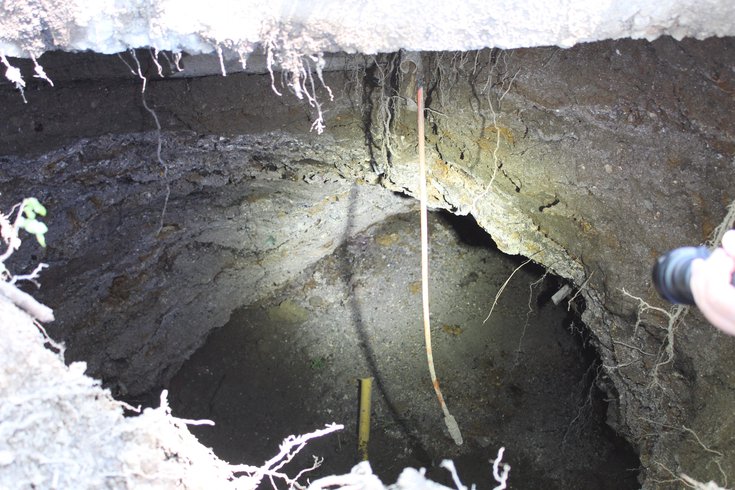 A massive sinkhole opened up in Cheltenham Township along Chelten Hills Drive this week. In a series of social media posts, the township expressed frustration with residents who have ignored the road closure, driving and walking dangerously close to the sinkhole.

Cheltenham Township officials are pleading with residents of the Montgomery County community to stay away from a gigantic sinkhole and to abide by road closures that have been put in effect while the situation is addressed.

The sinkhole emerged along Chelten Hills Drive between Church Road and Rodgers Road, creating concerns about the stability of the roadway and the possibility of a gas leak. Last Sunday, Cheltenham Township Emergency Management posted a notice for an emergency closure of the stretch due to the sinkhole.

Due to a sizable #sinkhole, Chelten Hills Dr is closed to vehicles and pedestrians between Church Rd and Rodgers Rd until further notice. pic.twitter.com/c94zhFoGZo

But by Monday, the township observed that lawbreaking motorists were simply going around the barricades. In frustration, emergency management shared a Facebook post reminding residents to respect the closure. The post noted that several township employees were almost hit by cars that disregarded the barriers.

Friends - yesterday we posted a note that there was an emergency road closure of Chelten Hills Drive, due to a...

Posted by Cheltenham Township Emergency Management on Monday, May 9, 2022

On Tuesday, the township erected a fence around the sinkhole and posted more signage about the closure. The fire department was brought in to test the area for a gas leak. A firefighter was tied with a rope to approach the sinkhole and safely lower a gas meter inside. It was determined that there was no leaking gas.

As the Township addresses the sinkhole, Public Works and Emergency Management personnel have erected a fence around it and posted signage saying the area is closed. The road is closed to vehicular and pedestrian traffic. Please respect the closures. pic.twitter.com/64T7Wk4U66

Still, the warnings and barriers couldn't keep residents away from the sinkhole.

In another Facebook post on Tuesday, Cheltenham Township Emergency Management chided residents for walking up to the sinkhole and inspecting it with flashlights.

"Last night we received a call, 'People are standing on / near the hole with flashlights. They are looking down the hole.' Does anyone see the problem here?" the township said. "We are assuming they missed all the big signs, the barricades, the Jersey Barriers, and the 'sidewalk closed signs.' So, in case you missed the moral of our story, STAY AWAY FROM THE SINK HOLE, it's dangerous and there is nothing to see."

Good Morning Cheltenham - Today we have a special story for everyone. As you are aware there is a sinkhole on Chelten...

Posted by Cheltenham Township Emergency Management on Wednesday, May 11, 2022

Chelten Hills Drive will be closed between Church Road and Rodgers Road until further notice, the township said. A message left with Cheltenham's township manager on Friday morning was not immediately returned.

The sinkhole problem comes in the context of an ongoing battle between some Cheltenham residents and the township over a proposed development about a mile south, at 222 Church Road in Elkins Park. A New York developer is pursuing a by-right project that would extend a road to create a cul-de-sac with eight single family homes.

The area of the proposed development, situated along a flood prone area of the Tookany Creek, prompted the formation of the Save 222 Church group to oppose the project. The township has worked through feasibility studies and plans for environmental mitigation measures that would accompany the development, but opponents believe it has gone unchecked because the property is private land and Cheltenham does not want to incur legal costs to fight a by-right construction project.

It's unclear how long it will take to close the Chelten Hills Drive sinkhole or how along residents in the immediate area will be impacted by the associated road closure.