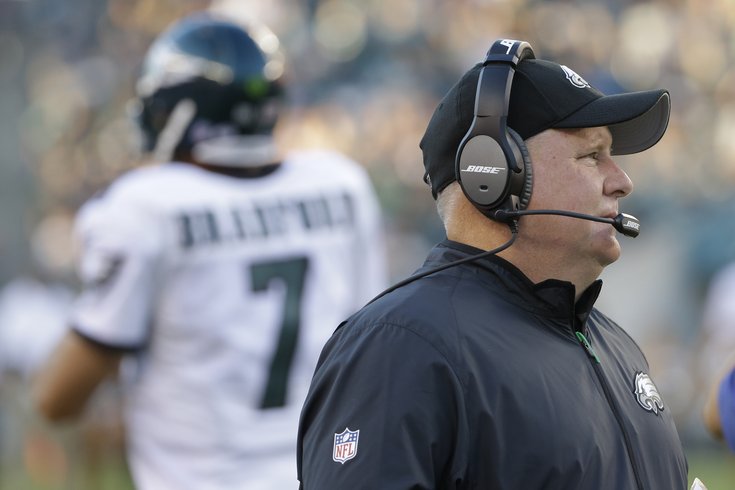 Chip Kelly is a smart guy. Even if you're not willing to go that far -- I can't entirely blame you after the way this season has unfolded through the first four games -- it's safe to say that, at the very least, he's not a total idiot.

One does not typically make it this far -- to the top level, that is -- in any given profession without at least a few brain cells. You also don't make it this far without a little ego. And with the ego, also comes stubbornness.

As recently as two months ago, Kelly was hailed as "a mad scientist" after a flurry of offseason moves and a 3-0 start to the preseason in which everything, especially on offense, seemed to be clicking. Now, a quarter of the way through his third season with the Eagles, and his first with control over personnel, it appears as though the coach has proven the "mad" part of that offseason moniker correct.

Like something out of Dr. Jekyll and Mr. Hyde, head coach Chip Kelly is at war with general manager Chip Kelly.

Nothing seems to be working, and it appears the coach has regressed. Why exactly that's happened remains somewhat of a mystery. But if we take what we know about Kelly, coupled with the things he's said during his sessions with the media, and apply it to this season specifically, you begin to see how occupying both those roles presents a problem for the former Oregon coach.

The players must be skilled enough ... because they're his players, and he hand-picked most of them.

The offense isn't the problem ... because it's his scheme, and he's seen it work before.

So Kelly has made it clear that he will continue to run the same offense, with the same players, and the problems will (eventually?) correct themselves. Another, somewhat smarter man than I -- or Kelly, for that matter -- had a term for that kind of thinking: 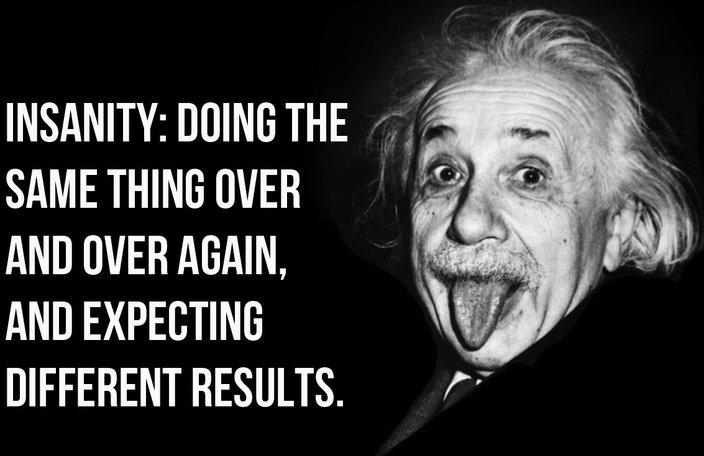 Coach Kelly is steadfast in the scheme he chooses to run. That's not changing anytime soon. He believes that if the players on the roster can better execute on the field, all the problems that plague the Eagles will go away.

"We need to execute the plays better," the coach said Monday, a day after his team fell to 1-3 on the season thanks to a 23-20 loss to the Redskins. "That's what we need to do."

But even in their lone win over the Jets, there were long stretches in which the offense failed to execute. Add to that an entire game against the Cowboys and at least a half against the Redskins and the Falcons, and one starts to wonder if these are the right players to execute the offense.

That's where GM Kelly comes in.

And why does GM Kelly have this confidence?

Because he has ultimate confidence in himself; they're his players after all. And because they're playing for the only coach the Eagles GM trusts, Chip Kelly. And because of his scheme, which -- at least in his mind -- will work with whatever players he plugs in. It's why he was comfortable getting rid of so many talented players that thrived in his system.

And by being stubborn about it now, Kelly is doing something his predecessor never did: placing the blame squarely on the shoulders of his players. It's almost enough to make you miss Andy Reid's "I have to do a better job" pressers.

Don't get me wrong, the players are not without fault here. Kelly has a point when he says they need to execute better, but neither the coach nor the GM is doing them many favors. And by calling them out publicly -- even if not by name -- he risks losing whatever cache he's created for himself inside NovaCare.

Here's one example of an exchange between the media and Coach Kelly:

So it's not adjustments? It's productivity that's happening in the second half and not the first? It's not a result of adjustments?

Is that just random then?

Yeah, because it's not just one guy. If it was one guy, it would be an easy switch; we can move ‘this’ guy in and move ‘this’ guy out. But it's a consistent thing. In the other games, we had key drops in Dallas on third down where the ball hits us in the hands and now we stay on the field. It's a third-and-5, we complete a pass for third-and-8, but the ball is dropped on a third-and-8, so then we are off the field. It's a matter of -- and again, it's not the same guy. It's a different guy each time where it's not one specific thing.

There are plays to be made there; we are just not making the plays right now.

And then a follow-up, which was answered by GM Kelly:

Does that part of it concern you the most, that it's a different person on each play?

Yeah, it does. And they are guys that we know are good football players.

But the difference in this league, right now, is almost every game when you look up, is a less-than-one-score-game. It's a one score game in terms of -- I think 31 of the 62 games so far have been decided by eight points or less.

And that's really where the problems begin.

Kelly, at least so far, refuses to admit any mistakes in the way he handled the roster overhaul this offseason. He also refuses to budge on his scheme or style offensively. He would only go as far as to say he evaluates all of the play calls after each game, but wouldn't say whether or not he made all the right call.

Instead, he'll continue to throw the same players out there and try to run the same plays week in and week out. His stubbornness, the same kind that can be a huge advantage in some instances, is without check.

When it's working, we're fine with chalking it up to Chip being Chip. It's only when it fails to produce that we see just how insanely wrong things can go.