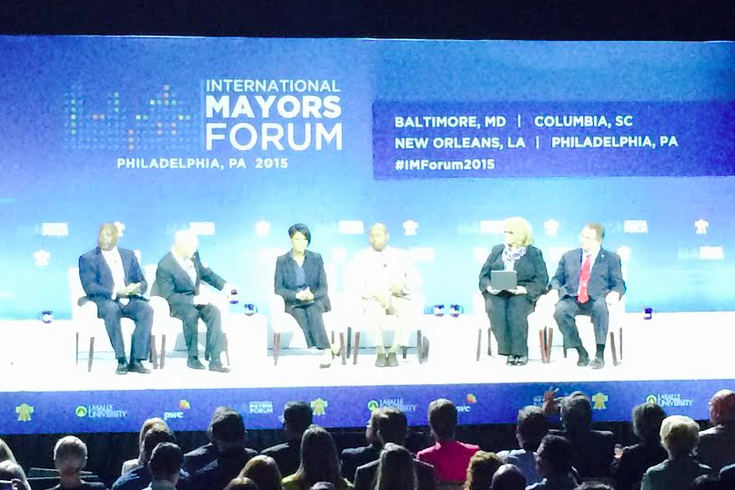 On Wednesday night, the mayors of four American cities met at LaSalle University to discuss how families, the focus of the World Meeting of Families, can be challenged and strengthen in cities and Baltimore Mayor Stephanie Rawlings-Blake directly addressed the year's most divisive issue.
"If we're going to talk about cities as families, we have to speak frankly with one another," she responded when asked about the fissure of trust following the controversial death of Freddie Gray and Baltimore's ensuing riots in April.
"Police brutality was more than a perception, it was the reality," she said. "It was ugly, dangerous, and traumatic. It's a journey to bridge the gap of racial disparity, but we have to have tough, critical conversations as a family to rebuild that trust. It's the only way to move forward as a city."
The inaugural International Mayors Forum, organized as part of the World Meeting of Families, was devoted to examining how public policy and city programs can strengthen families amid the 21st century's megatrend of urbanization.
With 50 percent of the global population now living in cities -- and 1.5 million people adding to that total every week -- the evolving nature of family life has become increasingly linked with the shared experience of urban environments.
Philadelphia Mayor Michael Nutter, New Orleans Mayor Mitchell Landrieu, Columbus Mayor Stephen Benjamin, and Rawlings-Blake each fielded questions from La Salle President Colleen Hanycz and University of Pennsylvania Professor John Dilulio as the 90-minute discussion ranged from natural disasters and civil strife to education and economic instability.
Dilulio, referring to New Orleans as "a laboratory of American democracy over the past 10 years," invited Mayor Landrieu to talk about the lessons learned from his city's human, physical and financial recovery after the destruction of Hurricane Katrina.
"We lost 1,800 people, more than 5,000 homes. Churches, hospitals, schools," Landrieu said. "An essential truth made itself manifest: we couldn't get along without each other. It was the spiritual component of the community, not just the physicality of what the city used to be, that helped us recover. No matter what comes your way -- hurricane, terrorist attack, anything -- you will be able to come back if you have the integrity of social institutions like a family in place."
Nutter, praised as a great leader by his fellow panel members, spoke aggressively about the need to make higher education more accessible to support families and spur the revival of cities.
"The only thing we absolutely, positively know is that well-educated people take care of themselves and lift their families out of poverty. The opportunity for college is certainly there, but we cannot say that it is a fully accessible system. We create an illusion and we have to figure out how to drive down these costs significantly to truly create real access for every child who wants to go to post-secondary education."
In Columbus, South Carolina, Benjamin attributed his city's boost in employment and private sector investment to setting a clear vision for the character of the community.
"We've been focused on being one city, one Columbia. What we've tried to do is make it clear what our vision is for our city, and that vision is clear regardless of who you are, where you live, if you've been there for generations or if you're a brand new citizen. We want to be the most talented, educated city in America."
The mayors noted that family disintegration has to do with the stress of financial struggles borne out of strained health care and educational systems. Their suggestion to average citizens who want to become more involved in improving outcomes was to embrace the virtues of democracy.
Nutter talked about the imperative of voter participation, while mayors Rawlings-Blake and Benjamin discussed the effect of engagement with elected officials at city meetings. Landrieu urged people to work hard at restoring the concept of good citizenship.
"I think America feels stuck right now, and I think that’s unfortunate," Landrieu said. "The whole concept of citizenship and treating each other well has gone away. We have to rethink how we’re acting and talking to each other."
Special guest Archbishop Vincenzo Paglia of the Holy See's Pontifical Council of the Families presented the mayors with a special medal depicting the holy family and the pope's code of honor on the front. "The future of families and the future of cities is only one future," Paglia told the audience.
Anticipating Pope Francis' various addresses to the nation, the mayors each expressed a wish that he be forthright in his advocacy for families against "sinful inequalities," both economic and spiritual, even if it means challenging the dysfunction on Capitol Hill.
"I hope the pope keeps doing his thing, and calls people out on their hypocrisy," said Nutter, who will host Pope Francis in Philadelphia on Saturday and Sunday. "There’s not a member of Congress who would want a member of their family to go through what happens to people across America, from racial injustice and violence to poverty."
Rawlings-Blake urged Pope Francis to speak about choosing love.
"I get very afraid of what the next few years are going to be for our country when we accept as the norm, and we celebrate, the level of inhumanity and instability that we have seen," Rawlings-Blake said. "We're better than this, and I hope the pope recognizes this and puts that charge in front of Congress."