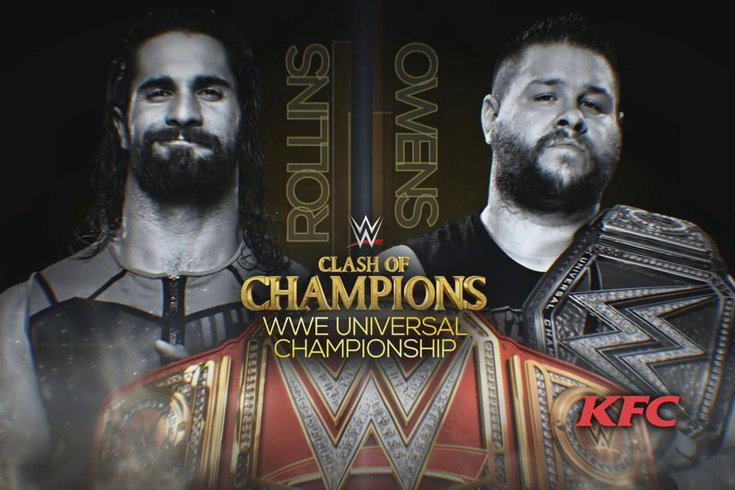 The first Raw pay-per-view following the brand extension features a name very familiar to wrestling fans. Night of Champions always seemed to miss the mark with me and many, but now that the Clash of Champions returns, we can all breathe a little easier.

Because, you know, pay-per-view names are serious business.

The Bankers Life Fieldhouse in Indianapolis will host Raw’s first offering Sunday night, where every championship on the red brand will be up for grabs, including the newly unveiled Cruiserweight Championship.

I always enjoy a show where a lot of titles are on the line, so I’m looking forward to this one. This card also features some interesting matchups and I’m eager to see what comes from a lot of these matches.

Here are my predictions for what goes down on Sunday night:

Once upon a time, Nia Jax squashed Alicia Fox.

And now we’re going to likely get Jax squashing Fox again on the Clash of Champions Kickoff Pre-Show. I think this type of match is perfect for a pre-show. An enhancement match like this for Jax is great for her. There have been many Kickoff Pre-Show matches that haven’t been good, a waste of time.

Hell, even if the matches are good, they don’t mean anything. So this is a perfect pre-show match. And Jax will prevail. Unless she doesn’t.

There’s some history between these two as it relates to their interaction on the main roster, and I think these two will deliver a good match. But as is the case with a lot of matches in WWE, what exactly are Zayn and Jericho fighting for? Bragging rights? A title shot?

Sheamus and Cesaro are competing in a best-of-seven series for a championship opportunity – likely a shot at Rusev’s United States title. What does this match between Zayn and Jericho do for the winner?

If anything, Zayn should get the win here despite Jericho having a great run this past year. Yeah, we all know wins and losses don’t matter to WWE in the grand scheme of things – it’s all about the storyline. And I can appreciate a good story behind wins and losses, but all too often in WWE does the story fall flat or the payoff never comes. In some instances, the payoff isn’t even good enough.

Sami Zayn has been lost on Raw after his feud with Kevin Owens was put on the backburner. I say backburner because it’s brought up on commentary and even a few weeks ago, the two faced each other in a match on Raw. So there’s clearly still a story there that will never be forgotten. It shouldn’t be forgotten, because it might just be the best feud WWE has had since the Cena-Edge feud that spanned a couple of years.

Hopefully the right decision is made and Zayn goes over, setting him for something greater in the future.

Benoit wound up losing to Booker T in 2005 after coming back from a 3-0 deficit, as Booker had Randy Orton step into his spot as he suffered from a legitimate injury. Benoit beat Orton twice, but ultimately failed in his quest to come back from a 3-0 hole. But, hey, at least the Flyers did it against the Bruins in 2010.

Pure magic. But I digress.

Is that what WWE is planning for this series? Cesaro coming back from a 3-0 deficit? Or will the story arc be Cesaro overcoming huge odds but ultimately failing to give Sheamus the victory in the series? Everyone obviously thinks Cesaro needs to be utilized in a better way than he has been recently, and this could be step one on that path.

But then that leaves Sheamus without a dog to fight. None of these guys can lose. I don’t think we see an ending full of shenanigans, but I also think the loser of this comes out a lot worse than the winner.

And they say wins and losses don’t matter. Please. I’m going with the Swiss Superman.

The New Day © vs. Luke Gallows and Karl Anderson

I’ve thought for a while that New Day’s reign has finally lasted long enough and that it’s time to give some other tag teams a chance to wear the gold. With The New Day being as over as they still are, I don’t think they need the tag titles at all.

But there’s been no adequate replacement to carry the gold, either. I thought maybe Gallows and Anderson were, but ever since they debuted and sided with AJ Styles, there’s been nothing special about them. They’re showing some personality now after the brand extension began, and they could really use the tag team titles to further cement them as a top team on Raw.

Unfortunately, anyone that comes after New Day will have tremendously big shoes to fill. But if anyone can do it, Gallows and Anderson can. A New Day split is inevitable, but I’m not sure they’re ready to pull the plug on the group just yet. They’re still far too popular at this point.

For that very reason, I think the champions retain.

The more I thought about this match, the more I can accept Brian Kendrick being the challenger to TJ Perkins in the first title defense of Raw’s new Cruiserweight Championship. At first, I thought it would be great to have Perkins and Gran Metalik face each other in a rematch from the Cruiserweight Classic Final from last Wednesday, solely because that was one of the best matches of the year. The drama was spectacular.

There’s no reason they couldn’t rekindle that at The Clash. However, there’s nothing wrong with how they introduced the cruiserweights on Raw Monday and having Brian Kendrick win a Fatal Four Way No. 1 contender’s match. Perkins and Kendrick avoided each other in the Cruiserweight Classic and Perkins defeated Kota Ibushi, who was the man to defeat Kendrick. So there’s an interesting story arc here.

I really dig Kendrick, but I just don’t think they’ll have Perkins drop the belt this quickly, even if Kendrick has somewhat more name value. This is just the beginning of the road for Perkins.

What happened between Rusev and Roman Reigns at SummerSlam still leaves a bit of a sour taste in my mouth. The two were set to square off for the United States title, then Reigns attacks Rusev before the match even starts and the match never happens.

I understand how different the business is now compared to when I was growing up, but if that ever happened on a pay-per-view – and, yes, I understand the WWE Network changes the game for everything – people would be demanding a refund.

Yes, a Rusev-Reigns match doesn’t blow the socks off of many. I, however, am amped to see these guys compete. Sure, they’ve faced each other before on television, but this feud now has an added layer to it. Can you imagine Reigns as U.S. Champion? That probably would’ve helped the fans to accept him more on his rise to the top of the company last year. Could they be rebuilding him?

Maybe. Rusev’s been a great champion and I still think he has a lot to offer. If he loses the title, then what? A continuation of the feud with Reigns? Who else could he face? Maybe he retains the title, but Reigns wins, and Rusev’s next challenger is Cesaro. There are a few avenues to take in this match. I won’t be able to consciously see Reigns win a mid-card title until it actually happens.

Charlotte © vs. Sasha Banks vs. Bayley

Originally, this match was scheduled to be a return bout between Charlotte and Sasha Banks. Banks lost the Women’s Championship at SummerSlam, somewhat surprisingly, due to nagging injuries and needed time to get her back checked out.

Indeed, everything did check out, and Banks has returned and is poised to take back what’s now the Raw’s Women’s Championship from the woman who took it from her back in August, Charlotte. Bayley was added to the mix, likely because she’s the newest wrestler in the women’s division, and because she’s absolutely awesome in the ring. She’ll do nothing but make this match better with her involvement.

I feel like WWE decided to pull the title from Banks after she won it mere weeks before on Raw because they didn’t know her outlook as far as her back injury was concerned. Now, she’s back, and I think they’ll pick up where they left off and give her the title back with a real chance at a great run.

Charlotte had a great run from this time last year through the first half of this year. It’s Banks’ time to shine. With Bayley involved, I’m not sure how long Banks’ time will be, but it absolutely should be now. Will we see a heel turn from Banks or Bayley? Entirely possible. But they should put the title back on Banks as long as she’s healthy enough to compete each and every week.

Now it’s time to see how the crowd will react to Seth Rollins in his first pay-per-view main event as a babyface. They’re surely pushing Rollins that way and they’ve been smart about it. He doesn’t come out and tell the crowd he loves them now because that wouldn’t make any sense after he returned in April and promptly turned on the fans again. They’re playing this smart so far with Triple H costing him the Universal Championship a few weeks ago on Raw and giving it to his new anointed one, Kevin Owens.

We haven’t seen or heard from Triple H since then, so I think he makes an impact at some point during this match. I’d imagine he shows up when it looks like Rollins is moments away from capturing the title.

I don’t think Rollins will be champion any time soon. It’s clear he and Triple H will eventually wrestle a one-on-one match. Whether they wait until WrestleMania is anyone’s guess; I think they should.

If Triple H doesn’t show up, I feel like some other shenanigans will happen preventing Rollins from becoming Universal Champion. Like it or not, Rollins is now the top face on Raw. He’s going to be screwed. And with Rollins’ promo on Stephanie McMahon on Monday Night Raw, I feel like that person to screw Rollins will be the Raw commissioner.

Whether he needs to be is another story. Owens is fine on his own and one hell of a heel, but heels cheat to win. I just don’t think he’ll pin Rollins clean Sunday night. That doesn’t make him any less impressive. How this main event ends will likely foreshadow how the road to Hell in a Cell plays out.

Whatever happens Sunday night, I think the very next night on Raw, we’ll start seeing the build to October’s Raw pay-per-view, Hell in a Cell. There’s also no Enzo Amore and Big Cass booked on this show, but I expect them to make an appearance and be involved in some sort of segment. It’s criminal they’re not in the tag team hunt right now, and if WWE pulls the trigger early on this team and sends Big Cass into the spotlight while making Enzo an afterthought, that won’t be good.

Or they’ll just beat up the Shining Stars in a match added at the last minute.

But, I digress. Stay tuned to PhillyVoice for a full, in-depth recap of Clash of Champions on Monday morning.