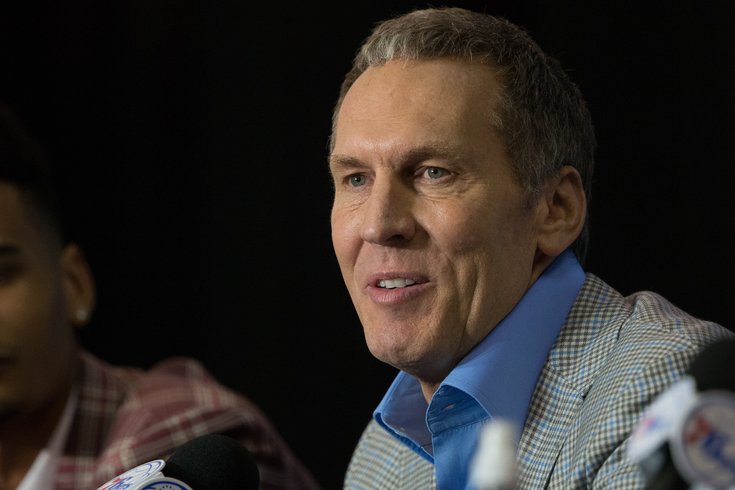 "That is a normal collar. Move on, find a new slant," said someone definitely not named Bryan Colangelo.

Before long, whether by his own accord or by order of his bosses, Bryan Colangelo will find himself looking for a new job. From where I'm sitting, there's just no way he survives this. For the best interest of the entire organization, he should step down immediately, or the Sixers should take matters into their own hands.

Even if Colangelo is able to talk himself out of some of this mess and prove that one or more of the alleged fake accounts didn't belong to him, there's no way the Sixers can allow him to continue.

And every minute that passes with him still running the franchise, now that he's seemingly lost whatever credibility he had left following two-plus years of general distrust between fans and front office, is a mistake the Sixers will have to somehow try to explain later.

That's why, in addition to laughing at Colangelo along with the rest of the basketball world, Sixers fans, especially those still devoted to former general manager Sam Hinkie, should be thanking the current (and soon-to-be fellow former) GM for his reckless behavior on Twitter since his arrival in Philadelphia.

It almost sounds too ridiculous to be true, like we're talking about a petty grudge held by an angsty insecure tween instead of the behind-the-scenes operations of the top executive of a professional sports organization. That fantasy, however, isn't too far removed from a mind-boggling potential reality revealed by The Ringer's Ben Detrick late Tuesday night.

The general manager and president of basketball operations for the Philadelphia 76ers was allegedly operating multiple fake Twitter accounts, and using those accounts to rip his players and his predecessor, to defend himself, and, if the allegations prove true, potentially leak privileged medical information (in violation of HIPAA laws). The team has launched an investigation into their own general manager — and an NBA investigation is likely to follow.

Whether or not Colangelo is proven guilty of all the accusations, the optics aren't great (to borrow from the Hinkie lexicon).

The Sixers, who won 52 games this season and nearly doubled their win total from the previous year, are once again the laughingstock of the league, which is precisely the moniker they were so furiously running from when the league helped force out Hinkie by merging the team with House Colangelo – first Jerry, then Bryan.

And if the Ringer's accusations turn out to be true — they're quite convincing — NBA commissioner Adam Silver could be forced to step in once again, this time to remove the younger Colangelo from a seat of power he was never supposed to occupy in the first place.

Fate, it seems, is not without a sense of irony.

To top it all off, it wasn't some battle-tested basketball writer or disgruntled former player who brought Burner-gate to light. No, it was a data nerd specializing in artificial intelligence, the kind that would follow Hinkie through the gates of hell – which for them I imagine is a dinner party at Stan Van Gundy's house.

The timing of the story is also interesting, not only because we're less than a month from the NBA Draft (and the free agency frenzy that follows), but also because of where the Sixers are in their current rebuild. They're a team on the rise, and there's no reason to think that, after adding a few veteran free agents and a pair of first-round picks (AND Markelle Fultz) to the roster, they won't be even better next year. And better the year after? Why not?

What this story actually did – again, assuming these overwhelmingly damning allegations prove true — was reveal another side of Colangelo, a slightly more dishonest and oily side that many suspected was there all along. And, in doing so, brought to light many other issues with the Sixers GM that had become masked by the team's rapid improvement thanks to players largely acquired as a result of the prior regime's rebuilding strategy.

•  How dumb do you have to be? If nothing else, Burner-gate has taught us that Bryan Colangelo isn't actually smart. Having one burner account to keep tabs on players and what people in the media are saying about you and your team is one thing, but this is just reckless. And tweeting out exclusively pro-Colangelo messages? Damn, man. Hinkie may like sounding smarter than everyone (and most times, it's because he is), but at least he's not the guy running around telling everyone that he's smarter than you. Because that guy is never smarter than you.

•  Honesty isn't really his thing. Duh. And that's kind of an important quality for a general manager.

•  How petty and insecure can one person be? Forget about the shots at Hinkie and all the players drafted during his tenure, the guy is out here defending the size of his collars. If you can't handle criticism like that, what are you doing running a basketball team? Grow some thicker skin – or a longer neck so the collars fit properly. Either way...

•  Talk about being unprofessional. Disclosing medical info? Trashing current players? Tweeting out your draft strategy? That's one way of conducting business. And with all that time spent on his various accounts, how did Colangelo ever find time to do his actual job? It's becoming quite obvious that he only cares about one thing: Bryan Colangelo.

•  Colangelo was born on third base thinking he hit a triple. Don't worry, that's not a cross-sports reference, just an allusion to the fact that all of these above flaws can be tied into the fact that Colangelo's tenure in Philly was a direct result of some good, old-fashioned nepotism.

Before Tuesday night, there was a good chance Sixers fans were stuck with Colangelo for the long haul. And there was no reason to believe that was ever going to lead to a championship – just ask his previous teams. Now, however, we've likely seen the last of him.

When your own players are taking public shots at you, there's not much that can be done to mend your credibility — even if they wind up walking it back later.

And, because of that, it's hard to see how Colangelo is working in any NBA front office next season, let alone with the Sixers, no matter the outcome of the team's independent investigation.