Howard Eskin to Cole Beasley: 'Happy to hold your hand' for COVID-19 shot 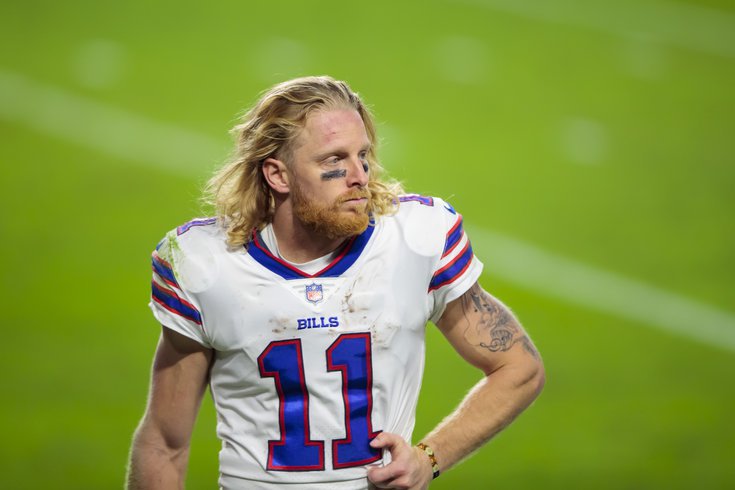 Buffalo Bills wide receiver Cole Beasley has been vocal about his refusal to get a COVID-19 vaccine. His arguments continue to be based in selfishness and pride.

Buffalo Bills wide receiver Cole Beasley has spent most of the NFL offseason loudly and obnoxiously complaining about the way the league has incentivized COVID-19 vaccination for players and teams. It's not just that he personally wants to avoid vaccination. He's made himself the face of resistance to a public health measure that saves lives and hastens the weakening of the threat.

Beasley's latest complaint is that vaccinated NFL players are only required to be tested once per week, while unvaccinated players must be tested daily and adhere to other COVID-19 protocols that restrict their activities. He fired back at NFL Hall of Famer Michael Irvin for suggesting that unvaccinated players aren't prioritizing winning, implying that the rules are basically a facade for the league to carry on without significant interruption.

That’s not what that means. You can be vaccinated and not do all the right things football wise to be at your best. All it means is players are gonna be out there with covid and we won’t know cause they only get tested once a week so the NFL can make their money. https://t.co/VukRFeeOp3

One of the arguments Beasley has tried to make is that vaccinated players are still a risk to get a breakthrough case of COVID-19 and pass it on to their teammates, who will then miss time regardless of how serious their illness is. By requiring only one weekly test from vaccinated players, the NFL puts the whole team at greater risk, according to Beasley's narrow-minded view of the pandemic.

This spilled into an argument on Tuesday with longtime SportsRadio WIP host and Eagles sideline reporter Howard Eskin. These two have some history tied to the Eagles-Cowboys rivalry, including Beasley calling Eskin dumb and Eskin making fun of Beasley's rap music when he was still in Dallas.

In an exchange with Beasley on Twitter, Eskin offered to hold Beasley's hand while he gets a COVID-19 shot.

Cole Beasley may be a good receiver for the #Bills but you’re a flat out dope. Can you read the numbers and how serious it is for people that are not vaccinated. So tired hearing you spew garbage about people testing positive with vaccine, but its mild. You @Bease11 are a #Dope. https://t.co/K68LDIzTHH

Hey man you were cordial when we met and I’m honorary member of #BillsMafia but ok to get the shot. You would set the table for others who resist. More people vaccinated, less the spread of #COVID19 and now new variant is dangerous. I’d be happy to hold your hand when u get shot. https://t.co/kmUw8XjHio

The imagery actually dates back to an Eskin tweet before an Eagles-Cowboys game in 2018.

Glad to see ⁦@Bease11⁩ is back on the practice field today for #cowboys. Looking forward to seeing you on Sunday when #eagles are in Dallas. Don’t forget Cole.. who’s your daddy. ⁦@SportsRadioWIP⁩ pic.twitter.com/8JS3fCBUAM

Putting aside how wild it is that Cole Beasley instantly makes Howard Eskin the reasonable one, it's really Beasley's entire outlook on this that has become insufferable.

At a time when COVID-19 cases are rising in all 50 states, driven by the doubly infectious Delta variant, a lag in vaccinations is the worst path forward. Public figures who fuel and influence skepticism — guys like Beasley and half of the Philadelphia Phillies, apparently — are actively prolonging the pandemic when we have safe, effective vaccines that can slow it down and greatly minimize serious infections moving forward.

Beasley's arguments are incoherently selfish. They have everything to do with his annoyance over the NFL's policies cramping his individual choice and nothing to do with any logical argument against vaccination. He's claimed not to be making that argument — and speaking only for himself — despite returning to his platform again and again to give it legitimacy in the form of his unfounded gripes. He's making the impossible argument that the NFL tailoring its protocols toward the goal of vaccination somehow has more holes and associated COVID-19 risks than players choosing to remain unvaccinated.

The sad part about it is that Beasley eventually gets tired of the predictable backlash and then fires off defensive tweets that make his whole fight seem even more pathetic and vain.

I’ll get vaccinated and be an advocate for it if Pfizer puts a percentage of its earnings from the vaccine in my wife’s name. https://t.co/2tOr9jjDaM

Obviously I don’t really think they’re going to give me anything. It’s not about money if I’m willing to play for free this year. Y’all are just sensitive as hell and nobody can say anything these days. Everything is life and death with any issue to people. https://t.co/RB4GEJBPC7

I get it. I’m dumb you guys are smart. I have an awesome family. They’re taken care of forever and I’m only 32 years old. I have a great life. I’d say I’ve done pretty well for a dumb guy with CTE.

Leave it to Dallas Mavericks owner Mark Cuban to offer to buy Beasley's wife stock in Pfizer if he gets vaccinated.

When half of the United States population remains unvaccinated for various reasons, people like Beasley who have made up their mind would do everyone a favor, including themselves, by owning the social and occupational consequences of their right of refusal. Their inability to analyze the issue from any angle other than their petulant personal beliefs means they'll always find a way to think they're right about it, and that's a position they can enjoy just as easily by not spreading misinformation.

Not everything is life and death, but this actually is.