Everyone can find ways to 'serve the cause of freedom,' the former secretary of state said in 2002 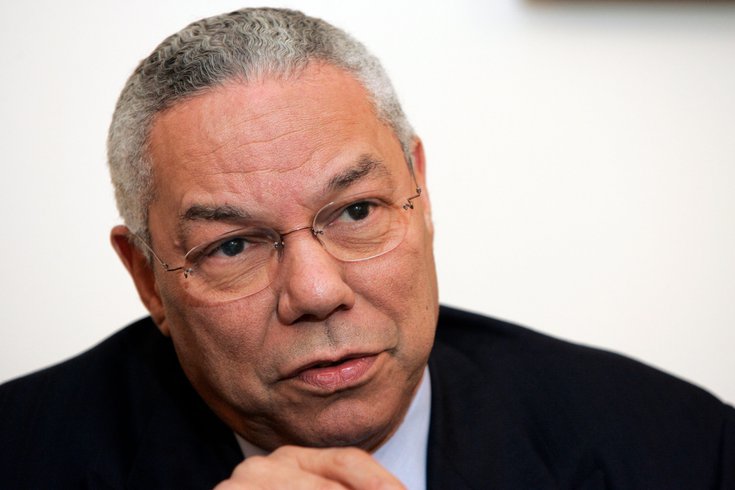 Colin Powell called on Americans to recommit themselves to public service and helping others during his Liberty Medal acceptance speech in Philadelphia on July 4, 2002.

Colin Powell, the four-star Army general who became the first Black secretary of state in American history, died Monday at age 84 from complications caused by COVID-19.

Powell had been fully vaccinated, but the New York City native had been treated in recent years for the blood cancer multiple myeloma, according to his family.

Powell's military and diplomatic accomplishments were recognized in 2002 when he was selected to receive the Liberty Medal in Philadelphia.

Established in 1988, the award honors people "of courage and conviction who strive to secure the blessings of liberty to people around the globe," according to the National Constitution Center, which now presents it. Other notable recipients include former Supreme Court Justice Ruth Bader Ginsburg, former President Jimmy Carter and former U.S. Sen. John McCain.

At the time, selection chairman Martin Meyerson called Powell a giant, acknowledging his support of human rights, pursuit of peace in the Middle East and efforts to bring democracy to Afghanistan.

Powell received the award as part of Philadelphia's Fourth of July celebration. In his remarks, Powell said he was accepting the medal "not as a reward for any service I have rendered, but as a symbol of the service I yet owe to our wonderful country."

Powell spent much of his speech encouraging Americans to rededicate themselves to public service and helping others.

"I have received so much from this country; I feel that debt very heavily," Powell said. "But don't we all? Don't we all feel the same obligation, as lucky Americans, to give back to this country as much as it has given to us, and more?

"Being an American citizen is a privilege, whether you're a 10th generation mainline Philadelphian, or a child of immigrants, as I am," he continued. "Citizenship means more than a conferral of rights through the accident of birth or the act of naturalization; citizenship brings with it the most solemn obligations — an obligation to uphold and defend the values of freedom, justice and democracy that make Americans, in all of our diversity, one nation, one nation — and yes, one nation under God, indivisible."

Powell's remarks came at a pivotal time in American history. The country was less than a year removed from the Sept. 11 terrorist attacks. The war in Afghanistan already had begun, and the Iraq War — a conflict for which Powell received widespread criticism during his tenure as secretary of state — was on the horizon.

Powell said all Americans, not just service members or politicians, have opportunities to commit to public service in their everyday lives.

"You do not need to join the military or work in government to perform public service, but I certainly applaud both. But everybody can make the time to serve on a school board, volunteer at a local shelter, mentor a kid who needs someone to care," he continued. "We can take a stand for tolerance whenever we encounter prejudice. We can honor the service of others and teach our children to do the same. We can lend support to refugees fleeing foreign tyrants. We can express our unity with those around the world who work in freedom's name."

Powell's address was not the only time that his voice was heard in Philadelphia. He served a 12-year term from 2006-2018 as chairman of the Eisenhower Fellowships, a Philly nonprofit that provides leaders and professionals with opportunities to complete innovative projects in the U.S. and overseas.

When Powell's term ended three years ago, the city honored him with a painted mural located at Olney Charter School in Northeast Philly.

Additionally, Powell's voice was used in Philly's first talking pedestrian signal. From 1997 to 2006, his voice informed pedestrians when it was safe to cross Broad Street at Montgomery Avenue on Temple University's campus.