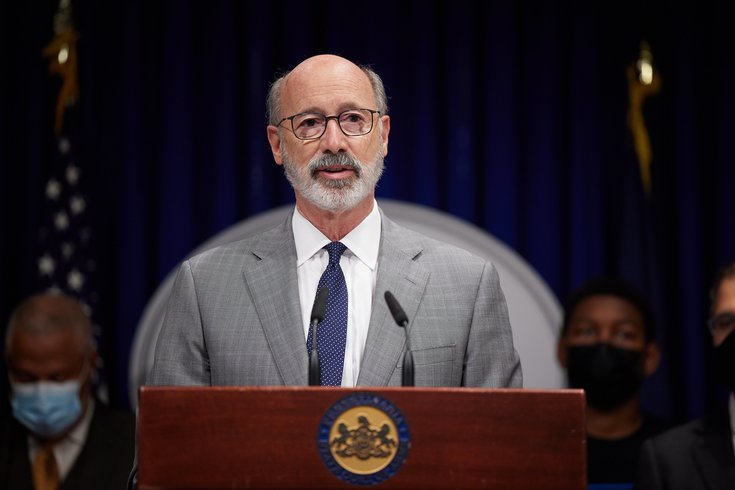 Gov. Tom Wolf signed an executive order on Tuesday aimed at discouraging the use of conversion therapy in Pennsylvania. The action directs all state agencies to promote evidence-based best practices for LGBTQ+ people that are supported by medical professionals.

An executive order signed by Gov. Tom Wolf on Tuesday seeks to protect LGBTQ+ youth from conversion therapy by ensuring state resources are not used to provide or authorize the practice.

Conversion therapy, also known as "reparative" or "reorientation" therapy, is a discredited method of counseling that's meant to change a person's sexual orientation or gender identity. It's been condemned by most reputable medical and psychological organizations, including the American Medical Association and the American Psychological Association.

Democratic state lawmakers, including Rep. Brian Sims, of Philadelphia, have led the movement to ban the practice for more than a decade. While Pennsylvania has yet to outlaw it, due in part to the Republican-led legislature, the executive order moves it closer in that direction.

"Conversion therapy is a traumatic practice based on junk science that actively harms people it supposedly seeks to treat," Wolf said. "This discriminatory practice is widely rejected by medical and scientific professionals and has been proven to lead to worse mental health outcomes for LGBTQIA+ youth subjected to it. This is about keeping our children safe from bullying and extreme practices that harm them."

The order imposes a three-step plan aimed at preventing the use of conversion therapy. The first step directs all state agencies to discourage its use and to promote evidence-based best practices for LGBTQ+ people that are supported by medical professionals.

Rightwing extremists across the nation have been using their power to bully LGBTQIA+ youth.

I want all our kids to know that they matter and they belong. And in PA, we have their back.

The executive action directs DHS to investigate any reports of conversion therapy paid for by state insurance. It also has a method for reporting professionals who cause harm to patients through its use.

Wolf noted during his press conference Tuesday that the executive order is the most he can do without the legislature.

So far, 12 municipalities and two counties in Pennsylvania have outlawed conversion therapy for minors, with many local officials saying it's a "deceptive" practice that involves psychological abuse and shame. Philadelphia moved to ban the practice in 2017.

"Philadelphia stands as a city of love, acceptance and hope for all people," Mayor Jim Kenney said when the ordinance was passed. "Our LGBTQ youth cannot and will not be subjected to the torment and torture of conversion therapy in our city. I am heartened by passing similar bills and hope the message resounds nationwide: We cannot stand for any violence of any kind against people for who they are or who they love."

CONVERSION THERAPY BAN! Conversion Abuse has no place in modern society and we’ve been working to ban it in Pennsylvania for 10 years! Thank you Governor @TomWolfPA for getting us one step closer to fully eradicating conversion abuse in the commonwealth. 1/4 pic.twitter.com/vr09oDgLXZ

Sims praised Wolf and LGBTQ+ organizations, like The Trevor Project, for helping to try and eliminate conversion therapy in the state.

In a survey of LGBTQ+ youth, The Trevor Project found 17% reported being threatened with or subjected to conversion therapy. Research has shown that LGBTQ+ youth exposed to the practice are at an increased risk of depression and suicide.

Sims has introduced several bills aimed at outlawing conversion therapy during his tenure as a state representative, but each of them have stalled in the legislature.

"This disgusting and archaic practice of conversion therapy has no place in modern society," said Sims. "After 10 years of advocacy, and with the help of multiple partners and the leadership of the Trevor Project, we're happy to see that a ban on conversion therapy is closer than ever. These pseudoscientific practitioners who claim to be able to change a person's sexual orientation or gender identity are a major cause of depression for LGBTQ+ children and young adults."

In the U.S., 20 states and Washington, D.C. have moved to ban conversion therapy for minors, according to Movement Advancement Project, which maps LGBTQ+ laws throughout the country.

At least five additional states have passed partial bans, most of which are similar to Wolf's executive order in that they target state funding and insurance coverage.