The regulations, which were implemented on July 1, limit the number of special events and prohibit outside food vendors 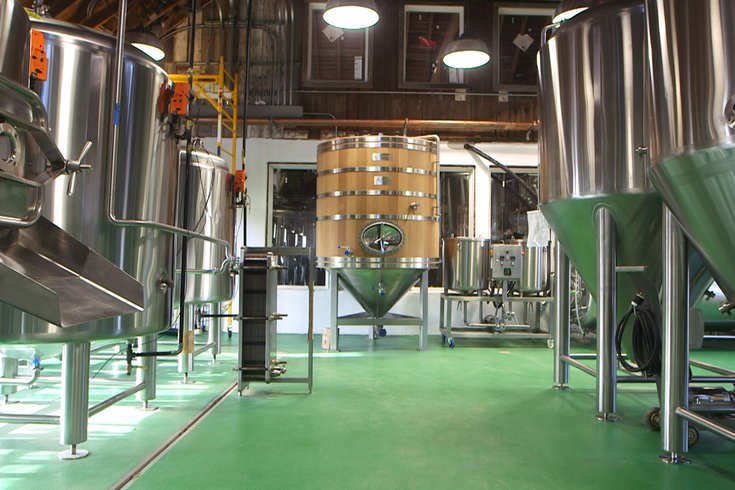 New Jersey lawmakers introduced two bills last week that would roll back new state restrictions placed on breweries. The rules went into effect on July 1 and caused outrage among brewery owners across the state. Pictured above is Source Brewing's brewhouse in Colts Neck, New Jersey.

Six weeks after New Jersey implemented regulations governing how craft breweries are able to operate, a bipartisan group of lawmakers introduced legislation meant to roll back some of the restrictions.

Sens. Vin Gopal and Linda Greenstein put forward two bipartisan bills last week that would eliminate several of the new rules. The initial measures were issued by the state's Division of Alcohol and Beverage Control in 2019 and went into effect on July 1.

The bills take issue with restrictions on the amount of special events a brewery can have each year, which can be a major source of revenue. In addition, the legislation removes a prohibition on breweries working with food vendors.

"New Jersey is home to a vibrant craft brewing sector and the state should be working to facilitate, rather than inhibit, its growth," said Gopal in a release. "This legislation will provide a fairer regulatory framework for the state's craft breweries and encourage collaboration between breweries and the state's other homegrown producers."

The bills have widespread support among Democrats and are being co-sponsored by Republican Sen. Declan O'Scanlon. O'Scanlon said that while he understands differentiating between breweries and bars, placing "arbitrary, overly restrictive rules" on breweries is unnecessary.

A post shared by Death of the Fox Brewing Co (@deathofthefoxbrewingco)

When the ABC regulations went into effect, brewers from around the state responded with concern and outrage over the negative impacts the new rules could have on their businesses. Among the loudest was Death of the Fox Brewing Co. in Gloucester County, whose owners immediately set out to inform customers of the changes.

In a series of Facebook posts, Chuck and Kat Garrity listed every provision of the ruling, urging patrons to contact their elected representatives for help in repealing the regulations. The two have since posted several updates about upcoming legislation and other efforts by local government.

Dale I. Archer, mayor of East Greenwich Township, sent a letter to Gov. Phil Murphy earlier this month voicing his opposition to the measures and asking him to issue an executive order repealing them.

Archer said that he has been working to prevent the regulations since ABC first began discussing them in 2018.

THANK YOU to Mayor Dale Archer and The East Greenwich Township Committee for their RESOLUTION and letter of support of...

Posted by Death of the Fox Brewing Company on Wednesday, August 10, 2022

He further noted that he isn't confident Death of the Fox will be able to survive financially under the new rules. Kat Garrity told NBC10 last month that limiting special events could be "crippling."

The new regulations state that breweries cannot hold more than 25 special events per year, no more than 52 private parties and no more than 12 special off-site events. "Special events" are defined as any event that utilizes live music or any that are advertised on social media. Breweries also are unable to sell food unless it's sold in pre-packaged containers.

Coffee is unable to be sold on-site, although Death of the Fox is still able to continue serving coffee at its dual concept East Greenwich Township brewery.

Other regulations include a requirement that all new customers must tour a facility before being able to drink, and prohibitions on pop-up events and outside food vendors.

"This ruling has placed an unfair and unjust burden on our brewery owners, staff, and patrons," said Greenstein. "Local breweries play a crucial role in the fabric of our communities, as well as in the culinary history and future of the state."

Sen. Michael Testa, who was one of the first state lawmakers to respond to complaints from brewery owners, also introduced a similar bill that would eliminate or alter nearly every one of the regulations.

"I believe that brewers building a business in our state deserve to have more say in how they run their operations because the term 'free enterprise' applies to them as well," said Testa. "I look forward to working with my colleagues and with legislators across the aisle to ending these bureaucratic obstacles and fix a dysfunctional system."

His bill would allow unlimited on-site special events each year, boost off-site events to 18 and eliminates the tour requirement. The bill also establishes a winery-brewery sublicense that would allow wineries to produce malt beverages to sell on-site to consumers.

The bills will be voted on in the coming weeks and months, though there is no official date set at this time.