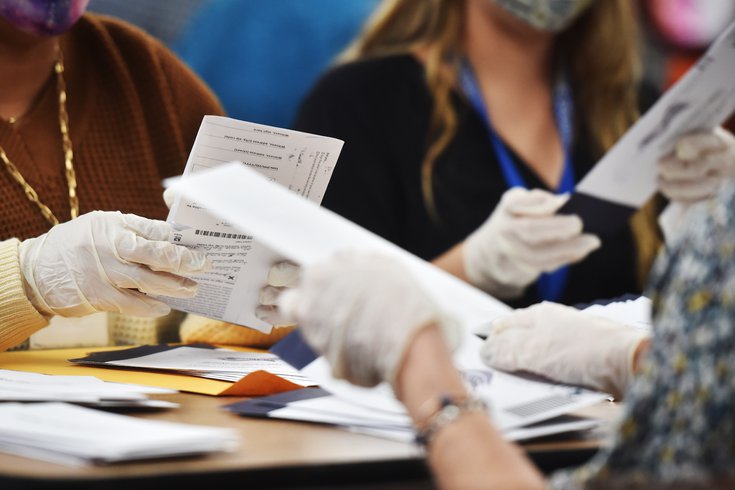 Several different protests took place in Philadelphia Wednesday afternoon to Thursday morning as residents urged Philly officials to keep counting votes for the 2020 election, stop counting votes, or to end police brutality and violence brought to light in the wake of the fatal police shooting of Walter Wallace Jr.

Protestors urged Philly officials to not cease counting mail-in ballots despite mounting pressure from a Trump lawsuit aimed at temporarily halting the counting of ballots, until campaign observers were allowed to more closely watch vote-counting.

Trump's administration won court approval on Thursday, permitting campaign observers greater access. Vote-counting was momentarily halted just before 12 p.m. at the Pennsylvania Convention Center in Philly, and then quickly resumed, according to the Inquirer.

"Count Every Vote" protestors included members of several local activist and progressive groups, including Protect Our Vote Philly and Socialist Alternative. They were joined by a handful of Philadelphia elected officials Wednesday.

Earlier today I spoke at a Pennsylvania Indivisible rally with @NikilSaval, @KendraPHL, and @HelenGymAtLarge about the importance of counting every vote in this election. Philadelphia threw down and we want to make sure our ballot box power is represented! #CountEveryVote pic.twitter.com/GUQ3YmKSpC

Later Wednesday night, both "Count the Vote" protestors arguing to uphold democracy in Philadelphia and Walter Wallace protestors demonstrating against police brutality and racism joined together, forming one large group.

As hundreds chant to “count every vote” on the north side of Philly City Hall, racial justice protesters have gathered on the south side as the city is about to release body cam footage of police killing of Walter Wallace Jr pic.twitter.com/YCye0fDsLu

Demonstrators gathered again early Thursday morning for a protest scheduled to meet at 12th and Arch Street near the Pennsylvania Convention Center, where Philadelphia's votes are being counted.

The crowd was still present outside the Center by the afternoon. Philly's famous dancing Elmo was spotted with a group of musicians playing tubas and drums and dancing with other demonstrators. Protestors held "Black Lives Matter" and Biden/Harris signs.

We got all the hits and the party is GROWING at the convention center as Trump supporters trying to stop the count watch helplessly. #joytothepolls on the outside, #counteveryvote on the inside #phillyvotes pic.twitter.com/My4OF3E89c

They were met by a smaller group of counter-protestors, holding calling to "Stop the Vote," in support of Trump legal actions. These protestors were spotted holding signs with slogans that read, among others, "Sorry, polls are closed"  and "Voting ends on Election Day," and other with Trump-Pence reelection signs.

"Stop the Vote" counter-protestors grew in number throughout the day and remained there in the afternoon. Police barricades and officers kept them separated from "Count Every Vote" protestors.

In #Philadelphia Count Every Vote protestors are on one side of the street as Trump supporters are on the other side. Police are in between. All car traffic is blocked on this side of the Pennsylvania Convention Center. #Election2020 pic.twitter.com/4suGHoabHJ

As of Thursday, there were still approximately 100,000 ballots submitted by mail yet to be counted in Philadelphia alone. Pennsylvania officials said Thursday that vote-counting could be completed today, potentially deciding the outcome of the presidential election.

The state is now one of four key battleground states that could possibly decide the race. Special attention is being paid to Pennsylvania due to its high number of electoral votes.

If the current trend of mail-in ballots tallied in favor of Joe Biden holds, Pennsylvania could turn blue despite Trump's early lead, giving the state's 20 electoral votes, and the election, to Biden.