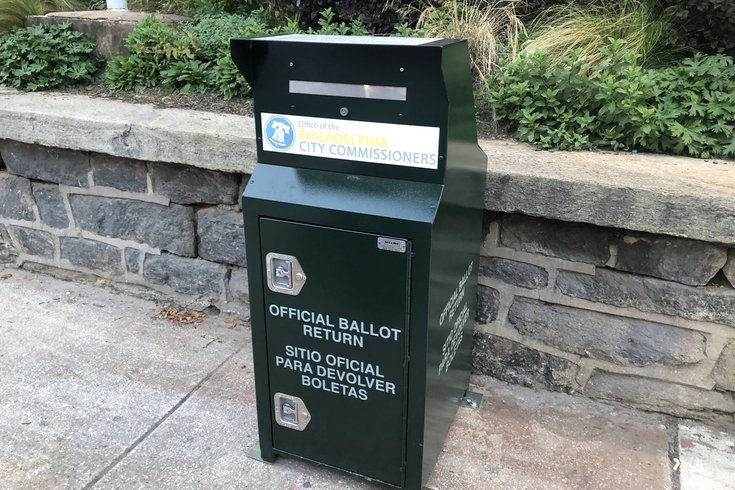 Philadelphia voters can submit their mail-in ballots in official drop boxes, including the one located outside Eastern State Penitentiary in the city's Fairmount neighborhood.

Election workers in Pennsylvania are continuing to count mail-in ballots and tally votes as a tight presidential race appears likely to pivot around a few battleground states.

By early Friday morning, Joe Biden had taken a lead over Donald Trump in the presidential race.

The state is in the process of counting more than 2.6 million mail-in ballots, and had reported counting about 2,518,569 as of Friday afternoon. About 1.4 million total votes remained to be counted at the start of the day on Wednesday, and around 112,796 remained by Friday afternoon.

As of 5 p.m. on Friday, Biden led Pennsylvania with 49.53% of the vote to Trump's 49.32% with more than 98% of precincts reporting, the Associated Press reported. Trump, who led from election night through Thursday, trailed by about 14,541 votes.

As a result of legal challenges, tabulations of a large batch of mail-in ballots in Allegheny County were delayed until Friday.

29,000 ballots in the Democratic stronghold were set aside on Thursday as a result of an agreement reached by all parties over a dispute related to mailing errors from a third-party service in September.

Approximately 70,461 outstanding mail-in ballots still remained to be counted in Philadelphia, its suburban counties and in Allegheny County by late Friday afternoon, according to the most recent State Department data.

About 337,609 of Philadelphia's mail-in ballots, out of a total of 358,644, had already been counted and reported — setting an election record for the city.  Another 353,021 votes were cast in-person at city polling locations on Nov. 3.

Approximately 40,000 mail-in ballots remained to be counted in Philadelphia, said City Commissioners Chairwoman Lisa Deeley. Ballots that require review, as well as provisional and military ballots, will be counted and reported over the next several days.

The 40,000 figure does not include segregated ballots that were received in the three days after election day on Nov. 3, Deeley said. She did not immediately have a number available for the amount of ballots that had been segregated.

Election results will not be officially certified until 20 days after the election.

Philadelphia's election return can be tracked at results.philadelphiavotes.com, the city commissioners said.

The mail-in vote count in Philadelphia was temporarily halted around noon on Thursday to resolve a Republican challenge over closer access to observation at the Pennsylvania Convention Center. The city appealed a Commonwealth court ruling and resumed the count.

"The city disagrees with the decision and is appealing," city spokesperson Mike Dunn said in a statement. "As the city appeals, the count is going forward. There was a brief pause in light of the ongoing litigation, but it has resumed in accordance with the law."

Pennsylvania Secretary of State Kathy Boockvar said most of the state's mail-in ballots were received by Election Day. Those received after Election Day, which are valid if received by 5 p.m. Friday, are relatively small in number.

"Some smaller counties are reporting anywhere from zero to some of the larger counties that have reported about 500 ballots received the day after Election Day," Boockvar said. "That's not that many, really. Unless it's super close, I don't see them making or breaking this one way or another. In the meantime, we are going to be counting every ballot."

On Wednesday, Wolf reiterated that the state is doing everything to ensure a complete and fair vote count.

"Pennsylvania will have a fair election and that election will be free of outside influences," Wolf said. "Every Pennsylvanian can have confidence in this election."

"We see 1.4 million outstanding ballots that will be counted over the coming days, most of them projected to be from Democratic-heavy areas and mail-in votes," she said. "We expect that these ballots will more than overcome Trump’s 600,000 vote margin that he is carrying right now."

Biden echoed that position during a Wednesday afternoon press conference, saying he expects he will have enough votes across the remaining states to win the White House.

I’m confident that we will emerge victorious.

But this will not be my victory alone.

It will be a victory for the American people. pic.twitter.com/ZqJBVsQuQf

President Donald Trump also claimed he would win Pennsylvania during an early morning address at the White House on Wednesday. His campaign has filed lawsuit to halt the vote count in Pennsylvania, and has separately sued Michigan over observer access to its absentee ballot vote count.

The Trump campaign had declared victory in Pennsylvania, and Trump himself "claimed" the commonwealth.

However, a substantial amount of legitimate mail-in ballots which have favored Biden still remained to be counted and continued to erode the president's lead.

Trump cast doubt on the entire electoral process during a Thursday press conference at the White House, claiming Democrats had rigged the election. He vowed court fights over the results of elections in several battleground states.

"We think there's going to be a lot of litigation because we have so much evidence, so much proof and it's going to end up perhaps at the highest court in the land," Trump claimed.

The president further singled out the cities of Philadelphia and Detroit as "two of the most corrupt political places anywhere in our country," charging them with attempts to engineer the outcome of the presidential race. He insisted that "legal votes" would support his re-election, while fraudulent votes were responsible for Biden's advances.

Earlier Thursday, Trump campaign officials told reporters that they "still have confidence in Pennsylvania" and are expecting to defeat Biden by more than 200,000 votes.

Republicans had been expected to hold an early lead in the state on as a larger proportion of mail-in votes were cast by Democrats. Votes cast at the polls can be reported more readily, while early mail-in votes could only be tabulated starting Tuesday.

The New York Times reported Wednesday morning that Biden's prospects appeared to be looking stronger as the count continues in Pennsylvania.

So far, Mr. Biden has won absentee voters in Pennsylvania, 78 percent to 21 percent, according to the Secretary of State’s office. The results comport with the findings of pre-election surveys and an analysis of absentee ballot requests, which all indicated that Mr. Biden held an overwhelming lead among absentee voters.

If Mr. Biden won the more than 1.4 million absentee votes by such a large margin, he would net around 800,000 votes — enough to overcome his deficit statewide.

On Wednesday, Boockvar said Pennsylvania was "exactly where we said we would be" with its vote count. She said the election and the ensuing vote count have gone "incredibly smooth."

Legal challenges, which had been anticipated, later resulted in some delays, but the state pressed forward and completed a significant share of its remaining mail-in vote tabulation by the end of the day Thursday.

The Pennsylvania Department of State has a dashboard that tracks the state's progress in counting mail-in ballots, as well as other key metrics in the ongoing vote count. (Note: the dashboard's count in Philadelphia may lag behind updates reported by city commissioners).

Wolf responded Wednesday to remarks from President Trump, who cast doubt on Pennsylvania's vote count — and the integrity of the election more broadly. Republicans in Pennsylvania directed their ire at Boockvar, suggesting she should step down or be replaced.

Let’s be clear: This is a partisan attack on Pennsylvania’s elections, our votes, and democracy.

Our counties are working tirelessly to process votes as quickly AND as accurately as possible.

Pennsylvania will have a fair election and we will count every vote.

Wolf vouched his support of Boockvar, who said she has no intention of stepping down. The governor assured voters that the state's vote count will be complete.

"While counting these ballots will take more time than in past years, Pennsylvania will have a fair election. Every eligible vote will be counted as it must be," Wolf said. "And make no mistake; we’re gonna stand up like we always have to anyone who wants to silence the voices of Pennsylvanians who have voted."

Mail-in ballots that were submitted by Nov. 3 will be counted as long as they are received by Nov. 6, a plan upheld by the U.S. Supreme Court decision last month.

Pennsylvania issued 3,099,504 mail-in ballots, of which 2,543,229 officially had been listed as received as of Election Day. The state department's dashboard shows a total of 2,612,241 mail-in ballots cast, including those that have come in within the timeframe of the 5 p.m. deadline on Nov. 16.