The results in several states remain too close to call 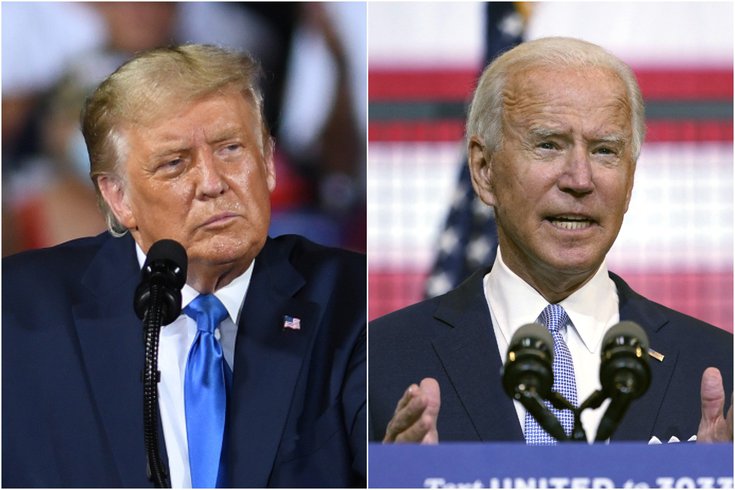 With several battleground states too close to call, Joe Biden has several more paths than Donald Trump toward victory in the 2020 presidential election.

The race has not been called by the Associated Press.

Biden also took the lead in Georgia earlier Friday morning, where he surpassed Trump by more than 1,100 votes coming from mail-in ballots.

The vote count for the 2020 election between President Donald Trump and Democratic challenger Joe Biden enters Thursday with at least four battleground states too close to call.

Biden is sitting just six electoral votes from capturing the White House, according to the Associated Press. That tally awards Arizona's 11 electoral votes to Biden, though only some media outlets have called Arizona.

Biden took two significant steps toward victory Wednesday when he captured Wisconsin and Michigan, two states which the GOP incumbent won during the 2016 election.

The former vice president has 264 electoral votes with Pennsylvania, Georgia, North Carolina and Nevada still undecided. Trump has 214 votes, but is heavily favored to win Alaska's three votes, too. The winner must reach 270.

Biden has several more paths than Trump, who needs to sweep the remaining states unless Arizona was incorrectly called by the AP. Biden only needs one more battleground state to fall his way.

Winning Nevada would give Biden exactly 270 votes and make his lead insurmountable. Winning Pennsylvania – the biggest prize remaining – easily would push him past the threshold.

At one point, Trump’s lead had exceeded 600,000 votes, but it has continued to narrow as more mail-in ballots are tallied.

On Wednesday, the Trump campaign falsely declared victory in Pennsylvania, and Trump himself "claimed" the commonwealth.

However, thousands of mail-in ballots — which are expected to favor Biden — still have to be counted.

Trump campaign officials told reporters on Thursday that they "still have confidence in Pennsylvania" and are expecting to defeat Biden by more than 200,000 votes.

The state is in the process of counting more than 2.5 million mail-in ballots, and had reported counting about 2,031,074 as of Thursday afternoon. About 581,000 remain to be counted.

In Allegheny County, 29,000 ballots cannot be counted until Friday, as a result of an agreement reached by all parties related to a legal challenge brought by the Trump campaign. These votes will be set aside until the state's Nov. 6 deadline on Friday for mail-in votes.

In Georgia, where Trump had held a sizable lead, Biden has climbed to within a point of the president, narrowing his deficit to about 22,000 votes.

Biden currently leads in Nevada by a one-point margin and has drawn closer to Trump in North Carolina, where the president holds a one-point edge.

In Arizona, Biden is up by two points with 88% of the expected vote counted. Trump has reduced the gap between him and Biden, though both the AP and Fox News have backed away from projecting Biden the winner.

Biden sounded optimistic while addressing supporters in Wilmington, Delaware on Wednesday, predicting he would win the presidency. He urged the American public to remain patient while an unprecedented number of mail-in ballots were counted.

Meanwhile, the Trump campaign has indicated it will request a recount in Wisconsin and has sued Pennsylvania, Georgia and Michigan over their respective vote counts.