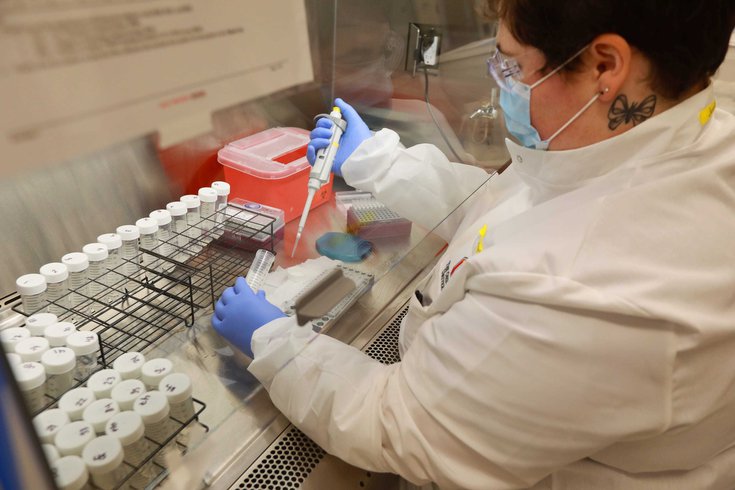 A new study suggests the coronavirus is capable of infecting mouth cells, potentially explaining the oral symptoms experienced by some patients. Above, a lab worker tests student saliva samples at Ohio State University.

Scientists have known since last spring that the coronavirus can cause loss of taste and smell, dry mouth and oral lesions, and that it is present in infected people's saliva. But exactly how it invades the mouth hasn't been completely understood.

New research suggests the virus infects epithelial cells in the mouth. These cells line the surfaces of the body including the mouth, blood vessels and organs. They are often the first barrier against infection.

The infected mouth cells may be one way the virus is capable of spreading to other parts of the body, like the lungs or digestive system, according to scientists at the National Institutes of Health and the University of North Carolina.

The conduit? Saliva laden with the virus.

The virus's presence in saliva may emanate from nasal drainage or from sputum, the mucus produced by infected lungs. But that only explains its presence in people with respiratory symptoms. For asymptomatic people, it must come from somewhere else.

"Based on data from our laboratories, we suspected at least some of the virus in saliva could be coming from infected tissues in the mouth itself," said researcher Blake Warner, chief of the salivary disorders unit at the U.S. National Institute of Dental and Craniofacial Research.

Saliva-based COVID-19 tests have been found to be almost as accurate as deep nasal swabs because of the large concentrations of the virus found in saliva. But it wasn't until this study that scientists had a possible explanation for how the virus got there.

The researchers studied NIH-collected samples from COVID-19 patients who had died. Viral RNA was present in slightly more than half of the samples. Sequencing of the viral RNA suggested the cells were actively making new copies of the virus.

The researchers then analyzed oral tissue samples from volunteers who had mild or asymptomatic infections, finding infected mouth cells in saliva. In 27 of the 35 volunteers who experienced symptoms, those with virus in their saliva were more likely to report loss of taste and smell.

This suggests that the mouth may play a bigger role in coronavirus infections than previously thought.

"When infected saliva is swallowed or tiny particles of it are inhaled, we think it can potentially transmit SARS-CoV-2 further into our throats, our lungs or even our guts," study co-leader Kevin Byrd said.

Byrd is a research scholar at the American Dental Association Science and Research Institute, but at the time of the study he was an assistant professor at UNC's dentistry school.

The researchers hope to use their study to find better ways to reduce transmission and treat oral symptoms of COVID-19.

Since this was a small study, Warner and Byrd said more research is needed to confirm their findings in larger populations. The study was published in the journal Nature Medicine.