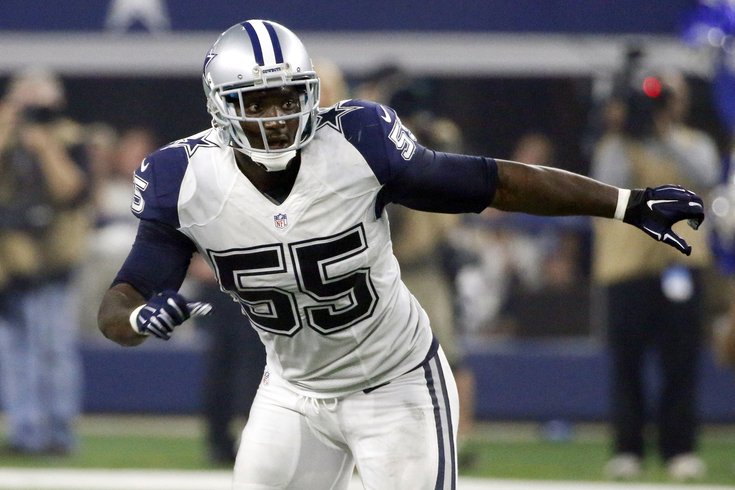 It's been a bad two days for the Dallas Cowboys' already crappy defense.

To begin, Ed Werder of ESPN reported that rookie second round pick Jaylon Smith has not yet had any significant healing in his knee, and that he'll likely miss the entire season.

Smith missing the season was already expected, however, the notion that his knee has not improved much in the two months since the Cowboys drafted him has to come as something of a disappointment.

Former NFL head team doctor David Chao wrote about Smith's injury prior to the draft, and even sort of called the Cowboys drafting him.

This is the tragedy of this draft. I worried about nerve injury as soon as I saw the unfortunate New Year’s Day injury. When I later saw video of Smith wearing the ankle foot orthosis (AFO) that indicated a peroneal nerve palsy existed, I predicted a “medical redshirt” year for 2016 and a tumble from top pick to a Day 3 late round flyer before his Combine medical exam. His injury is much more than an ACL tear. It also includes his lateral collateral ligament (LCL) and the posterolateral corner (PLC), which is confirmed for the first time by recent comments from his surgeon indicating “all the structures on the lateral side of his knee” were damaged. Even without the foot drop issue, this is a daunting recovery. To my knowledge, no NFL linebacker has ever played wearing an AFO. Is Smith talented enough to beat the odds and do so? Maybe, but that doesn’t mean he would still be the “generational” linebacker that he was projected to be. While it is possible the nerve could wake up, it would be beating the odds to think there would be 100% recovery. Smith has longer odds than Marcus Lattimore (not reported to have a nerve issue) who retired after two years of rehabilitation with the 49ers and never played a down. I give Smith a lot of credit for working hard and having a great attitude. The workout videos, while impressive, still show the affects of the foot drop on the left side. The use of the bungee cord dampens explosiveness and helps hide the nerve palsy, but it is still evident. I hope I am wrong and Smith beats the odds to return. He has an excellent surgeon who is optimistic of a full recovery. His doctor also happens to be the Cowboys head team physician. We will see if this gives Dallas enough confidence to select Smith before Day Three.

Next, the Cowboys lost Rolando McClain to a 10-game suspension, per Adam Schefter and Todd Archer of ESPN:

Cowboys' LB Rolando McClain will be suspended the first 10 games for violating the NFL’s substance abuse policy, per @toddarcher and me.

McClain has been in trouble repeatedly throughout his NFL career. He was also suspended for the first four games of the season in 2015 for violating the league's substance abuse policy.

And finally, it was reported today that DeMarcus Lawrence's four-game suspension appeal was denied by the NFL, again per Schefter and Archer:

The Cowboys will also be without DE Randy Gregory, who is suspended for the first four games of the season for violating the league's substance abuse policy.

This is on a defense, mind you, that struggles stopping the run, tied for the fewest takeaways in NFL history last season with 11, and has a cornerback for a career sack leader.