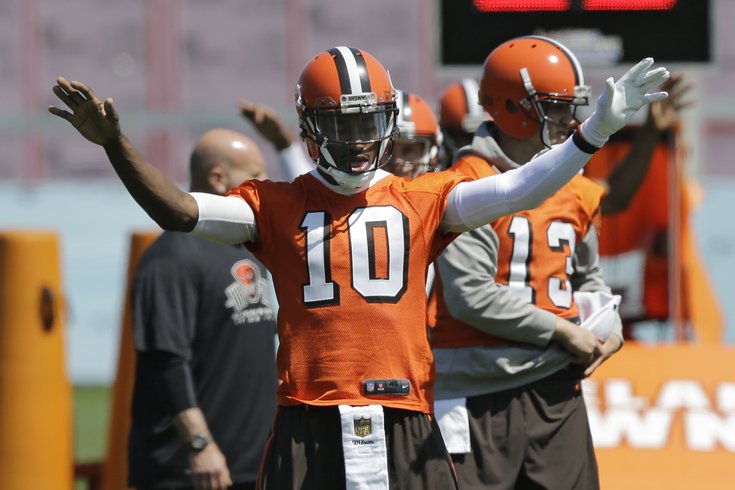 Robert Griffin III was incredible during the 2012 season, when he led the Redskins to an NFC East title and won Offensive Rookie of the Year. Then he tore his ACL in the playoffs, and yada yada yada, now he plays for the Browns.

Under the new Doug Pederson regime in Philadelphia, the Eagles did scout team work during OTAs, which is something they didn't do for the last three years under Chip Kelly.

The Eagles simulated offensive and defensive looks for their NFC East rivals, the Dallas Cowboys, Washington Redskins, and New York Giants. They also did scout team work for their Week 1 opponent, the Cleveland Browns. When the Eagles did their Browns scout team work, the offense they were mimicking looked a lot like Chip Kelly's offense when Michael Vick was the quarterback, with a lot of zone read, packaged plays, and other looks in which the quarterback is a legitimate threat to run.

That would indicate that the Eagles think the Browns' Week 1 quarterback will be Robert Griffin III in favor of the less mobile, soon to be 37-year-old Josh McCown. A number of football sites believe that McCown is atop the Browns' depth chart.

Appearing on CSN Mid-Atlantic, Browns beat writer Mary Kay Cabot said that the Browns are "all in" on Griffin.

"I think the odds are very, very high," said Cabot. "They want him to be the starting quarterback on day one. They’re not going to have a short leash on him at all.

"(Browns head coach) Hugh Jackson and (offensive coordinator / QB coach) Pep Hamilton are all in on RG3. They are trying to do everything they possibly can to coax that 2012 type of season out of him again. They see those flashes of greatness, they love the skill set, the mobility, and all those kinds of things. They think they can coach him up into the kind of player who can not only scramble around and get out of the pocket and make crazy things happen like that, but also to stay within the pocket, read the defense, go through the progression. Hugh really believes in himself and what he’s been able to do with quarterbacks since he’s been in the league and he feels that he can be successful with RG3."

In 2015, the Redskins named Griffin the starter in February, a job he proceeded to lose after a horrendous preseason. Griffin then saw no action whatsoever during the 2015 season. The previous season in 2014, in games Griffin played the majority of the snaps, the Redskins went 1-6. He threw four TD passes on the season, was picked off 6 times, fumbled 9 times and was sacked 33 times.

The Eagles' Week 1 game against the Browns is only one of five games they are favored to win in 2016, per betting odds released by CG Technology.