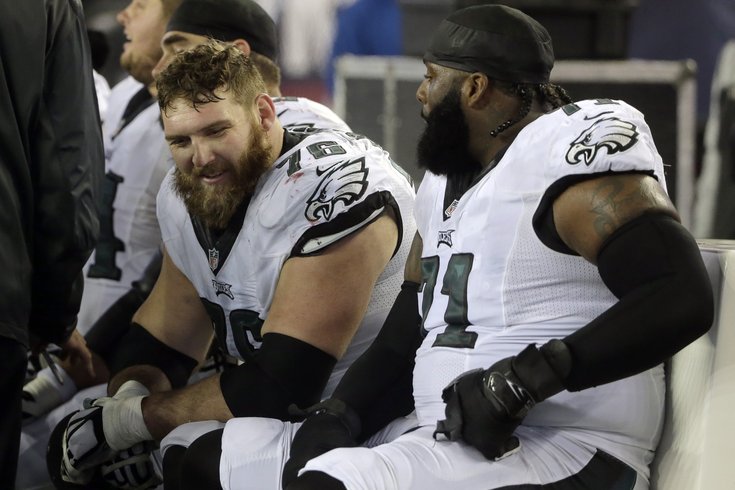 Jason Peters and Allen Barbre discuss how much a gallon of gas used to cost, and how good Werther's Originals are.

All week long we're taking inventory of the Eagles' age at various spots on their roster. Yesterday we took a look at the offensive skill positions, where the Eagles are very young. Today we'll tackle the offensive line.

For the Eagles' starters, we projected the following lineup.

The only real spot that was seemingly up for grabs was LG, although Doug Pederson said that job was Allen Barbre's to lose.

"Right now it is Allen Barbre's job," Pederson said back in May, "and I think again that's something we did through the draft and a little bit of free agency is to kind of shore up that spot. I really like where we're at. I like the depth at that position right now. But yeah, Allen Barbre is my guy and he's our starter."

We'll see if that changes. The Eagles drafted Isaac Seumalo in the third round of the 2016 NFL Draft. He has yet to practice with the full team, as his school (Oregon State) runs on the quarters system, which hurts his immediate chances to start. Still, Pederson said that Seumalo will be working specifically at LG, where Barbre is the only player in any danger of losing his spot. That's a good sign for Seumalo to have a legitimate chance to win that job.

Should Seumalo (22) win the starting LG job, he would lower the Eagles' average age considerably. They would go from an average age 29.2 to 27.2, and would be tied for 22nd with the Bills.

Here is where each of the Eagles' projected starters rank individually at their respective positions:

Obviously, Peters and Barbre bring the Eagles' average age up quite a bit. In fact, there are only 12 projected OL starters in the NFL who are 32 years of age or older, two of whom are on the left side of the Eagles' line:

This offseason the Eagles put some legitimate draft and free agency resources toward the offensive line for the first time since the Eagles drafted Lane Johnson with the No. 4 overall pick in 2013. During the Chip Kelly era, the Eagles did a terrible job reloading with youth and depth, and it bit the Eagles in the ass, as we predicted it would this time last year.

This offseason, the Birds signed Brandon Brooks to a big money deal in March, and they selected Seumalo and OT Halapoulivaati Vaitai in the draft.

While the Eagles are in much better shape heading into this season than they were a year ago, they are far from done reloading along their offensive line, which should remain a major priority in the 2017 NFL Draft.