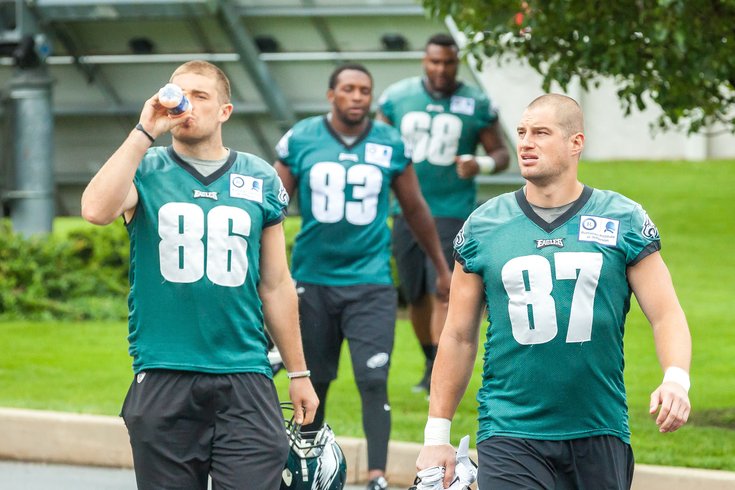 Tight end is probably the hardest of the offensive positions to pinpoint so far in terms of the skill sets Doug Pederson prioritizes.

Over the last three years, the Eagles' media and fan base began to get a good grasp of what Chip Kelly preferred in his draft prospects and free agent acquisitions. For example, at certain positions, there was an emphasis on certain body types or playing styles, like taller defensive ends, bigger, physical corners, and of course, wide receivers who can block.

After one offseason under Doug Pederson, we're starting to get a better sense of what traits he prefers at each position on offense. Certainly, Howie Roseman was doing the specific grocery picking, but it feels fairly clear to me that Pederson had a lot of influence on the types of prospects at each position he coveted.

At the Senior Bowl back in January, Pederson was asked directly about Carson Wentz, long before the Eagles picked him at the end of April.

"He's got great size, good mobility, strong kid, good arm," said Pederson. "It'll be interesting to actually sit down and talk with him, see where he's at mentally, but by the eye, he's a talented kid who can play in this league."

Obviously, any coach is going to want their quarterback to possess the physical traits Pederson noted, but Pederson hinted strongly at the intangibles.

Speaking at the NFL Combine, Pederson was asked what he values in a quarterback. This time, he focused on the intangibles.

“I think this is a talented group [of QB prospects]," Pederson said. "I think it’s a group that is – we all know what they can do on a football field, and that goes without saying. I think for a lot of us, and for most of the teams here that are looking for quarterbacks and obviously this one, it’s how can they come into your organization.

Wentz's physical traits are obvious, and he has already gained respect and praise publicly from a number of his veteran teammates.

From a style of play perspective, Pederson liked that Wentz is aggressive and unafraid to take shots down the field. After the draft, Pederson was asked who Wentz reminded him of.

"A little bit of Brett Favre, honestly," Pederson said. "He's got that mentality. He's got that aggressiveness that Brett had. Those are some of the skill sets that I see in Carson – that aggression, that ability to throw the ball down the field. I love quarterbacks that are willing to take a chance, take a calculated risk down the field. Favre was that way. I see a lot of the same characteristics in Carson."

It seemed like a good bet even prior to the draft that Pederson would value running backs who are weapons in the passing game, considering the success he has experienced with Brian Westbrook in Philadelphia and Jamaal Charles in Kansas City.

Speaking about Darren Sproles, Pederson said the Eagles want to be able to create mismatches against opposing defenses with their running backs.

"If you go back and just look at what we did in Kansas City with our running backs with Jamaal before he got hurt and then with the two guys after the injury [Chiefs RBs Spencer Ware and Charcandrick West], we like to move our running backs around. Sproles is a guy that creates matchups on defense, or against the defense, and we're going to move him around. We are not necessarily going to keep him in the backfield."

Additionally, Pederson has noted repeatedly that rookie fifth-round pick Wendell Smallwood was an attractive prospect to the Eagles because they liked the way he catches the football.

Speed. While the Eagles didn't draft a wide receiver this year, they signed a pair of wide receivers known for having jets, like Chris Givens and T.J. Graham. While Givens and Graham certainly haven't been world beaters as overall players, their best attribute is speed. The Eagles also took a hard look at speed receivers during the pre-draft process, when they brought in a number of burners among their 30 allotted pre-draft visits.

The Eagles are set at tight end, and probably will be for quite some time. Zach Ertz's strength is as a receiver, which exceeds his ability as an in-line blocker. Ertz just received a lucrative contract extension. Meanwhile, Brent Celek is more of a blocker than a downfield receiving threat at this stage of his career, and he took a little bit of a pay cut, although certainly age was a factor.

"I think that the tight end group is one of our strong suits on offense right now," said Pederson at the latest minicamp. "Celek is the leader of that group, obviously, with his expertise. He kind of fits in that Jason Peters mold a little bit. He's a guy you want to definitely get to game day and be smart with him physically and all that. Zach Ertz is a guy that – what a talent. He's learning how to block on the line of scrimmage. He's getting stronger there. He's understanding his role, how to run routes, detail routes and things of that nature.

"Trey [Burton] is a tremendous athlete and I think is a guy that we can move around a little bit offensively and create some matchups there. And then Chris [Pantale] is there. Chris is there and he's a guy that is learning really a duel role. He's a little bit of fullback, he's a little bit of tight end, but he's been a pleasant surprise this offseason and I really look forward to camp and putting the pads on with all of those guys to really see where they are at physically."

There's nothing too revealing there, but perhaps the general statement that we can probably make about Pederson and tight ends is that he likes them.

Versatility. Pederson made it very clear during the pre-draft process that he values offensive linemen who can play multiple positions.

"You love offensive linemen that are versatile," explained Pederson. "You love to have tackles that can play left or right. You love to have guards that can also play center. The more you can have that flexibility with your guys up front, the more combinations and rotations you can have because not everyone is going to stay healthy for 16 games and you have to mix and match that. Guys that are athletic who can get out on the perimeter and run, aggressive up front, have a little, as they say, 'piss and vinegar' in their neck are guys that you look for. I think we have a good nucleus of that."

The Eagles backed up Pederson's words when they drafted Isaac Seumalo in the third round of the draft. Seumalo is a rare player who can play all five positions along the offensive line. The Eagles' fifth-round pick, OT Halapoulivaati Vaitai, started at right tackle in 2014 and left tackle in 2015 for TCU. The Eagles also brought in the versatile Stefen Wisniewski in free agency. Wisniewski has started both at guard and center during his time with the Jaguars and Raiders.