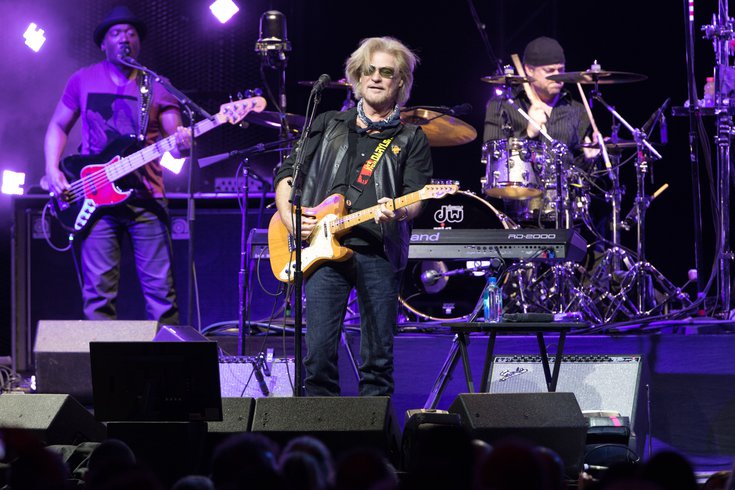 Daryl Hall's 40-plus-year solo music career will be celebrated this April with the release of his first retrospective album and an eight-city tour featuring Todd Rundgren.

"BeforeAfter" will debut April 1 as a two-disc collection of Hall's greatest hits from his five solo albums and never-before-released recordings from the musician's "Live from Daryl's House" series that began in 2007. The album is now available for pre-order through Legacy Recordings.

The 30-song compilation album will consist of songs spanning from Hall's debut solo album, "Sacred Songs," in 1980 to his most-recent solo project, "Laughing Down Crying," in 2011.

Among the notable songs that will be featured include "Dreamtime" from Hall's 1986 album "Three Hearts in the Happy Ending Machine" and "I'm in a Philly Mood" from the singer-songwriter's 1993 record "Soul Alone." "Dreamtime" peaked at No. 5 on the Billboard Hot 100 charts in 1986.

"I picked this collection of songs from my solo albums because I feel they encapsulate certain periods of my career," Hall said.

The anthology will also include performances with Rundgren and Dave Stewart that originally debuted on Hall's web series. Hall and Rundgren's rendition of the latter's "Can We Still Be Friends" was released as the forthcoming album's lead single.

Stewart, who may be best known as one-half of the British pop duo Eurythmics, co-produced Hall's "Three Hearts in the Happy Ending Machine" album. Hall and Stewart's cover of the Eurythmics' hit song "Here Comes The Rain Again" from the former's web series will be featured on the new album too.

The album's debut will be accompanied by an eight-show tour over the first two weeks in April. It will be the first solo tour for Hall in a decade.

Hall and Rundgren's tour will be highlighted by a hometown performance April 9 at The Met Philadelphia. Hall said in an interview with NBC last year that performing in Philly is his favorite thing to do.

"There's nothing that beats a Philadelphia audience," Hall said. "Everybody's your cousin or thinks they are or act like they are, and it's fantastic."

Hall and Rundgren, two natives of the Philly region who now call themselves Rock and Roll Hall of Famers, have collaborated together for close to 50 years. Rundgren produced Hall and Oates' third album, "War Babies," in 1974 and performed on the record.

“I’ve known Todd since we were kids,” Hall told Variety. “We have what I consider ultimate respect for each other. I think he’s a phenomenal artist who has carved his own path. Whenever we get together, sparks fly. Something good happens. We sing really well together.”

Hall is coming off a U.S. tour with John Oates that included a stop in Philly for HoagieNation at the Mann Center last August. The musical duo is now under consideration for the National R&B Hall of Fame.