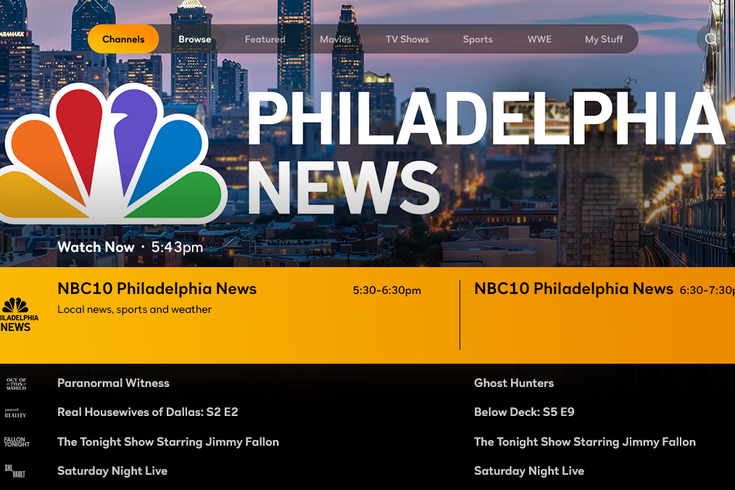 NBCUniversal's streaming service Peacock is adding local news channels to its platform, and Philadelphia is one of the first TV markets included in the initial rollout.

NBC10 is now available to stream nationwide for free on the platform, providing viewers with 24/7 local coverage from the Philly region.

NBC Philadelphia News will feature simulcast and encore news programming, as well as breaking news and original content. The streaming channel will go live when NBC10 airs a new broadcast and show reruns of previous newscasts when there is no live programming.

Viewers will be able to watch the network's local news programs, as well as "Philly Live'' and "NBC10 At Issue." Special programming such as "Race in Philly," the Blue Cross Broad Street Run and Wawa Welcome America will also be available. NBC Sports Philadelphia is not part of the package.

“We’re proud that the new NBC Philadelphia News channel is now available on Peacock so viewers can access NBC10’s coverage from anywhere in the nation, around the clock, for free,” NBC10 and Telemundo62 President and General Manager Ric Harris said. “We are thrilled to be one of the first stations to launch on Peacock. This is a great way to watch our award-winning local news and specials, including breaking news, First Alert Weather, investigative stories, news specials, live events and more.”

🦚 JOIN THE FLOCK!
Starting today, stream NBC Philadelphia News on Peacock TV for free! It's on 24/7, so you can watch our news and weather anytime! Details on how to stream are here: https://t.co/N3mLxBV3n8

Philadelphia is one of four markets of NBC-owned local TV stations participating in the initial rollout. The others are Boston, Chicago and Miami, with New York City and Los Angeles expected to join later this year.

Viewers can access NBC10's streaming channel by going to Peacock's website or downloading the Peacock app to one's phone, tablet or streaming device. Click on the "Channels" tab on the streaming platform's homepage and scroll down to select NBC Philadelphia News.

A cable subscription is not necessary to stream NBC10 on Peacock, and viewers can access local newscasts wherever they may be nationwide.

Peacock's entry-level package is available for free and offers viewers limited commercials and roughly two-thirds of the streaming platform's library.

The streaming service's second-tier plan costs $4.99 per month and opens up Peacock's entire library with limited commercials. Xfinity customers get Peacock Premium for free as part of their cable and internet subscription.

Peacock Premium Plus, the streaming service's third and highest-tier package, costs $9.99 per month with no commercials and unlimited downloads.

NBC10 is the latest local news station in Philly to become available on its parent company's streaming platform. CBS3 is available on Paramount+ to premium subscribers, while 6ABC can be streamed on Hulu's Live TV package.

Last year, NBC10 debuted its first streaming-only newscast called "The Lineup." The daily, digital-only show is hosted by anchors Keith Jones and Erin Coleman and can be streamed at any time on Roku, Apple TV or NBC10's website.