Daryl Morey on board with Sixers' plan, despite never tanking himself

At the end of Daryl Morey’s segment on “The Grantland Basketball Hour,” which is a consistently excellent watch by the way, the outgoing Bill Simmons asked the Houston Rockets general manager a question about his former second-in-command. Actually, it was more of a command than question.

“If I had the starting point he had, I think he made all the right choices,” Morey said. “I think he’s made great moves. Obviously no one else appears to agree at this point, but I think it’ll be proved out over time.”

“I mean just looking at the Rockets and other teams, you say you’ve got to have two great players,” he later added. “Honestly, the draft has been where those come mostly. So he’s not going to pretend until he’s got two great players.”

It’s not very surprising that Morey came to Hinkie’s defense. Even though their public personas are completely different — Morey is open and willing to talk about a lot of subjects while Simmons and Jalen Rose could film 1,000 episodes of that show and still not sniff a chance of booking the Sixers general manager — Morey likes and respects Hinkie after working closely with him for seven years:

Oh yes, for sure. I hope Sam Hinkie gets 2 RT @chris97gent any superstars in this years draft?

Even though there weren’t exactly any unexplored topics in Morey’s comments, a couple of quick discussion starters can be found if you dig a little bit. The one I want to talk about has to do with the phrase, “If I had the starting point he had.” Remember, Morey and Hinkie ran an organization that never rebuilt or tanked in the fashion the Sixers have recently (possibly because of pressure from ownership). They managed to stay competitive after losing Yao Ming and Tracy McGrady while also eventually retooling the roster that you now see playing in the second round of the playoffs.

The first full year that McGrady and Yao weren’t a part of the picture in Houston anymore was 2011-12, when the Rockets went 34-32 in the strike-shortened season. They didn’t have any superstars, but their top seven guys could play: Goran Dragic, Kyle Lowry, Luis Scola, Samuel Dalembert, Chandler Parsons, Kevin Martin, and Courtney Lee. Not great, but world-beaters compared to this: 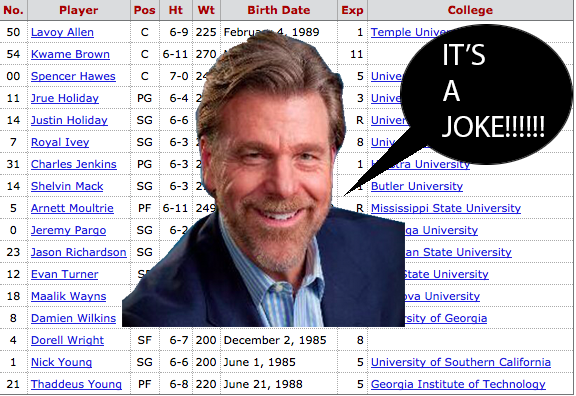 We underestimate how terrible the Sixers roster that Hinkie inherited was. Not only was the talent-level so low, there was hardly any room for improvement. Jrue Holiday was coming off an All-Star appearance in a bad Eastern Conference, but it’s still unclear if he’ll ever be a top-10 point guard. Thad Young is probably best suited as a valuable 6th or 7th man on a true title contender. Spencer Hawes is so far in Doc Rivers’ doghouse that he probably doesn’t even have to shower after these Clippers playoff games.

Trying to build the same way the Rockets did through the middle would’ve been difficult after the Sixers roster was decimated by a bunch of poor decisions* in the summer of 2012. Houston had two point guards in the rotation that have performed much better of late than Holiday, who has admittedly been injured.

*Although to be fair, signing Swaggy P was the greatest poor decision they could’ve made as far as I’m concerned.

Speaking of that summer, we know for a fact that Hinkie was against the Bynum trade and most of the other moves the Sixers made. From Pablo Torre’s February feature on the team:

[Josh] Harris and [David] Blitzer believed they were clearing the decks for a top-10, 96th-percentile-type player. But Hinkie, surveying payroll, delicately submitted that not only had they overvalued Bynum, but their 35-31 team might actually have been made worse.

Harris and Blitzer pulled the trigger on the trade and it blew up in their faces in a bowling-induced haze. A year later, they hired Hinkie and here we are today. I’ve had many conversations with fans on board with “The Plan” that contend, in a weird way, the Bynum trade might be looked back on as the most important move in franchise history. It forced the ownership group to think critically and creatively about attempting to build a title contender in a much different fashion.

What I’m left wondering is what happens in the alternate universe where Hinkie lands the job in 2012. Does he try to build through the middle with Andre Iguodala and Lou Williams in the fold? Does he dismantle the team a year early? Does everything play out the same exact way? Are the Sixers in the playoffs right now?

We may never know. But hey, at least Dork Elvis is on board with the way things shook out.