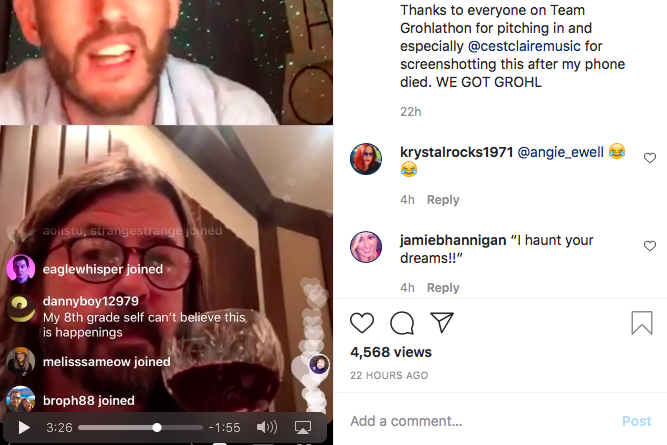 Dave Grohl had a chat and played some music on Instagram Live last weekend with Pat Finnerty, a West Philadelphia resident who campaigned to get the rocker to make a guest appearance.

A Philadelphia man's improbable campaign to invite Nirvana and Foo Fighters legend Dave Grohl onto an Instagram Live show ended in success over the weekend, with a jam and a fun conversation.

Pat Finnerty had been on a mission for several months to score an appearance on his new Instagram show, which he launched in response to losing his job during the coronavirus pandemic, Rolling Stone reported on Monday.

We got Rolling Stone. Don’t make me say Grohling Stone.

During the 2020 quarantine, Finnerty and his band, the Full Band, have been playing impromptu shows for neighbors from the roof of a West Philly row home. They even played a set on top of Johnny Brenda's in Fishtown.

At some point during this experiment, Finnerty had the crazy idea to entice Dave Grohl into singing the lyrics of Dire Straits' "Money for Nothing," specifically the line, "I want my MTV." In a perfect world, Grohl would have been flown in by helicopter and lowered onto a roof mid-performance, but Finnerty was prepared to take what he could get.

The 40-year-old musician even imported a cardboard cutout of Grohl from England to help drive publicity for his quest. The cutout joined Finnerty's band on top of Johnny Brenda's and appeared in various locations around the city over the weekend.

Around 10:30 p.m. on Saturday night, the so-called "Grohl-a-Thon" came to a triumphant conclusion when Finnerty received a video request from a dinner guest who was at Grohl's house. A grassroots network of loose contacts had eventually funneled Finnerty's request to Grohl himself.

After nine straight hours of wishful buildup on Instagram Live, suddenly there was Grohl on The Pat Finnerty Show.

"What the f*** are you guys doing?" Grohl said from his home, where he sipped from a glass of red wine.

Thanks to everyone on Team Grohlathon for pitching in and especially @cestclairemusic for screenshotting this after my phone died. WE GOT GROHL

The conversation spans about 15 minutes over two Instagram Live videos, and includes Grohl reminiscing about playing the former Legendary Dobbs in South Philly during the 1980s.

We got Grohl. Thanks Grohl.

Despite the oddity of the Grohl-a-Thon, the Foo Fighters front man said he still pinches himself every morning and feels lucky that he's been able to have such a far-reaching impact.

"When I hear about stuff like this happening, it's really weird and surreal for me, but ultimately, it's really flattering and it makes me really happy that I get to share my music with a lot of people," Grohl said.