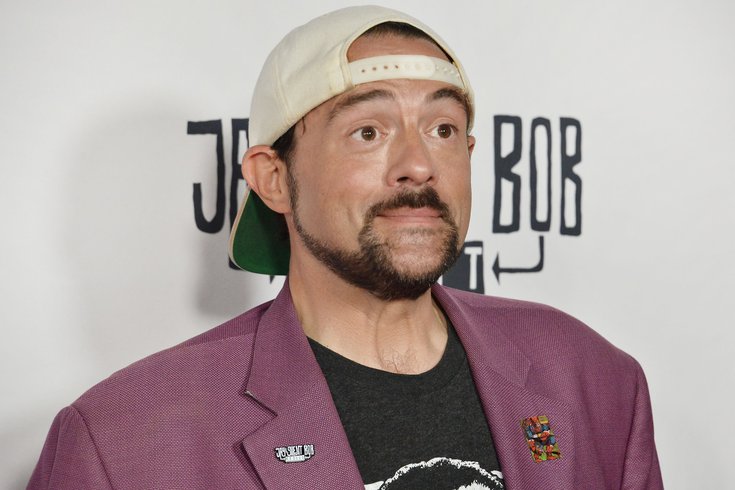 Kevin Smith is opening a Mooby's in Red Bank, Monmouth County. The pop-up based on the fictional burger joint will open in mid-September, the director said.

The Mooby’s pop-up will open in Red Bank in mid-September, Smith announced Monday. There, diners will be able to score beef and vegan "Cow Tipper" burgers, "Hater Totz," and "King of the Juice" lemonade, among other menu items with names referencing Smith's movies.

MOOBY IS NOW A JERSEY COW! After an udderly wonderful run in #losangeles, the @moobyspopup is moooooving across the country to my motherland of RED BANK, NEW JERSEY for a mid-September grand opening! Details on which restaurant in town is getting temporarily bovine-sized will be forthcoming - but within a month, East Coasters can get their Cow Tipper on (in Vegan and non-Vegan versions), binge Hater Totz, swallow a Cock-Smoker chicken sandwich and wash it down with a King of the Juice! The fine folks of @jayandsilentbobstash will be operating a satellite store at Mooby’s too, featuring new merch and shirts celebrating Mooby’s Red Bank, 2020. And since I can’t miss the debut of my fake fast food eatery in the real town I was born... I’M COMING HOME to be there when the doors of Mooby’s swing wide (and maybe do a show or two)! Many thanks to @heyitsderekberry (who’s reopening his @savedbythemax in Chicago for a week) for all the work and fun in making Mooby’s happen - not only out here in #weho, but now mere miles from @quickstopgroceries! I’ll have ALL the info next week when we reveal Red Bank’s amazing eatery that reached out to us about hosting a momentary Mooby’s! Until then, go to MoobysPopUp dot com (link in my bio) to sign up for the Jersey mailing list and start getting in the moo’d for Mooby’s IRL! (Awesome Art of Parkway Mooby by @thedarknatereturns!) #KevinSmith #moobys #moobyspopup #newjersey #redbanknj #redbank #food #jayandsilentbobreboot #clerks2 #jayandsilentbob

The restaurant is modeled after the fictional fast food chain that has long been part of the Highlands native's View Askew cinema universe, including the "Jay and Silent Bob" franchise. The golden-calf mascot first appeared in the director's 1999 film, "Dogma."

The pop-up, which is masterminded by Derek Berry, wrapped a successful run in Los Angeles earlier this month. The L.A. shop featured a wide range of options, including a vegan lasagna sandwich, vegan “Egga Mooby” muffin, and chocolate covered pretzels. Alcoholic drinks, like spiked Capri Suns and Mooby's IPA, also were on the menu. Smith did not elaborate if the same options would be available at the Red Bank location.

The Jay and Silent Bob Secret Stash comic book store, which is owned by Smith, also will operate a satellite store during the pop-up's duration. Additionally, Smith announced plans to come home for the pop-up's grand opening. He even teased the possibility of performing "a show or two" while he's in New Jersey.

The brick-and-mortar address that will host the pop-up will be announced next week, Smith said.