Delaware County to revamp its 911 system with $4.6 million in state assistance 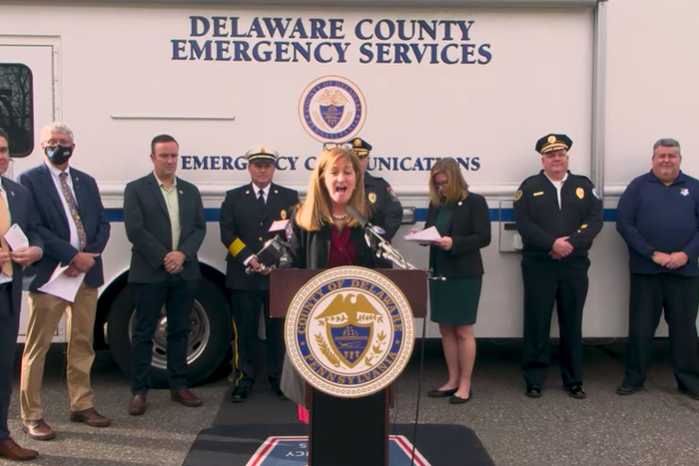 Delaware County recently received $4.6 million in grant funding through the Pennsylvania Redevelopment Capital Program to rehabilitate and revamp its aging 911 system, which has been plagued by infrastructure and technology issues. The investment is part of a bipartisan effort by every member of Delaware County's delegation to support its residents.

Delaware County is among dozens of recipients of grant funding from Pennsylvania's Redevelopment Assistance Capital Program, which provides infrastructure support to organizations and municipal governments across the state. The county received $4.6 million in December to improve its aging 911 system.

Delco's emergency response system serves over 560,000 people throughout the county 24/7, and leaders admitted during a December press conference that the program has been plagued with infrastructure issues that will be remedied by these additional funding efforts.

The improvements include "24 tower upgrades to provide acceptable county-wide communication coverage, shelter structures, ice bridge, grounding, electric, HVAC core work additions and 911 center equipment to communicate effectively in emergency situations with citizens and first responders, as well as with surrounding counties in Southeastern Pennsylvania," according to the request for funding made by Delco officials beginning this past summer.

"In 2020, Delaware County's 911 center received almost 600,000 calls," said Elaine Schaefer, a Delco Councilmember. She notes that each day, the county's first responders take calls, dispatch, and report all manners of emergency. "Delaware County's emergency communications system is a busy one."

Schaefer notes that receiving this funding was an effort made by every member of Delaware County's delegation, on both sides of the political aisle, in order to support a much-needed infrastructure initiative.

"[Delco's 911 system] does, however, have serious infrastructure, technology, and security deficiencies, and it is long overdue for modernization," Schaefer said.

He applauded the bipartisan effort by every elected official in Delaware County to secure these funds for the 911 system, adding that those additional dollars are "desperately needed" to improve the ongoing infrastructure issues the county is facing.

He stressed the importance of this infrastructure funding as a method to increase Delaware County's workforce and "bring jobs back" to the community as these major changes are implemented.

"You expect that 911 call to be answered by someone who cares," Boyce said. "This will allow them to do a better job."

Delco's aging 911 Communications System is getting a much-needed upgrade thanks to the entire Delco legislative delegation.

A $4.5 million RACP grant has been awarded to @DelcoCouncil to help.

Getting this project funded is a testament to bipartisan collaboration & teamwork. pic.twitter.com/6CvvfSa2A2

Senator Tim Kearney, who represents Delaware and Chester Counties, spoke alongside Delco officials and other lawmakers on the importance of bipartisanship and infrastructure investments that have support from Harrisburg.

"Getting this project funded is a testament to effective bipartisan collaboration and teamwork," Sen. Kearney said. "While there was no blueprint to follow, we had to figure it out because knew Delco was at risk, including the first responders, given the ongoing failings of the current 911 system."

This $4.6 million in funding is made in addition to a previous $1.5 million grant previously awarded to Delaware County to use as part of the rehabilitation effort of its 911 system.