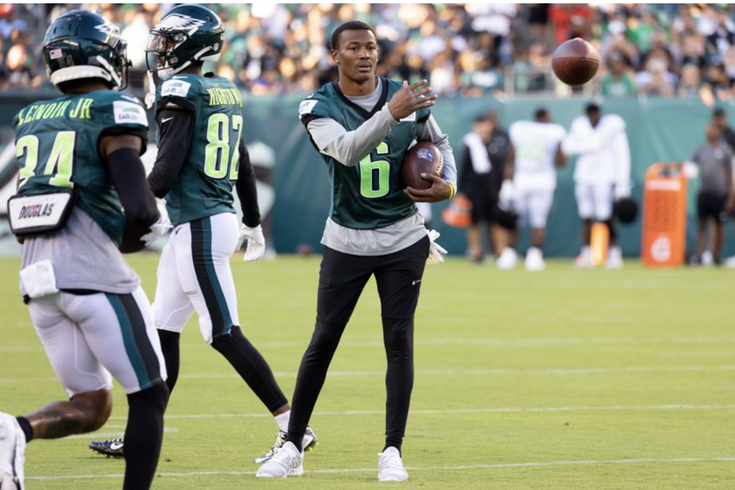 Philadelphia Eagles second-year wide receiver DeVonta Smith is releasing three limited pairs of sneakers in collaboration with upstart brand Endscape. The purchase of the sneakers comes with an NFT, which allows the owner access to exclusive events hosted by Smith

Philadelphia Eagles second-year wide receiver DeVonta Smith is setting his eyes on the future for his upcoming collaboration with a pioneering sneaker brand from Massachusetts.

Endstate has partnered with the NFL player to release a signature pair of shoes that will come with a non-fungible token. The NFT will be released first sometime this month and the sneakers will be shipped in December, the Philadelphia Business Journal reported.

The shoes will be available in three colorways – kelly green, black and gold, and blue and pink. Each pair will have a near-field communication chip embedded in the tongue, which uses an encoding process to link to the virtual NFT.

My collab with @Endstate will change the game. It’s MORE than a pair of limited edition sneakers. You get a pair of my premium, signature sneakers PLUS exclusive event access, next-level game-day perks, and bonus products & memorabilia. How? 👇 pic.twitter.com/7ZsAIqJGK8

“As a two-time National Champion and Heisman Trophy winner, first-round NFL draft pick, and standout wide receiver for the Eagles, DeVonta’s on-field resume speaks for itself, but we’re equally as impressed with who he is off the field,” Bennett Collen, CEO and co-founder of Endstate, said in a statement. “We’re excited to work with DeVonta to design a sneaker that embodies what makes him special — generational talent, hard work, high character, and impeccable style.”

Collen founded Endstate in 2021 with Stephanie Howard, a sneaker company veteran who spent over 25 years working at New Balance, Nike and Reebok. She has created a number of popular shoe designs, including the New Balance 850, the Nike Air Max Verona and the Reebok DMX6 Trail.

Howard told Highsnobiety that the idea for the company was created after Collen, a professor of business applications at Boston College, reached out to her after hearing her speak during a webinar. Collen believed that NFTs could provide a way for creators and athletes to collaborate in the sneaker market.

The collaboration with Smith will allow fans to connect with him on a deeper level as he continues to excel on and off the field, Howard told HypeBae.

"We take some of the storylines that are told around him and his aura, and we build the product with him," she said. "Those fine little details help fans discover the story of who he is."

The NFT market gained in popularity over the past couple of years but peaked at an estimated $40 million in 2021. However, as of May, sales have began to flatline, the Wall Street Journal reported. Endstate is taking a different approach by combing tangible items with physical products.

"Instead of thinking about it only as an NFT, sneaker, or physical product with a digital twin, the most exciting part about it, is this unprecedented connection we are creating," Howard told HypeBae. "That's why we are choosing to do most of what we create in the world of collaborations."