Insulin costs have more than tripled in the last decade 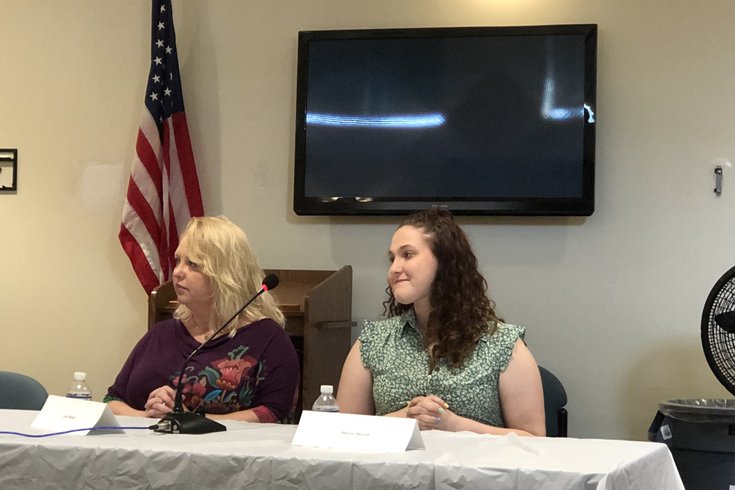 Lisa Shiroff and her daughter, Hayley, who has Type 1 diabetes, share the financial burden that the disease places on their family. Since Hayley was diagnosed in 2013, the family has met their health insurance deductible every year.

Morgan Shiroff had just turned 12 years old when her family found her passed out in the bathtub.

She didn't have mononucleosis, as her family thought, but Type 1 diabetes, a diagnosis made after she was airlifted from Virtua Hospital to the Children's Hospital of Philadelphia, where she spent four days in the intensive care unit.

Ever since, Shiroff – now 18 – has relied on daily insulin to keep her alive.

"I woke up in CHOP," Shiroff said. "I was in the ICU. My aunt, who was a nurse, was giving me a shot in the leg. I immediately started balling because needles – I don't do it."

Morgan and her mother, Lisa, shared the story Wednesday as part of a diabetes forum hosted by U.S. Rep. Donald Norcross at William Rohrer Memorial Library in South Jersey's Haddon Township. Their story showcased the life-threatening power of the disease and the burdens that accompany it – including the rising cost of medications that keep it at bay.

"We have to fix the costs of prescription drugs," Norcross said. "We're talking specifically about insulin today, because we're hearing (1.25) million have to do insulin each and every day. The idea that, in this country, with the greatest wealth and the greatest research, we're paying greatest amount of money. That's simply unacceptable."

And that's having a deadly effect, Norcross noted.

He pointed to the story of Josh Wilkerson, a 27-year-old Virginian man who fell into a diabetic coma and died earlier this month. Wilkerson could not afford the prescription insulin he needed and had switched to an over-the-counter product.

Norcross said there is no "silver bullet" that will quickly fix the pricing. But he wants to see greater negotiations by insurers, more transparency from drug companies and a path for viable generic drugs.

"When you pick up birth control pills, they're free, because it's a preventative. But insulin is not, even though it prevents death. If you're preventing life, it's free, but if it's preventing death, you have to pay for it. There's an irony there." – Lisa Shiroff, mother of daughter with Type 1 diabetes

Type 1 diabetes, a chronic disease in which the pancreas produces little or no insulin, affects about 1.25 million Americans. The disease often is diagnosed during adolescence, prompting a life dependent on insulin medications.

It differs from Type 2 diabetes, a far more common – and largely preventable – condition that only sometimes requires insulin. Oftentimes, people with Type 2 diabetes can control their condition with diet and exercise.

The forum was held just hours after the U.S. Centers for Disease Control and Prevention released an alarming study highlighting the debilitating effect that drug prices have had on diabetes patients.

About 13 percent of adult diabetics do not take their medications as prescribed, the study found. That means they either take smaller dosages, wait to fill prescriptions or skip treatments entirely. Among adults under age 65, that figure jumps to nearly 18 percent.

Additionally, 24.4 percent of adult diabetics have asked their doctors for a lower-cost medication.

The Shiroff family can relate.

At one point, Morgan's father lost his job during a company merger. The family was spending $2,700 each month for COBRA insurance, all while still needing to meet an $8,000 deductible before insurance would pick up more of Morgan's insulin costs, Lisa Shiroff said.

COBRA also substituted the Humalog insulin that Morgan had been taking for another form, one that Morgan said did not work nearly as well. So, Lisa Shiroff took to buying Humalog from a place in Canada. At $34 a bottle, it was far cheaper.

Still, there hasn't been a year gone by without the family hitting its deductible, no matter the insurance. This year, Lisa said they hit the $6,000 deductible by the end of May. At that point, they still pay percentages of the costs.

"When you pick up birth control pills, they're free, because it's a preventative," Lisa Shiroff said. "But insulin is not, even though it prevents death. If you're preventing life, it's free, but if it's preventing death, you have to pay for it. There's an irony there."

Shiroff wants more transparency from the three drug companies that produce most of the insulin products – Sanofi, Eli Lilly and Novo Nordisk. And she wants to know why generic products are not available.

STRUGGLING TO MEET THE COSTS

The Shiroff family was just one of several families and individuals at Wednesday's forum sharing myriad challenges presented by Type 1 diabetes. All had insurance and expressed gratitude that they weren't stuck covering the costs on their own.

The increasing drug costs hit diabetics without health insurance particularly hard. Among adult diabetics under age 65 without insurance, 35.7 percent do not take their medications as prescribed, according to the CDC study.

But many with insurance also are struggling to meet the costs. The CDC found that 14 percent of non-elderly adult diabetics with private insurance and nearly 17 percent of those with Medicaid do not take their medications as prescribed.

It has never come to that for Stephen Noon, a 32-year-old accountant who was diagnosed with Type 1 diabetes as a college freshman. But every year, he and his wife examine their various health insurance options to determine the most cost-effective choice.

Noon said he can't help wondering where else he could be putting the money spent on diabetes medications. It could go to house repairs, his daughter's college fund or his own retirement savings. Instead, it pays to keep him alive.

From a policy standpoint, he wants to see insulin become more affordable so that people who do not have insurance – or don't have as good insurance as others – can receive the medications they need at a reasonable price.

"Insulin, it's a necessity to live for Type 1 diabetics," Noon said. "It's not something that we like to have because it makes us feel a little bit better. It keeps us alive."