Dine-out for Thanksgiving, 10 restaurants that'll do the cooking for you

Escape the kitchen for the holiday 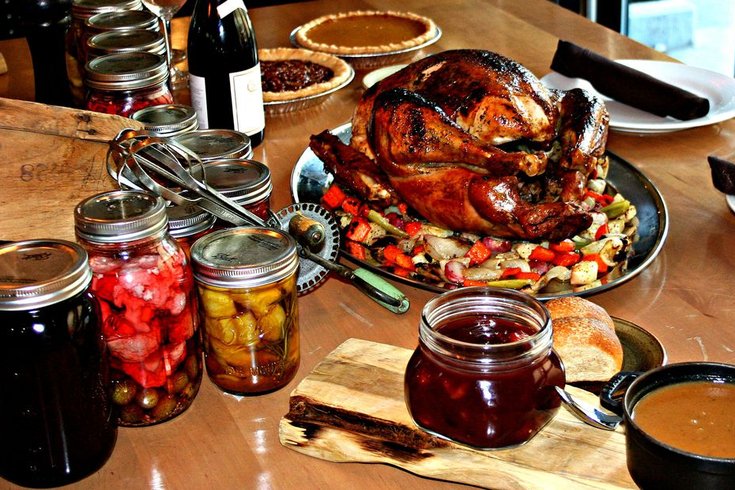 Thanksgiving is next week and you’ve decided that you’re not going to cook this year.

You’re over it. You’ve had it.

But that turkey doesn’t roast itself and you’re certainly not doing it. Well, we’ve got some good news - there’s still a number of places accepting reservations in the city (and suburbs) to serve all your family needs.

So sit back, relax, have a glass of wine, and let someone else do the cooking for a change. Who wants to worry about their mother-in-law thinking their turkey is 'dry' anyway?

From 12 p.m.- 8 p.m., The Bercy in Ardmore will serve a three-course menu for $55 a guest. (À la carte options will also available.) Turkey trays for kids are $15. The first course will include a choice of pumpkin soup, beet salad or mac au gratin. The second course will have a meat option with either turkey, braised beef short rib, or Pocono trout amandine. The third course will feature a choice of apple or pumpkin pie, or chocolate tart.

Davio’s Northern Italian Steakhouse in King of Prussia and Philadelphia will feature a special Thanksgiving menu from 11 a.m. to 8 p.m. The menu is $65 per person and $23 per child, 12 years and younger. The dinner includes turkey, creamy potatoes, green beans, yams, roasted root vegetables, savory brioche stuffing, gravy, and cranberry ginger chutney. There will also be an à la carte menu available.

Chez Ben will feature a special Thanksgiving menu from 2 p.m. to 10 p.m. for $39 a person or $59 a person with wine. The menu features a choice of butternut squash soup or mixed green salad for the first course, and a traditional turkey dinner with mashed potatoes, candied sweet potatoes, and green beans for the second course. The third course will feature either a chocolate and bread pudding or a butter pecan tart.

Del Frisco’s Double Eagle Steakhouse will feature a Thanksgiving prix fixe menu for $59 per adult and $24 per child. The first course will include either a butternut squash soup or harvest salad. The entree will include slow roasted turkey breast with an apple-sausage stuffing and sides of potatoes, green beans, pan gravy, and cranberry relish. Dessert is a choice of pumpkin cheesecake or pecan pie à la mode.

Smokin’ Betty’s in Midtown will offer a three course meal for $29.95 an adult, $19.95 a child. (You can also take out for an extra $5. Take-out dinner for six is also available for $179.95. Catering pick up will begin at 11 a.m.) Dinner Service is from 2 p.m. to 8 p.m., and the bar will be open until 10 p.m. The menu will include butternut squash soup, chicken noodle soup, sweet potato gratin, Mac and cheese, turkey, ham, corn bread muffins and even pumpkin and apple pie.

Urban Farmer has select seating available for smaller groups and will be available from 4- 9 p.m. on Thanksgiving. At $75 per person (and half priced for kids under 12), the first course options include blue hubbard, apple bisque, and crispy potato gnocchi. The second course includes either turkey or mushroom crusted prime rib. Sides are served family style with cornbread turkey stuffing, mashed potatoes, and fall squash. The third course will feature a pumpkin pie, pumpkin bourbon cheesecake, or a chocolate pecan tart.

Founding Farmers in King of Prussia is serving a special menu for $39 per person, $20 for children 12 and under. The first course comes with the option of butternut squash soup or Italian Sunday salad. The main course has seven different options from roasted turkey, fried chicken and prime rib. Sides will include classics such as mashed potatoes, sweet potatoes, and cornbread stuffing. Dessert will feature different five options to pick from, including pie classics like pumpkin and pecan as well as a pumpkin spice cake donut with ice cream.

Most places are offering three-course prix-fixe menus for Thanksgiving, but if you want something a bit more casual the following restaurants are either serving family-style or buffet.

Bank and Bourbon will feature a Thanksgiving buffet for $65 per adult and $22 per child, 12 and under. The buffet will feature a carving station with prime rib, roasted turkey, and roasted salmon, and appetizers such as a cream of root vegetable soup, aged ham, and local cheeses. Sides include brioche-sage stuffing, gold potatoes, green beans, root vegetables, yams, and cranberry relish. The dessert table includes nine pies - that's a lot of pie - from cranberry pie, sweet potato pie, pecan pie, and even maple-bourbon pie.

CO-OP on 33rd and Chestnut will host a “friendsgiving" from 12 p.m. to 8 p.m. Guests are encouraged to bring three friends and dine a traditional thanksgiving dinner with turkey, stuffing, and cranberries. It comes with a bottle of wine for $100.

Twisted Tail will offer a family-style dinner from 12 p.m. to 10 p.m., $49 per person and $25 per kid, 10 and under. (Kids under three eat for free.) There will be an assortment of sides to choose from as well as an assortment of meats included roasted Lancaster turkey, herb-crusted prime rib, pineapple glazed ham or honey barbecue glazed salmon. Mini versions of pumpkin, apple, and pecan pie will be available for dessert. Reservations are still open, but space is limited.

Don’t let this be you.