Flyers designers reveal Gritty almost had wings and no pants

Final character was chosen among more than 100 options 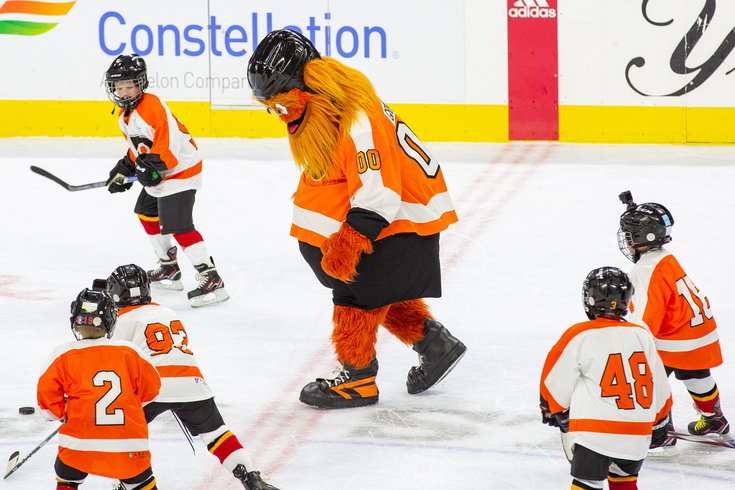 The Philadelphia Flyers mascot, 'Gritty,' scrimmages with the Mites on Ice during a game at the Wells Fargo Center, Nov. 8, 2018.

It's hard to believe almost two months have passed since Gritty entered the hearts of Philadelphians and the world at large.

Terrifying and yet fuzzy, the Flyers mascot created a social media storm and unifying moment unlike anything we've seen from a mascot in years. He become one of Philadelphia's most popular Halloween costumes, inspired a beer, was honored by City Council and appeared on nearly every late night television show in the country.

As perfect as Gritty turned out to be, the team tasked with bringing him to life revealed to AdWeek that several features of the character were either cut out or thrown in at the last minute.

The masterminds behind Gritty are Flyers Chief Operating Officer Shawn Tilger, vice president of marketing Joe Heller, director of marketing Sarah Schwab and Brian Allen of Flyland Designs, who drew the initial sketch that stood out among more than 100 options.

Among the features removed from the final design were a tail, wings, eyebrows and a look that would have left Gritty without any pants.

With the costume built — and delivered just days before his first appearance — the team realized the performer behind the mask was taller than expected, leaving Gritty with what Heller called “flamingo legs.” The solution? Put Gritty in a pair of hockey trousers.

That's a very fortunate thing, or he would have been a giant, orange Mike Wazowski.

Needless to say, Gritty survived the 24-hour backlash after his introduction and became a smash hit. In his first 30 days, he reached nearly 70 million people on TV and landed nearly five billion impressions online, the Flyers told AdWeek.

The key to Gritty's success, Heller explained, was softening his sinister edges with a general oafish appearance.

“We wanted monster-like features," Heller said. "When you look at the animation, he has some pretty built arms compared to his body. He has a dad-bod thing going on."