Dispatches from the Gayborhood: Voyeur 2.0, drag kings and JUNK 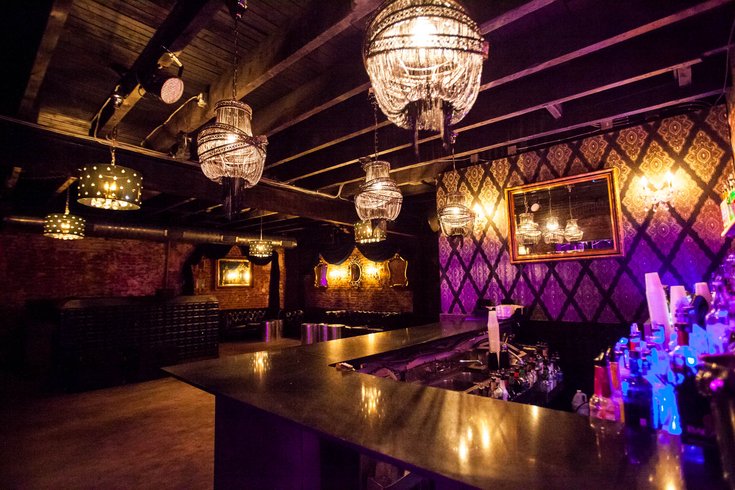 Voyeur's brand-new mezzanine lounge. The nightclub, owned by brothers Billy and Michael Weiss (who also own Woody's), coined the renovated space as "V.2" of the storied nightclub.

For months, there have been murmurs in the Gayborhood's nightlife scene about the 18,000-square-foot nightclub's apparent shift in audience. A "Voyeur 2.0" launch party in October celebrated renovations to the club but also appeared to prime it for an audience broader than the LGBT patrons who've long dominated its dance floor. The thought, of course, is that it's "gone straight."

But reality is a little hazier than that.

“When you have [a capacity of more than] 500, you can’t stay open with just a certain group of people,” Billy Weiss, co-owner of Voyeur Nightclub, told PhillyVoice. “There’s just not enough people. It’s not there. And that’s what was happening: If we didn’t have major parties or a big DJ, we’d have 300 or 400 people. And with a building this size, to staff it, that’s a losing proposition.

"We didn’t want to go out of business, so it really comes down to a business plan."

He added that many of the country's "big gay nightclubs," from New York to Miami, have shut down in the past decade. Many remaining clubs, he said, cap at 200 to 500 people; that's well below the 1,100-person capacity of Voyeur.

To boot, changing demographics in the Gayborhood -- namely, those folks wandering east of Broad Street for any number of Marcie Turney and Valerie Safran restaurants -- offer an opportunity for Voyeur to bring in potential party-goers who are already right outside the club's doorstep.

"You look at 13th Street, and this is the hottest neighborhood in the whole city right now -- by far," Weiss said. "So we have a good mix of people and we’re getting people who are not narrow-minded. Every walk of life is great together. And, you know, I think the best party is diverse. Black, gay, straight, lesbians -- everyone in one group is the most fun." 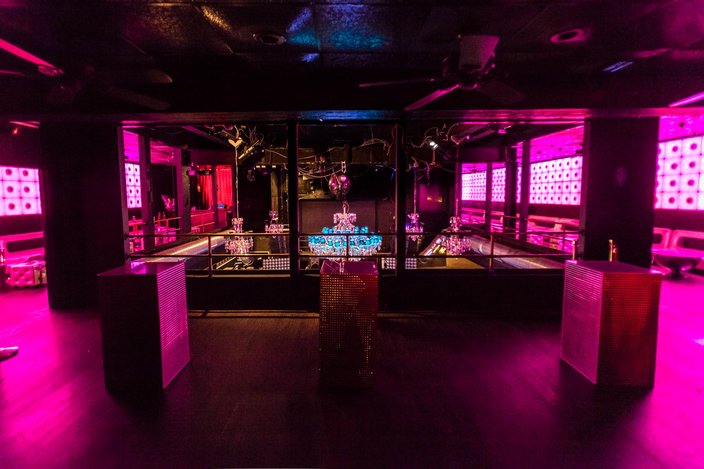 There's also the matter that clubs, at large, are constantly revamping -- Voyeur, even, has changed its name twice since the Weiss brothers took over in 1998.

"In the club world, generations are five-year generations," he explained. "Most people go out between 25 and 30 for these clubs. After 30, they don't really want the nightclub vibe anymore – they start going to restaurants, lounges, a little quieter. Somewhere where it’s not 'Boom! Boom! Boom!'"

So, what exactly is new about Voyeur that warrants the "2.0"? Quite a bit, as it turns out.

For starters, the interior has been dramatically upgraded: All three floors have been decked out with new sound systems, and there are LED walls and chandeliers, an LED stage floor, 48 strobe beams, 12 intelligent lights, a new DJ booth on the main floor, renovated bathrooms and a 12-by-8-foot video screen.

Beyond that, you'll notice a lot more Top 40 hits being played on the dance floor, parties you wouldn't have found there a few months ago (see: last weekend's Hair of the Dog after-party) and new staff members (eight former employees were let go for "accounting errors," he said). That's all rounded out with efforts to make the alley less "seedy," he said, which range from an off-duty police officer hired to monitor the corners of Camac, Chancellor and Locust streets, to a security line that now extends to 13th Street near Pizzeria Cappelli, or what is affectionately referred to as "Gay Pizza."

"You don’t get to say 'Give us equal rights, but no straights allowed.' That's not how it works." - Braden Chapman

Braden Chapman, who's long operated his "Drag Wars" event series from Voyeur, said he's not bothered by the change in direction (and will host "Drag Wars" there again in February).

"I don’t feel like Voyeur is any less welcoming of myself and LGBT entertainment," Chapman told PhillyVoice. "Unfortunately, it's not the '90s anymore, and with equality on the rise, it's less important for new millennials to have a 'gay-only' space. The fact that you can have straight people and gay people hanging out together is just a representation and byproduct of the equality and inclusiveness we’ve fought for since Stonewall.

"You don’t get to say 'Give us equal rights, but no straights allowed.' That's not how it works."

Carl Michaels, who's DJed at the venue since it was the Two Four Club, told PhillyVoice he's heard the "crazy conspiracy theories" about Voyeur's changing demographic, but that it's still largely an LGBT stomping ground -- but with a new sheen.

"I kind of liken it to a Vegas vibe, but without the pretentiousness and cost of being in a nightclub in Vegas," Michaels said. "It’s a reasonable experience, and there’s something for everyone there, too. They go out of their way to make sure the music vibe is different on each floor -- they want to make sure everyone who comes in has somewhere to go.”

Voyeur's gotten a face-lift, sure. But it's hardly lost its LGBT identity, which finds roots in its popularity as a disco club in the late 1970s. Just don't be surprised to spot a few hundred more LGBT allies shaking their booties to Beyonce on the dance floor during your next after-hours outing.

• Vogue for your life. The 21st annual Dorian Corey Awards Ball on Feb. 6 celebrates the best of Philadelphia's ballroom scene in a high-energy competition. "It's like the gay Oscars or Grammys," Alvernian Rafeek, organizer of the event, told PhillyVoice. "The ball was created in 1995 to pay homage [to] and recognize LGBT houses and persons who compete in the house ballroom scene, and to award them for accomplishments throughout the year for their respective categories." That said, even if lingo like "Vogue Femme" and "New Way" makes your head spin, don't feel too intimidated to come: The ball's open to dancers and onlookers.

• Closing time for Venture Inn. Venture Inn, a Gayborhood mainstay since the 1970s that had recently been trying to revamp with more (free!) programming, served its last drink on Sunday. No word yet on what, if anything, will take its place at 255 S. Camac St.

• Hello, it's Mimi. Mimi Imfurst, the former "RuPaul's Drag Race" contestant and Gayborhood drag staple, is crowdfunding for an album. The album, titled "Fire" to reflect what she calls the "transformative power" of fire as an element, ditches the drag gimmicks in favor of a guitar and bass drums. "I think there's a big group of gay people, and people who like drag, who also love rock 'n' roll," Imfurst told PhillyVoice. "There's a huge group of people out there being neglected by the music community -- myself included." Imfurst is raising $10,000 to cover costs of promotion and production.

• Toasted Walnut a work-in-progress. If you're scratching your head over why The Toasted Walnut at 1316 Walnut St. hasn't opened yet, don't fret: It's still on the way. Denise Cohen, the bar's owner, told PhillyVoice she opted to navigate a few design challenges that are easier to address now rather than after opening. Cohen's targeting late spring for an opening.

• Come at me, BRO. Gayborhood party producer Josh Schonewolf debuts his latest show, "BRO," at The Victoria Freehouse on Jan. 25. The cabaret is intended to be for male-identified performers, reclaiming what it means to be a "bro." Performers include Gayborhood boylesque darling La Dolce Spina and drag king Mr. Dan Mac, among others. A "straight-up classic king," Daniela Vitola, aka Mr. Dan Mac, explained to PhillyVoice the appeal of "kinging" has nothing to do with being trans; it's about exploration and expression of gender. "When I'm in a space I can explore masculinity, I feel like I can have so much fun and be free," she said. "It’s not about, ‘Oh, is that a man?’ It’s about the feeling ... That man is already inside you; you’re just trying to show it to everybody so they can marvel, have a good time and feel sexy.”

• LGBT night at the Flyers. LGBT nights aren't just for Phillies games anymore: You Can Play, which advocates for a more LGBT-accepting sports culture, has partnered with the NHL to host a night of festivities that honors Director of LGBT Affairs Nellie Fitzpatrick as "community teammate." Enter promo code "FLYOUCANPLAY" to receive a discount on tickets.

• Three new artists at William Way. You'll recall that trans artist Linus Curci was William Way's last resident artist. Through next month, pop by to see works from digital illustrator Ed Hall, who's displaying fantasy-themed digital illustrations; abstract painter Aaron Kalinay, who is presenting paintings inspired by Islamic fabrics; and Atlantic City-based photog Glynnis Reed, whose powerful "Ascending Beauty" series consists of portraits of black women and queer-identified people who've made an impact on her life. "It's important to me to continue this series to create a representation of black women and queer folks rarely seen in the context of pop culture," Reed told PhillyVoice. See the works through Feb. 28.

• Butch gets bulge-y. Party producer Butch Cordora, who hosted the "Bulge" underwear-only party at leather bar The Bike Stop from 2005-08, is bringing it back -- only this time, it's taking residence upstairs at Boxers. The lure: It's the only underwear night in Philly that actually makes the underwear mandatory. "Bulge is, and always was, a body-positive party," Cordora told PhillyVoice. "As in, it's more about freaks, fetishers and exhibitionists, versus having a six-pack and amazing body." The party, featuring DJ Arun, launches with a $5 cover on Jan. 21 at 10 p.m.

• Bye bye, Bowie. It's only fitting that the Gayborhood's "House of Weird" would be bringing in longtime WXPN DJ Robert Drake to say a proper goodbye to Bowie on Fri., Jan. 22. Because while the loss of Bowie is heartbreaking to any music listener, it's especially devastating to a community that cherished Bowie as one of few icons in pop music who represented all-around queerness. Drake at Philebrity explained the all-too-real Bowie impact last week: "As I begun to realize that I was different than other kids, I turned to Bowie – and those artists that followed him down his glittery runway – and realized that I wasn’t different after all," he said. "I was me."

• And all that JUNK. An annual wintertime party to watch for in Philly's LGBT community, Snowball at Union Transfer, is a fundraiser for dance-theater company JUNK. This year, attendees will get a sneak peek at their FringeArts show in September. "The work is loosely reflective of underground gay scenes from the '70s to '80s, with a strong nod to artists Robert Mapplethorpe and Tom of Finland," Brian Sanders, founder of the company, told PhillyVoice. "My work often features homoeroticism as part of its aesthetics, but I do try to keep my work 'gay-issue neutral.' Just presenting images and stories that happen to be homoerotic on occasion but inside content that anyone can appreciate or relate to."