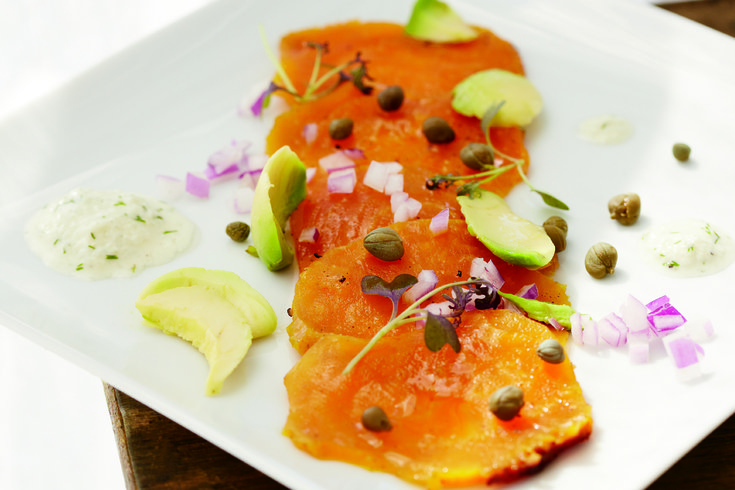 As the holiday season departs, many of us are putting away the sugar and pushing the white flour to the back of the pantry. At this point, healthy New Year resolutions are settling in, which means it's time to stop dreaming about cookies and start thinking about nutritious options for the dinner table. The obvious way to launch into a healthy 2016 is to begin incorporating more veggies into your diet.

We spoke with Vedge and V Street’s Kate Jacoby who has provided us with two produce-packed options to bolster your January eating agenda.

Along with Rich Landau, Jacoby is co-owner of two restaurants that not only dominate the vegan market of Philadelphia but also the restaurant world as a whole. With highly innovative, vegetable-focused dining options, the husband-wife duo has gained recognition nationwide. If you’re new to the idea of meat-free meals, there’s certainly no better place to start than with the creations from their restaurants. They are known to turn the heads of even the most diehard steak and lamb lovers and, in many ways, have helped redefine common conceptions of vegan food.

Of the tacos, Jacoby said, “Over the years, we’ve grown quite the reputation for our seitan. One of our favorite takes is char-grilled with za’atar spice over creamy tahini with grilled black kale and pickled turnips. We’ve also shredded it, braised it with cabbage and gochujang and served it with kimchi mayo for happy hour. But our most popular seitan dish has to be our BBQ. Whether it’s Jamaican or Southwest or Asian, seitan takes beautifully to BBQ sauce. Here we’re doing a Hawaiian-inspired recipes that works great hot or chilled.”

Don’t skip the Lomi Tomato Salad topping for your tacos, either. This is where the produce will play its part in boosting the nutritional value of the meal. Lomi is Hawaiian for massage, and in the culinary terms it means working salt into vegetables with your hands. Jacoby emphasizes that you needn’t be too rough; the technique is meant to act as a subtle way of working seasoning into every nook and cranny of the vegetables. It also helps produce to release its own juices into the dressing, which will amplify the flavor. If you have any leftovers of the Lomi Tomato Salad, Jacoby ensures that it lends itself well to a wide variety of other dishes. Consider serving the tomatoes atop salads, rice or noodle dishes. 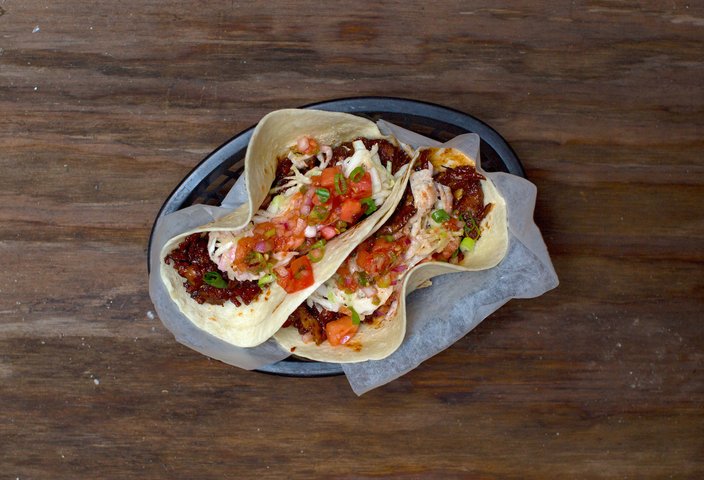 In a medium mixing bowl, combine the ketchup, molasses, 1 teaspoon of the sunflower oil, sesame oil, tamari, lime juice, ginger puree, cumin, pepper and Sriracha and whisk together until smooth. (Sauce can be stored in an airtight container and refrigerated for up to five days.)

Next, shred the seitan into thick chunks about 2 inches in length. Do not slice with a knife; rather, pull it apart with your hands to follow the natural break points and create a rustic effect.

In a medium mixing bowl, toss the seitan with the remaining oil and Latin spice until it’s evenly coated.

Heat a large sauté pan or skillet on high, then sear the seitan a little at a time until the edges are crispy and brown. Then slowly add sauce until seitan is evenly coated. Reduce heat to medium, stirring occasionally, until sauce caramelizes around seitan.

Heat tortillas on the open flame of a range or wrapped in foil in a 350 oven for 10 minutes. Then stuff tortillas with warm BBQ seitan and serve with garnishes of your choice such as the Lomi Tomato Salad. (See below.)

In a medium mixing bowl, combine all ingredients until vegetables are evenly coated. (Can be transferred to airtight storage container and refrigerated for up to two days.)

The taco recipe above comes from V-Street, which Jacoby describes as being the more casual brother to Vedge. The menu at V-Street is inspired by street food traditions, whereas Vedge strives for a more upscale, elegant vibe.

To get a taste of the latter, Jacoby selected the beet recipe, which she says could be considered a spin-off from lox and bagels.

“The salt roasting draws out extra moisture and intensifies the flavor of the beets, making them as sweet as candy and as silky as, well, something you might have put on a bagel once,” she explains. “Golden beets are quite different from red beets—almost everyone I know loves them even if they don’t care for reds. That could be because golden beets are a bit milder.”

Jacoby says not to be put off by the cook time for the beet recipe, which is around two hours when you include the roasting time for the beets. You can take care of the rest of the recipe while they are in the oven. 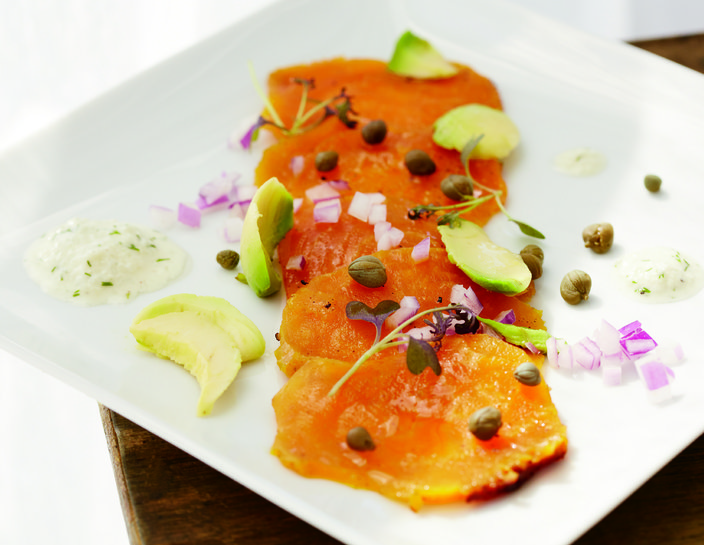 Pour the coarse salt onto a sheet pan, coating the entire bottom of the pan evenly in a thick layer. Arrange the beets in a single layer on the salt. Roast until fork-tender, about 2 hours. The skins will become very dark, looking nearly burnt.

Remove the pan from the oven and allow the beets to cool on the salt bed. When cool to the touch, peel the beets by hand or by rubbing them with a towel. Slice them into rounds no more than 1/8-inch thick. A mandolin works best or use a knife to slice them very thin.

Toss the beet slices in a large bowl with the oil, sherry vinegar, and 1 teaspoon of the pepper. Cover the bowl and refrigerate for at least 30 minutes but no longer than 24 hours.

To prepare the sauce, combine the cucumber, vegan mayo, dill, mustard, salt, and remaining 1 teaspoon pepper in a food processor. Pulse until the cucumber has broken down into very small pieces and the sauce is thick and creamy.

Fan the sliced beets on a large platter or on individual plates. Garnish with the avocado, capers, red onions, and a spoonful of the cucumber sauce.

Credit line: Recipe from Vedge: 100 Plates Large and Small That Redefine Vegetable Cooking, copyright © Rich Landau and Kate Jacoby, 2013. Reprinted by permission of the publisher, The Experiment. Available wherever books are sold.