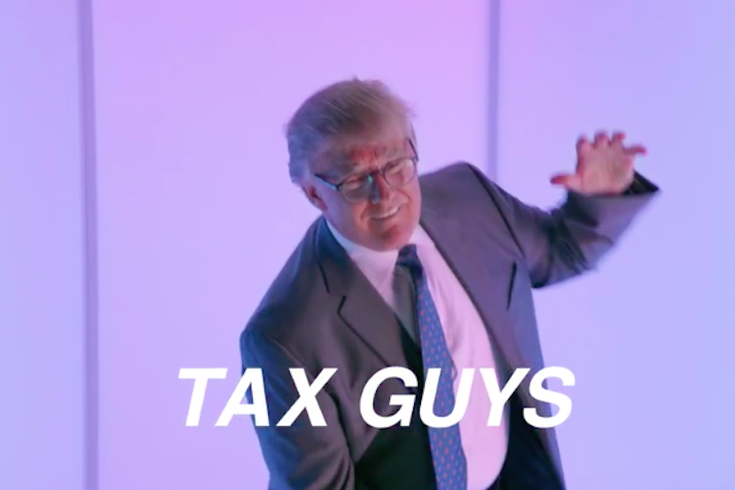 In the minutes leading up to the fourth episode in the 41st season of Saturday Night Live, some noble warriors took to Twitter and requested that fellow users of the social-media site avoid commenting on the program.

That is their right, and they should thank the troops for defending it.

So, too, should the folks who protested irl outside the SNL studios with a message that this week’s host, Donald Trump, is a xenophobic racist. There is some merit to their cries of foul, and they should not be dismissed outright as further Outrage Nation PC-flexing.

But with all due respect to their pleas, there was no way I was missing what was sure to be a train wreck of garish, hyperinflated-ego proportions involving a guy whose Atlantic City houses couldn’t even win without having to seek protection under ‘Merican bankruptcy laws not once, not twice, not even thrice, but four times.

From that perspective, disappointment was nonexistent.

Two overarching thoughts came to mind as I settled in to watch:

You. Will. Not. Write. A. Think. Piece. About what an off-script Presidential candidate getting a boatload of free airtime on a network on which he was a) a reality “star” of a certain magnitude and b) at war because of some of his more questionably moral stances says about America 2015-16.

Instead, present random thoughts thunk from 11:30 p.m. to 1 a.m. in an effort to examine whether Trump recoiled at having to mock his eminently mockable self or embraced playing a caricature of his persona, winking and nodding in that adorable aggressive-brouche style distinct to him? 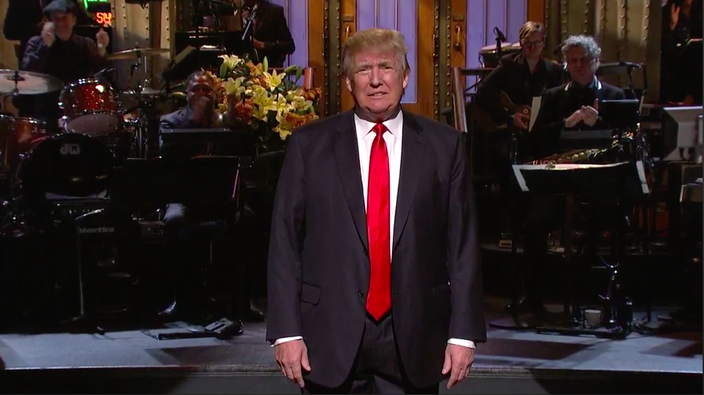 Trump wasn’t in the intro skit, but Larry David (as a spot-on Bernie Sanders) and Kate McKinnon (whose parody – ? – of Hillary Clinton gets better each and every time out) set a tone for an episode likely to be more politically focused than others. Because duh.

This guy’s so used to the stage that it’s hard to imagine he’d fall flat on his face, even as his eyes are so blatantly locked in on the TelePromptr so as to shut down any criticisms of Obama for said usage.

The challenge here was for SNL writers to figure out a way to parody a living, breathing parody. Not easy.

Having Trump, in the monologue “mistake” cast member Ady Bryant for Rosie O’Donnell – because they’re both big boned, roflmao – was emblematic of the near impossibility of this mission.

Having Larry David (not as Sanders) heckle “TRUMP’S A RACIST!” in an effort to procure $5,000 was good, though!

As for the “White House 2018” skit, several moments of comedic inspiration were evident.

They were Trump wife Melania (aka Cecily Strong) saying “See, I told you, he’s more than just dreams and a silly head,” "The Apprentice" villain Omarosa as Secretary of State saying Vladimir Putin cried big time after Trump called him a “loser,” the President of Mexico bringing him a “check for the wall” and the notation that “Everyone loves the new laws you Tweeted.”

The winking and nodding that speaks to the person being mocked being in on the job? Not so much.

When Trump explained he’d “livetweet” a sketch because “I was too busy and I just didn’t want to rehearse,” it spoke to someone who got the benefit of all that free TV time without putting in the necessary work. So, the writers scrambled and found a good angle to carry the next few minutes.

Moral of that story: People shouldn’t be as scared of what a blowhard says about them on Twitter as the characters in that skit were. Was that their point? Who knows. Wish people were allowed to discuss this on Twitter without facing the judgement of those who said they shouldn’t Tweet about it.

But, real talk, after the first Sia performance, trying to ascribe words to Trump’s appearances has gotten rather tiresome. Let’s check Twitter for a second:

Shudder to think what Trump's most rabid followers had to say about that Sia performance....

Watching #SNL and can't decide who has the worse toupee- Trump or Sia?

I'm sure #trump would agree. #Sia an average talent and a total loser. Should be deported.

Trump as a “laser artist” in the next sketch, and an auto-tune producer in the next one, came off as stilted and contrived. Yawn. It's getting late.

End of the day, I kinda get why SNL got conscripted into this mess. Ratings, etc.

And why people felt the need to get all William Wallace in opposition to Americans commenting upon it on Twitter. Everybody's every thought must be heard at every moment, etc.

Trump was far from the worst host the show's ever seen.

Still, it's a shame that the episode didn’t work as comically well as, say, Ben Carson heading to 30 Rockefeller Plaza to mount the stage and hold court about stabbing imaginary friends and the Great Pyramids of Giza serving as grain silos would.