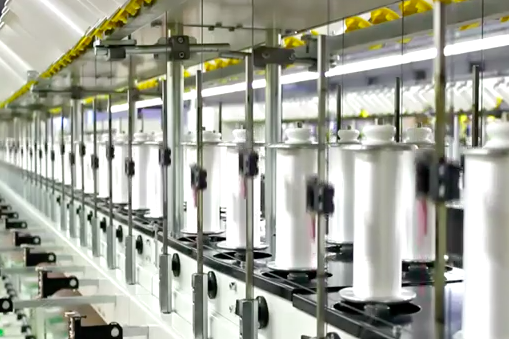 In a bid to spur American innovation in advanced textile manufacturing, the United States Department of Defense has selected Drexel University to lead the mid-Atlantic region in a combined $317 million public-private national research initiative.

The goal of the non-profit institute, known as the Advanced Functional Fabrics of America, is to create a resource center for the development of manufacturing processes that will enhance the value of U.S. products on the international market. Falling under the umbrella of the National Network for Manufacturing Innovation Institutes, the collaboration encompasses 31 universities, 16 companies and 26 incubators and venture capital firms.

Researchers will focus on developing applications for new fibers and textiles, including functional and sensory advances to components used in the aerospace, architecture, apparel, defense, and health industries. Projects will include modeling and designing new methods for rapid textile prototyping and predictive simulation of manufacturing processes for yarns, fibers and other functional fabric materials.

“The fact that the DoD has identified functional fabrics as a critical focus for U.S. advanced manufacturing is validation for Drexel, where we’ve been working on smart textiles for nearly a decade,” said Drexel President John A. Fry. “We’re proud to be a leader in launching this new industry with our public and private partners in AFFOA. Drexel’s commitment to interdisciplinary translational research as an economic driver led directly to this moment.”

To obtain the $75 million commitment from the Department of Defense, Drexel and its AFFOA partners minimally needed to match that figure. Joined by the Massachusetts Institute of Technology and Cornell University, AFFOA wound up securing $317 million after raising enough money for a 3-to-1 match, according to the Philadelphia Business Journal.

The research initiative will be headquartered in Cambridge, Mass., while Drexel will lead a local group comprised of researchers from Temple University, Philadelphia University, Penn State and Carnegie Mellon, as well as local associates ranging from DuPont and Ben Franklin Technology Partners of Southeastern Pennsylvania to the City of Philadelphia Office of Manufacturing and Industry.

“Drexel played a central role in assembling this group of governmental, academic, and industrial visionaries who are all motivated by the goal of advancing a new model of American textile manufacturing and helping to develop new products for the public and defense sectors,” said Aleister Saunders, PhD, Drexel’s senior vice provost for research and a leader of its functional fabrics center. “Drawing on Drexel’s intellectual capital and our momentum as a regional economic engine, we’ve been able to gather a critical mass of regional partners thus ensuring that the progress we’ve made in the Southeastern Pennsylvania region can be replicated at a national level.”

Industry partners participating in the research initiative include NIKE, Microsoft, Goodyear, The North Face, Bose, and Medtronic, who will supported by venture capital groups such as Angel Capital Association, Westbury Partners and North Bridge Venture Partners.

At Drexel, the new AFFOA funding, distributed over five years, will bolster a promising batch of current textile research initiatives. Smart supercapacitors that store energy for wearable technology will move toward the elimination of batteries for energy harvesting devices, while researchers will refine products like a bellyband for uterine monitoring, touch-sensitive robotic skin and a haptic glove for hand therapy.

Drexel will house the new manufacturing facilities at the ExCite Center, with plans to expand into the $3.5 billion Schuylkill Yards development introduced last month in a partnership with Brandywine Realty Trust.

“Currently there are no industry standards for introducing new materials into textile manufacturing, and this is one of the main obstacles blocking U.S. manufacturing from making a big leap forward,” said Genevieve Dion, an associate professor in the Westphal College of Media Arts & Design and director of the Shima Seiki Haute Technology Lab in the ExCITe Center. “If we can bridge that gap by offering the research and testing necessary to establish standards and develop processes for using new materials in manufacturing, this institute can remove that roadblock so our nation’s economy can move forward.”