Drexel University says it is discontinuing a survey sent to sorority members after it sparked online outrage over the wording in a section about sexual assault.

The survey was sent Friday to members of the university's Office for Fraternity and Sorority Life, which serves more than 30 Greek-letter organizations and more than 1,700 undergraduates in the that community. A screenshot of the survey has been circulated on Facebook this week among those angry with its distribution.

The beginning of the section includes a trigger warning at the top and asks students to skip the questions if they feel uncomfortable answering them.

Saying it was aiming to measure sorority sisters' attitudes about sexual assault, the survey presented the following statements and gave the answer choices of "strongly disagree," "disagree," "neither agree nor disagree," "agree" or "strongly agree":

• If one of my sorority sisters got too drunk at a party, it would be partially her fault if she had sex with someone and didn't really remember what happened the next day.

• If a sister goes upstairs to a guy's bedroom at a party, it is her own fault if something bad happens to her.

• If a sister is acting like a slut, it is only a matter of time before a guy tries to take advantage of her.

• If a sister goes to a party dressed like a slut, she is probably looking to hook up.


Some students took exception to the wording of the section. 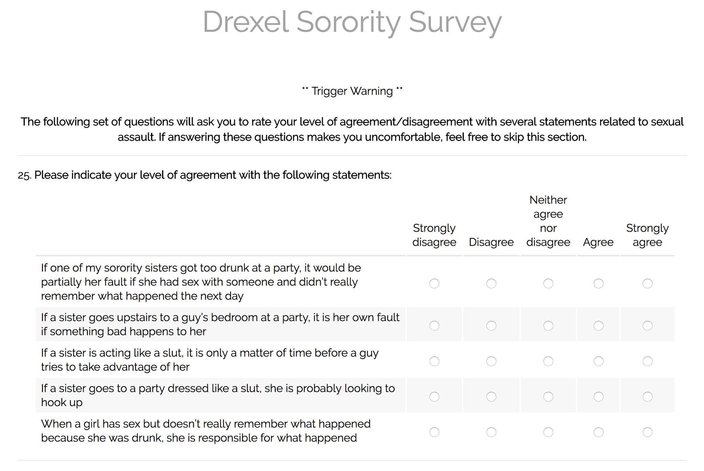 This screenshot shows a portion of a survey sent to sorority members at Drexel University. The questions about attitudes regarding sexual assault made some students angry because of their wording.

"It is beyond me how this survey could have gotten approved," wrote Emily Long in a Facebook post that's been shared more than 80 times. "It is absolutely counterproductive to use this language in an effort to change the 'rape-supportive attitude' on campus – and I encourage all friends to reach out to Drexel's FSL staff so that we can make an impact on ending the rape culture in our society."

Long, whose Facebook profile indicates she's a Drexel student, said she wanted the survey to be followed by a "positive" response, and hoped Drexel would move forward in a way that "better exemplifies the school and it's (sic) attitude toward women."

In a post shared more than 70 times, Caroline Scheinfeld, a 19-year-old digital media major,  wrote that she pays "way too much money to be called such offensive names" by the institution responsible for her education.

"This biased diction has no scientific purpose and is highly misleading," she wrote.

"The question could have been written in a variety of ways without ever using a derogatory term used to put down women who are casual or open with their sexuality." – Drexel student Caroline Scheinfeld

Specifically, Scheinfeld said, the use of the word "slut" was entirely unnecessary.

"When collecting data for research purposes, it is extremely important not to use leading language," she told PhillyVoice in an email. "The question could have been written in a variety of ways without ever using a derogatory term used to put down women who are casual or open with their sexuality."

Both Long and Scheinfeld urged those who read their posts to contact FSL administrators.

Asked about the survey, Drexel spokeswoman Niki Gianakaris forwarded PhillyVoice an email from Subir Sahu, vice president and dean of student life, that was sent to frat and sorority members who received the survey. The school isn't "going beyond that" to comment, Gianakaris said.

"One of the survey sections used language that is offensive in an attempt to measure attitudes about victim blaming," Sahu wrote in the email. "The structure and language used in the survey were not intended to convey the views about fraternity and sorority life at Drexel of either the researchers or Drexel administrators."

The email says that because of concerns raised about the survey it would no longer be administered. Sahu added that he was looking forward to "continuing the assessment of our Greek chapters in other ways."

"The students who voiced concerns I think probably care a lot about rape culture at Drexel and generally." – Dyad Strategies CEO Gentry McCreary

Scheinfeld said she was grateful the university responded, and said she's been in touch with administrators about the best way to move forward with the conversation.

According to the email, Drexel contracted Florida-based company Dyad Strategies to review Greek life at Drexel and create the survey.

Dyad's website says the company "helps college campuses and fraternal organizations measure and improve their impact and better understand the culture of their fraternity and sorority chapters." It lists Villanova University, Cornell University and the University of Georgia among its clients.

Asked about the backlash, Dyad CEO Gentry McCreary said he was "disappointed" in Drexel's decision to pull the survey.

McCreary said Drexel had an opportunity to review the survey before administering it, and added the same survey has been distributed to tens of thousands of students nationally.

"The students who voiced concerns I think probably care a lot about rape culture at Drexel and generally," McCreary said.

He said by pulling the survey, Drexel missed an opportunity to open a dialogue about sexual assault, which was its intended purpose and a highly-publicized issue at the school this past year. 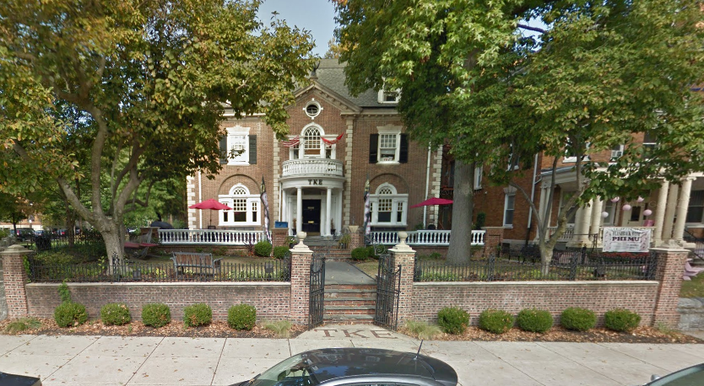 In May, rapes were reported in the school's daily crime log at the Tau Kappa Epsilon and Pi Kappa Alpha fraternities.

TKE, which was already under an interim suspension because of two sexual assault investigations, was suspended for five years for violating the school's alcohol policy and other regulations.

While fraternities often draw the headlines, Scheinfeld pointed out that sexual assault isn't isolated to Greek life, citing statistics from the Rape, Abuse & Incest National Network that say almost a quarter of all undergraduate female students and about five percent of male students report they were raped or sexually assaulted.

Framing the conversation correctly, she argued, has a big effect on how it progresses.

"We are all here in this position now because the conversation has changed and the women of this university find the use of the word 'slut,' whether shouted as a slur or written within a research study, unacceptable."